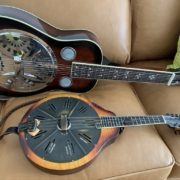 Aluminum resonator (“resophonic”) instruments were an early 1900s attempt to mechanically amplify string instruments. Their time in the sun was rather brief – mainly the late 1920 – because as soon as there was a decent sounding and reasonably affordable resophonic instrument, the technology was outdated and completely superseded by electric amplification. There is a small niche for modern versions and I just added an 8-string resonator slide guitar to provide some company for my (modern) National resonator mandolin. 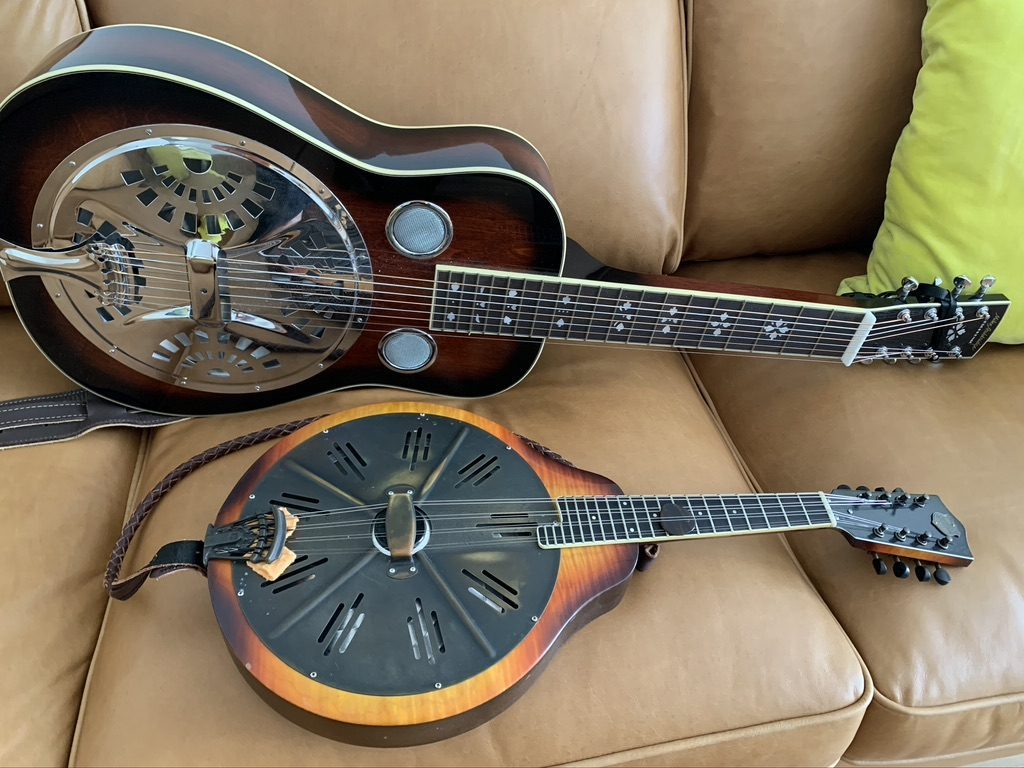 The best known effort was by Los Angeles instrument repairman/inventor John Dopyera who built a “resophonic” (or “ampliphonic”) guitar for the musician George Beauchamp. Together they founded the National Company and the instruments quickly became popular, especially for the then hugely popular Hawaiian slide guitar style. And that style urgently needed something punchier than regular guitars played with a steel bar.  Their collaboration did not last long and Dopyera left the National Company in 1929 to start the competing “Dobro Manufacturing Company” with his brothers. Dobro was a contraction of “Dopyera brothers”, but conveniently also meant “good” in their native Slovak language, an idea reflected in the company motto “Dobro means good in any language.” National and Dobro did not compete for long and merged into the National-Dobro Corporation in 1934. By then the decline of resophonic instruments was already under way because electric amplification rendered mechanical amplification instantly obsolete. At that time, the only reason for resophonic instruments was added volume and that advantage was gone. For the next decades, the electric steel guitar ruled (before it fell out of fashion itself): The Forgotten Steel Guitar

Beauchamp himself had started a new company with Adolph Rickenbacher in 1931 that sold electric steel guitar. National-Dobro moved from Los Angeles to Chicago and started building electric instruments. After 1941, National did not produce any original resonators and those designs were only revived by National Reso-Phonic Guitars, a San Luis Obispo company founded in 1989. Production of resophonic instruments under the Dobro label also ended in the 1940s, but Dobros had an earlier revival caused by bluegrass. 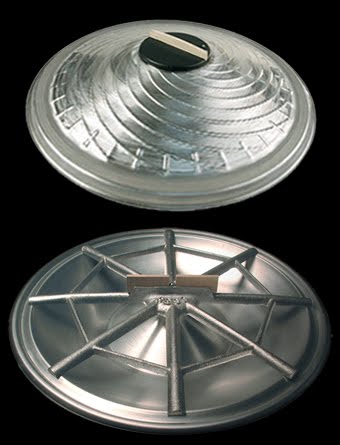 The main difference between National and Dobro instruments is how the aluminum resonator cone amplifies the string vibrations through the bridge. National instruments have a resonator in a mountain shape – it is lowest at the edge with a peak in the center. A wooden disc (“biscuit”) is glued to the peak and the bridge sits on the biscuit. Dobros turn the resonator upside down, it is a valley (lowest in the center). On top is a “spider”, a cast metal framework, and a threaded bolt connects the center of the bridge through the spider to the bottom center of the cone. While necessitated by patent restrictions, both designs work well. I now have one of each.

Resonator instruments have their own timbre. Neither like a typical acoustic (wood only) instrument nor like an electric. A bit metallic, sometimes rather rough, but that is exactly what blues players like, like Bukka White in this video.  My mandolin can be very loud, so the mechanical amplification does work, but played gently has an attractive tone on its own.

Dopyera was not the first builder of metal resophonic instruments. That credit may belong to Augustus Stroh, who got a UK patent for a violin in 1900 on “Improvements in Violins and other Stringed Instruments”. His patent described a flat metal diaphragm to mechanically amplify the sound and a year later extended the concept to a conical resonator with corrugations at its edge, allowing a more ‘rigid’ diaphragm. He never registered his inventions in the USA, otherwise Dopyera and Beauchamp may not have been able to get their Nati0nal design patented.

The Stroh violin was an expensive instrument, roughly 6 times the price of a decent factory violin. Combined with its rather shrill tone, lacking the more appealing characteristics of a violin, it never received widespread acceptance, not even briefly. It remained a rarity, although it has been the trademark of the Irish fiddler Julia Clifford (but I think most of her recordings were on a regular fiddle). Surely more appropriate for Sliabh Lucra polkas in a noisy pub than for a Beethoven string quartet in a recital hall 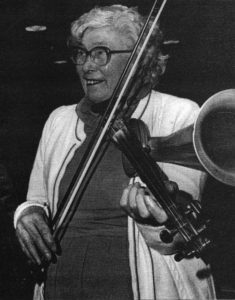 Julia Clifford and her Stroh fiddle

The Enduring Charm of Obsolete Instruments