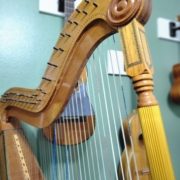 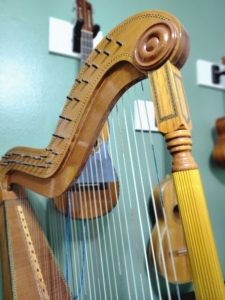 Son Huasteco and Son Jarocho are two regional folk music styles from Mexico I find particularly attractive. Mexico has a range of local acoustic styles (often called “Son”, followed by their geographic location) that feature fiddle and several guitar-like string instruments. Lovely styles, but not as widely known or heard as their noisier or flashier relatives Norteño and Mariachi (who both are probably much younger, too!). Mariachi has been considered so important to Mexican culture that it was added in 2011 to UNESCO’s List of Intangible Cultural Heritage .

[An unrelated aside: Last year, the Kaustinen fiddle tradition in Finland was added to UNESCO’s Cultural Heritage list.  Here is a Folkworks column I did 10 years ago with Kaustinen fiddler Antti Järvelä teaching a traditional polska.]

Hermanos Herrera is a musical group of five brothers and their sister that plays several styles of traditional Mexican music, especially Sones Huasteco and Jarocho. Brothers Jorge Andres and Luis Albino started performing son Jarocho in 1986 and over time all their siblings joined. Hermanos Herrera have nine recordings under the Sonbros Record label and a 2017 release under Smithsonian Folkways Recordings. It is definitely a Southern California band: All 6 members of the band are graduates of UCLA.

Hermanos Herrera will be at the 2022 Topanga Banjo and  Festival, which is returning after the forced 2-year hiatus due to the Covid epidemic. Until 2020, the festival had been held continuously since 1961. I talked to Jorge Andres Herrera about their music and Mexican fiddling.

Roland Sturm: I love your wild fiddling on the Son Huasteco recording. Where does it come from?

Jorge Andres Herrera: The Son Huasteco is a form of traditional Mexican music that takes its name from the Huaxtec/Huastec indigenous group that inhabits the northeastern area of present-day Mexico. The word “son” in Son Huasteco, is used to describe the amalgamation of Spanish, indigenous Mexican, African, and other music styles and influences that evolved after the arrival of the Spanish in 1519, and during the colonial period of Mexico from 1521-1810.

Roland Sturm: It certainly has a different feel from other fiddle styles.

Jorge Andres Herrera: Violin performance techniques and style found in Son Huasteco (also known as Huapango), are unlike any that exists. However, it is not just the violin, but the pairing with a huapanguera, eight-string bass guitar-like instrument, and jarana huasteca, a small five-string rhythm guitar. The huastecan violin floats above the fixed pulsating rhythm provided by the jarana and huapanguera in a distinctive unpredictable flight pattern that captures the attention. The instrument itself is the same violin as in classical music, but the playing style and technique differ. A violinist will drag the timing and drag the notes, and also rush the timing and the notes as they weave in and out of the rhythm set by the huapanguera and jarana huasteca in a sort of musical game. Additionally, Son Huasteco is found in a variety of states and regions throughout northeastern Mexico, and also Mexico City. Each of these states and regions perform the son with stylistic difference that only the trained ear can distinguish. In fact, our group Hermanos Herrera have been performing Son Huasteco since the early 1990s, and only in the last several years have we tried to change our performance style to match some of the great trios such as Trio Tamazunchale, Caporales de Panuco, and Cantores de Panuco. While most trios throughout the region play similar songs, or sones, the same son can sound completely different as interpreted by different trios.

Roland Sturm: There is also a fundamentally different pulse to the music than in Norteño, which sounds very central Europe to me: The duple meter,  heavy down-beat of German oompah bands, accordion.

Jorge Andres Herrera: Most songs from the Huastecan region are in 6/8 meter, so that gives it immediately a different feel from polkas. The 6/8 meter is also common in other son traditions, including the only from Jalisco that morphed into Mariachi. And definitely not used in Norteño at all. Much of the 6/8 feel found in son music throughout Mexico can be directly correlated to the West African rhythms brought to Mexico during the early to mid 16th century.

Roland Sturm: Would there be any particular great Huastecan fiddler you want to call out?

Jorge Andres Herrera: I have my favorites, but it is not an entirely fair question because it is the complete group that makes a Son Huasteco trio great. Not the solo violin, or the abilities of the jarana and huapanguera. It is the entirety of the trio and how well they blend together and anticipate each other’s improvisatory flairs. Some of the all-time great trios include Camperos de Valles, Cantores de Pánuco, Trio Camalote, Hermanos Calderón, and Trio Armonía Huasteca. Each of these trios comes from a different part of the northeastern region of Mexico. They all have distinct styles reflecting their surroundings and the previous musicians from who they learned. 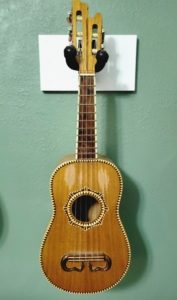 Roland Sturm: There is also an unusual singing style, sort of a Mexican yodel, where you switch into a high falsetto at the end of a phrase.

Jorge Andres Herrera: That is largely a Son Huasteco/Huapango thing. Son Jarocho, from the state of Veracruz, also has a high vocal timbre, but it does not use the falsetto technique of the Huapango.

Roland Sturm: Another unexpected instrument is the harp in some of your songs.

Jorge Andres Herrera: The harp is used in Son Jarocho. That is my brother Jose Marcelino and his 36-string harp. A traditional style rooted in Veracruz, but we have some Californian influences as we learned from our father and uncles who also perform Son Jarocho.

Roland Sturm: How did you learn this music?

Jorge Andres Herrera: It is an aural tradition and was passed down to us by our father, uncles, and several masters of these traditional son genres in Mexico. This aural tradition is still employed and we are passing on what they’ve learned to our own kids.

Jorge Andres Herrera: Yes, we continue to promote cultural awareness and appreciation of their Mexican heritage with musical presentations and workshops at both the elementary school and collegiate levels. We have raised over $100,000 with our music for the community and have assisted in countless fundraising and community service events, educating children and assisting those in need. In 2015, Hermanos Herrera joined the nationwide campaign to encourage Latinos in the United States to attend and graduate from college and created a theme song that became the campaign anthem for Univision’s Education Week, October 5-12. We are also very proud of the “Sol Poniente” Lifetime achievement award in Veracruz, Mexico, in 2009, for being ambassadors of the Son Huasteco genre.