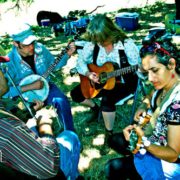 You Will Be Bowled Over

Jim Bowles,
Snapshots of Old-Time Music in Los Angeles
and a Fiddle Lesson

The legend of Jim Bowles… He’s a household name in many musicians’ homes but I’m still amazed at how many old-time players haven’t heard him. One reason may be the lack of available recordings. Old-time guru Jim Nelson recently informed me that he plans to re-issue the old Marimac recordings of this Kentucky legend in the not too distant future! This is definitely something to look forward to. 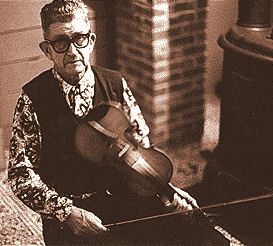 Jim Bowles was born in 1903 in South-Central Kentucky. Monroe County was a highly musical area and Jim had many influences, from local African American fiddler Gilbert Maxey to recording star Fiddlin’ Arthur Smith. He played clawhammer banjo, finger-style banjo, and sang but his fiddle playing is what caught my ear. It is infectiously rhythmic with a very deliberate use of blue notes that gives me goose pimples. His repertoire is also very interesting with crooked passages and bizarre melodies. I find many parallels between his playing and the playing of one of my favorite modern fiddlers Dan Gellert. In fact, you should check out Dan playing a Jim Bowles tune. There’s nothing like it!

Recently we just had the 6th Ever  Los Angeles Old-Time Social. It was a smashing success yet again. Performances, dances, workshops and jams lasted for 3 days. Old Sledge, Evie Ladin, and Gene Burdo with Tom Sauber rocked the joint and Sausage Grinder/Triple Chicken Foot aggressively sawed and plucked for the square dance. It was packed, sweaty and super rollicking. It was a no-brainer this year when I was asked to teach a fiddle workshop at this year’s Social. I taught two Jim Bowles tunes. One was his version of Shortnin’ Bread, called Kate’s Got a Wooden Leg. It has a very carefully placed blue note that makes all the difference in the universe. The other was his version of Christmas Eve. This tune is hypnotic and open to beautiful syncopated variations in the low strain. I feel it would take a lifetime to explore the possibilities. The sweet thing about these tunes is that they only take minutes to learn. 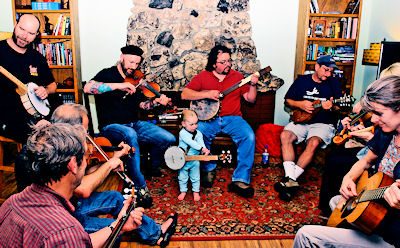 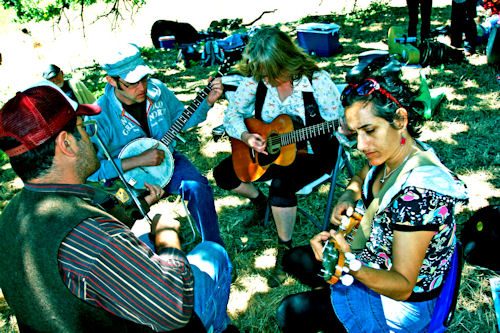 Aside from the Squarevolution dances , the Old Time Social, a host of old-time-only jams throughout the city and the Topanga Banjo & Fiddle Contest there’s been a lot of old-time/traditional music activity in my neck of the woods this year. I recently hosted a Cajun workshop with fiddler David Greely of Steve Riley and the Mamou Playboys, which sold out in less than one day. It was a grand day of Cajun history, Balfa/McGee fiddle tunes, ale and gumbo.  And he will be back for another! The success of Greely’s workshop has forced me to open up the lounge for future old-time music workshops. If interested, shoot me an email for updates. Also 2011 has been a year of throwing numerous impromptu jams for my students (and local musicians) at my Tiki Old-Time Jam Lounge. Additionally, I will focus on throwing many more student jams as well! Since this year’s Social, Mr. Bowles has been with us in spirit at my “Tiki” jams. “Kate,” Christmas Eve and Black Eyed Suzie have been in steady jam rotation. Thank you Jim!

For you fiddlers, here are a few mp3s to get you started with some Jim Bowles tunes. Kate’s Got a Wooden Leg is in standard tuning, key of G. Christmas Eve is in high bass tuning (ADAE), key of D. As always, I’ve included some bowing possibilities. Happy bowing!

You Will Be Bowled Over