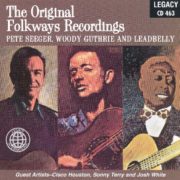 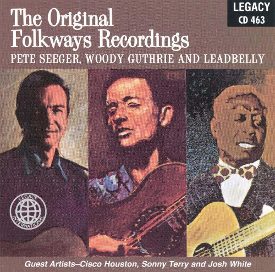 Woody Guthrie, The Dust Bowl Balladeer, came along during the Dust Bowl and Great Depression and put an indelible stamp on how we remember both: his Dust Bowl Ballads contributed part of the soundtrack to John Ford’s movie version of John Steinbeck’s Grapes of Wrath, including the theme song he recommended to Ford, Going Down That Road Feeling Bad. After the movie came out, Guthrie wrote his own version of the story, Ballad of Tom Joad, a sixteen-verse epic song that upset Steinbeck so much he sent a post card to Woody, saying, “You sonofabitch! It took me 250 pages to get the Joads from Oklahoma to California, and you did it in two verses.”

Lead Belly is the most important folk singer of the 20th Century—but don’t take my word for it: that was Woody’s opinion. His repertoire was inclusive and extensive—not just blues, and not just spirituals, or protest songs, or children’s songs, love songs or ballads—he did them all; and his theme song, Goodnight Irene, was Life Magazine’s choice for the Song of the Half-Century in 1950—having been Number 1 on the Hit Parade for a record 13 weeks as recorded by the Weavers after Lead Belly’s death on December 6, 1949. The King of the 12-String Guitar made it a favorite folk instrument since his passing. And his Negro Folk Songs for Young People was the first album on the Folkways label.

Pete Seeger, “America’s Tuning Fork” and leader of The Weavers, almost single-handedly created the Folk Revival of the 1950s and ’60s, even though he was black-listed for seventeen years—from 1950 to 1967. The Smothers Brothers broke the blacklist in American music by putting Pete on their program—twice—in both 1967 and again on February 25, 1968—when he performed his classic anti-Vietnam War protest song, Waist Deep In the Big Muddy, inspiring Walter Cronkite to use the phrase “We are mired in stalemate” two days later on his historic broadcast describing the war as “unwinnable.” Pete’s song was the protest of an American World War II veteran—not a sixties pacifist.

Pete then went on to build the Sloop Clearwater to clean up the Hudson River—at the time America’s most polluted waterway. He sailed up and down the river and stopped along the way to hold informal concerts with his musical crew and teach children the importance of protecting the environment. Finally, it was Pete who taught We Shall Overcome to Dr. Martin Luther King, and changed the word “Will” to “Shall Overcome.” From his resistance to McCarthyism and HUAC to the Civil Rights Movement to conservation and saving the Earth, Pete was a symbol of “the Power of Song.”

But why bring them up now? With all the new shades of political opinion and topical troubadours trying to make sense of it and be a meaningful part of whatever resistance is out there, why stay in touch with the old-time singers and songwriters whose work is now a part of history and the museum of American folk music they belong in? What can they possibly tell us about this new time and recast America?

Well, as it turns out, you don’t have far to look. Woody Guthrie, unlikely as it may seem, has already written the best anti-Trump we have—not about Donald Trump, but his father Fred—who just happened to be Woody’s landlord when he lived in a place euphemistically called “Beach Haven,” in Brooklyn, December, 1950. Like father, like son they say, and Arlo’s daughter Sarah Lee and son-in-law Johnny Irion, who perform together, have already recorded his “blistering broadside,” adapted from his Dust Bowl ballad I Ain’t Got No Home, Old Man Trump.

I just cain’t pay this rent!

My money’s down the drain!

And my soul is badly bent!

Where no black ones come to roam!

And in Arlo Guthrie’s recent concert at the Saban Theatre in Beverly Hills, he sang Plane Wreck at Los Gatos as if it had been written yesterday—not in 1948—and spoke to the oppression of today’s immigrants and DACA dreamers:

Goodbye to my Juan

All they will call you will be ‘deportee.’

My unconscious—via Sigmund Freud’s Interpretation of Dreams—recently taught me what Lead Belly still means to me, on the night before FolkWorks second Folk/Roots Festival on Saturday, March 24, when I was scheduled to be in a workshop and following panel discussion of protest songs. I wanted to keep it simple and just planned on bringing my six-string guitar. But I had a terrifying nightmare that was utterly real, in which someone stole my 12-string guitar and I was not able to bring it to a folk festival. It went on for too long, and I woke up in a cold sweat—finally relieved when I realized it was only a bad dream, and I still had my great old Guild 12-string, on which I played Lead Belly songs.

Upon realizing how much it meant to me, I resolved to take it to FolkWorks’ festival, just to be able to play Lead Belly’s classic Bourgeois Blues—the song he wrote in Washington, D.C. in 1935, when he learned that no hotel would rent him a room due to the Jim Crow housing laws, even though John Lomax had invited him there to record his repertoire for the Library of Congress. How could I even think of doing a workshop on protest songs and not do Lead Belly’s protest song—which I recorded in my Autry Museum concert on the greatest protest songs of the 20th Century? Thank you, Dr. Freud!

As for Pete, without him where would we all be? Teaching at a college or working at a bank, no doubt. Pete gave me the license to be a folk singer when he invited me to stay at his handmade log cabin in Beacon, New York, in 1979. Actually Toshi invited me to stay, but it was Pete who made me a memorable three-egg omelet upon waking up and talked my ear off while he was out chopping wood with his long-handled ax—to go with his long-neck banjo. That’s where he taught me his Earth Day song, My Rainbow Race, written in 1970 soon after the first Earth Day was passed by Wisconsin Senator Gaylord Nelson (D). He put songwriters to work all over the country, to start writing Earth Day songs and spreading the word about conservation. I did both Tom Paxton’s song Whose Garden Was This? and Pete’s My Rainbow Race at the festival workshop to show how these old songs have not yet become outdated:

One blue sky above us

One ocean lapping all our shores

One earth so green and round

Who could ask for more?

And because I love you

I’ll give it one more try

To show my rainbow race

It’s too soon to die.

As always with Pete, when others find nothing but despair and giving up hope, Pete finds reasons for optimism and celebrating the power of song to change the world. He is the benchmark for why folk singers are able to do what Gil Turner urged us to do back in 1962— Carry It On. Pete’s the reason I also brought my longneck 5-string banjo to FolkWorks Folk/Roots Festival. As Arlo reminded us at his concert, “Funny how the old songs hold up when you need ‘em from time to time.”

For additional first-hand experience of Pete’s legacy go to the Grammy Museum’s new exhibit, “How Can I Keep From Singing: The Work of Pete Seeger,” open until mid-September.

Sunday May 20, Ross Altman sings their songs and tells their stories at Topanga’s 58th Banjo-Fiddle Contest and Folk Festival on the Railroad Stage at 4:30pm.

Saturday May 19, the 93rd anniversary of Malcolm X’s birth in 1925 Ross Altman performs “Malcolm, Martin and John” at the Claremont Folk Festival.

Ross Altman has a PhD in Modern Literature from SUNY-Binghamton; he belongs to Local 47 (AFM); Ross may be reached at greygoosemusic@aol.com