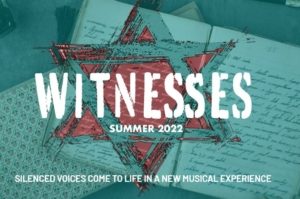 Those of you who know me also know that I am as much an enthusiastic fan of live theatre as I am of live music.  However, it isn’t very often that I have the opportunity to learn about a new show in time to let my FolkWorks readers know about it before its run is over.  My last column was the first time I have been able to do this, letting everyone in on the Clancy Brothers tribute “Tommy and the Brothers” which hopefully will be coming your way in Southern California soon. Keep checking the website for new dates.

I have recently learned about another theatrical “work in progress” scheduled to open in July. Titled “Witnesses,” it is a musical based upon the diaries of five Jewish teenagers who kept journals of their everyday lives as the Holocaust approached. Sadly, none of them survived, but their journals are a testament to what their lives were like during this tragic period of world history. Some of their stories were the subject of a book by Jacob Boas, published in 1995, titled “We are Witnesses”.  The book for this musical is written by Tony, Emmy, and Writer’s Guild Award winner Robert L. Freedman; Director J. Scott Lapp brings over 30 years of international directing experience and multiple awards to this show.

My first thought upon reflection was “how in the world can stories like this be turned in to a musical?  My question was easily answered when I went to the website to hear the song “We Will All Be Witnesses” which you can hear for yourself here:  https://artcenter.org/education/ccae-conservatory/witnesses/.

Each member of the musical creative team has a substantial resume in musical theatre which can be found by clicking on “The Creators” on the website above. The team is broken into five groups, each group dedicating itself to songwriting for one of the five teenage witnesses: Moshe Flinker, Dawid Rubinowicz, Yitskhok Rudashevski, Éva Heyman, and Renia Spiegel.

One of the musical creators, Gerald Sternbach, spoke about the show in an interview with Rabbi Ron Li-Paz of Valley Outreach Synagogue where he is the musical director. The entire You Tube is 17 minutes long and covers the composer’s considerable background and credits but for those who want to get right to the story of Witnesses and another song from the musical, forward the video to 12:52:

The show is presently scheduled to open at the California Center for the Arts on July 15 and runs through July 30 according to their website.  One thing that I know for certain is that this San Fernando “Valley Girl” will be heading to Escondido in July for one of these performances!