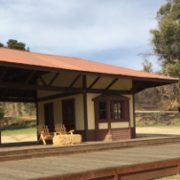 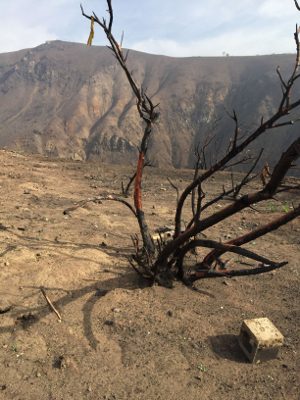 Along Kanan-Dume Road after Woolsey Fire

Just a few weeks ago, I wrote about the 2019 Topanga Banjo Fiddle Contest and Folk Festival (TBFC), one of the oldest continuously held traditional music and folk arts festival in the US. Starting in Topanga in 1961, it has been held at Paramount Ranch, a National Park Service site, for 25 years. Then the Woolsey fire hit the Santa Monic Mountains, burning 88% of the National Park Service land, including much of the Paramount Ranch. That event completely reset the festival planning.

Gary Floyd, the president of TBFC, told me that the goal remains to hold a festival on the regular date, which would be May 19, 2019. The board of directors is working with the National Park Service to explore possibilities on NPS land, including the Paramount Ranch and King Gillette Ranch (which was not affected), but they also consider possible venues elsewhere (the latter is less likely). Some less preferred options require major program pruning that leave just the core essential of the festival –  the contest and open jamming. My task of scheduling performances will not even start until a location and layout are final. 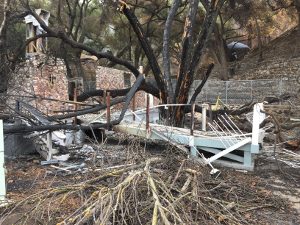 Last week, I went through the area affected by the fire. Going up from Malibu, the hills are charred and desolate, there is little vegetation left covering the ground and erosion from rain fall later this winter is likely to be heavy. Even after the rains, there is a strong smell of ash in the air. After major fires, the smell can linger for years.

But in this area, the fire damage was more sporadic than further south along Kanan-Dume road. Here, there are pockets with no visible damage, next to burned out areas. And in flat areas, green grass already sprouts after just a little bit of rain and gives a much more hopeful impression. At the Paramount Ranch, the two scenarios are next to each other. 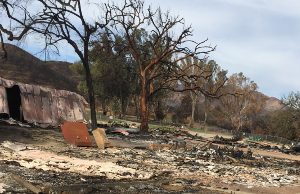 The Western Town, the central area of the Paramount Ranch, burned down completely and the lovely oak tree in the jamming corral is a black ghost.

But if you turn around, the meadow where the main stage usually goes is nice and green, even more attractive than it usually looks in May. There still is the smell of ash in the air, though. The Railroad Stage also survived even if the barn next to it is gone. 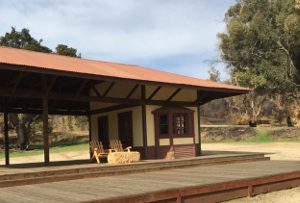 In the long-run, the festival is likely to return to the Paramount Ranch and Gary appreciates the continued support from the National Park Service as they undertake rebuilding a historic resource. But it is not something that happens quickly – even when there is no government shutdown. Fire debris and ash from damaged structures often contain hazardous substances like heavy metals and asbestos fibers. The removal of debris is prohibited until an inspection of the debris is conducted by EPA or state/local hazardous materials agencies. With more than 1600 structures that were destroyed in the Woolsey fire, the clean-up process will take a long time.

Relocating a large event like TBFC is challenging. More than 3,000 people are usually expected, but the bigger problem are cars. Locations that are big enough for people (and, unfortunately, their cars) and attractive (rather than just asphalt) are either very expensive or have no infrastructure. Bad decisions would quickly drain reserve funds and possibly even kill the event, so it takes some work to make sure that whatever form the festival takes for next year keeps the event alive. The website will be updated as things develop.