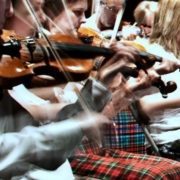 What is a Strathspey and Reel Society? 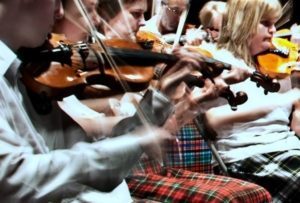 Traditional music sessions or jams are an essential part of Irish, old-time, or Bluegrass. In other styles, however, different formats of playing with others have been more important.

One different approach that has taken off in the last few years in the US, even expanded into other styles, originated in Scotland as Strathspey and Reel Societies. Strathspey and Reel Societies in many ways seem like community orchestras, except that they are dedicated to folk music, strathspeys and reels being two distinctive forms of Scottish traditional music. The reason that such groups started in Scotland rather than elsewhere may be that sessions have been less common in Scotland than in Ireland, making people look for other outlets. Scottish music has also always been somewhat more “literate” than other traditional music styles and the use of sheet music enables organizing bigger groups. Tunes that are now standards in the American fiddle tune repertoire, like Devil’s Dream, Soldier’s Joy, Hop High Ladies, originated in Scotland and can be found in Scottish tune collections from more than 200 years ago.

All of these groups are always welcoming to new members. For many players, especially those without a strong background in traditional music styles or people coming from classical music, this may be an easier entry into the music community,. especially since pub sessions can initially be very intimating to newcomers. The Scottish Fiddlers of Los Angeles can be contacted via their website or catch them at the Topanga Banjo Fiddle Contest and Folk Festival on May 15 at the Eucalyptus Grove or the Celtic Slow Session. Here is a clip of SFLA performing in Pasadena in April 2011:

Some classic Scottish session tunes and including sheet music for those tunes can be found in my column on Boston fiddler Hanneke Cassel.

What is a Strathspey and Reel Society?