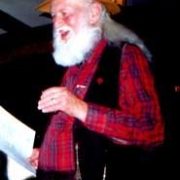 Some of his sayings were unforgettable: “The upper crust is a great big wad of dough held together by a few crumbs;” “If God had wanted us to vote he would have given us candidates;” “An anarchist is someone who doesn’t need a cop to tell him what to do.” His stories are legendary: The Great Turtle Drive of 1873 (the precursor of the cattle trade, when the turtles proved hard to herd); The Moscow Hold (a legendary wrestling maneuver that should not be tried at home-and now the title of an album of his stories, without the songs to get in the way); and Moose Turd Pie itself, about a camp cook on a railroad gang who takes advantage of the custom that if you criticize the food you volunteer to replace him.

But what made them unforgettable and legendary was Utah’s persona as a performer-he always told them in the first person, and made you believe that everything had happened to him postamble(); , even if (as in several admitted cases) he had first picked it up off a Myron Cohen record. Before Utah put it into his own show, however, he had refashioned a Borscht Belt yarn into a Wobbly tale, often attributed to one of his cheerfully acknowledged mentor-hoboes like “White Pine Shorty.” Were these “sources” real or made up, I often wondered, or a bit of both. It didn’t matter: They were real to Utah Phillips, and his boundless imagination made them real to you.

But at the heart of Phillips genius, as great as his stories were, are still his timeless songs, already a sturdy part of American folk music. Songs like Starlight On the Rails, Queen of the Rails, All Used Up, The Goodnight-Loving Trail, and The Telling Takes Me Home are as much a part of the American heritage now as Joe Hill’s and Woody Guthrie’s songs-anthems of the working class and spirited calls to arms of a dispossessed and disenfranchised people he called his own and for whom he became a voice.

But they also offer something you rarely find in his folk models-a lyrical gift for love that is personal as well as communal, for bonds forged between lovers as well as solidarity for the workers. This is nowhere more eloquently stated than in the song he called his “Hymn Song,” deliberately so since there is no hint of a world beyond in it, and yet it rings of a spiritual connection between two mortal persons bound together in this world: “I believe that if I lived my life again, I’d still be here with you.” Yet another side of his religious impulse, again without the institutional trappings of religion, may be found in his early paean to nature, If I Could Be the Rain.

But Utah was more than a songwriter and storyteller-he was in a sense that is increasingly hard to find, a true folk singer. Even if had not written his own songs he would have made a contribution carrying on the songs of his greatest mentors-the Wobblies whose work is preserved in The Little Red Songbook, written they said, “To Fan the Flames of Discontent.” Many modern folk singers have learned a few of Joe Hill’s songs-Utah Phillips knew them all, and the stories behind them, and those of many others whose names did not become famous in the wider world, such as Ralph Chaplin and T-Bone Slim.

When Utah Phillips told you about the Industrial Workers of the World, he did not speak of them as compelling historical figures or museum pieces-they were still a living, breathing, relevant part of today’s world who could inspire you as they had inspired him. Big Bill Haywood wasn’t dead and gone-he was looking over your shoulder and making you want to get up and do something to fight the bosses and the government shills who did their bidding. Utah managed to almost single-handedly revive a union that had seen its heyday more than ninety years ago and turn it into a contemporary role model for “The One Big Union” that Joe Hill and Big Bill had lived and died for. He summed up his attitude toward history with a resonant phrase from William Faulkner: The past didn’t go anywhere; it isn’t even past.

Thus, when he sang Solidarity Forever it was more than a folk song-it was your song and you believed in it-as the Polish Shipyard Workers did in Gdansk in the 1980’s, who used it to entitle their own noncommunist labor movement under the leadership of Lech Walesa. Utah was one of the significant people’s artists who had kept that song alive during what T.S. Eliot once called “a dry season,” so that it was still there when another labor movement came along that needed it.

And when he sang the song he often ended his shows with, not one of his own songs, but the “Haywire Mac” Maclintock classic Hallelujah, I’m a Bum, he ennobled the life of the American hobo, and celebrated the lowest of the low with whom he made common cause. For it was Utah who told us, “The hobo wanders and works; the tramp wanders and dreams; the bum just wanders and drinks.” But it was the bum he sang about, this reformed alcoholic who knew whereof he sang, and who had lifted himself up out of poverty and aimless wandering, with the help of another old anarchist and friend-Ammon Hennacy-who founded Joe Hill house in Salt Lake City, the refuge that took him in after Phillips came back from the Korean War broke and disillusioned and with nothing that seemed worth doing but taking to the highway. Meeting Ammon Hennacy changed that: He found a purpose in building a personal mythology out of the scraps of Wobbly lore, anarchist philosophy and his own family’s inheritance as labor organizers during the Great Depression. Utah was born right at the bottom of it, on May 15, 1935, so he carried Woody Guthrie’s legacy as comfortably as his own.

But true to his wayward self, for many years the only song of Woody’s I ever heard Utah sing was the one he playfully described as “not one of Woody’s best,” “Old Chycargo.” By the time Utah got through with it, though, it was transformed into a rollicking good song. He let others sing This Land Is Your Land.

And then came Iraq, and Utah went back to Woody’s vast song bag and discovered pure gold-an anti-Korean War song that Woody had pulled out of his wracked and tortured body in 1950, when he had already been hospitalized with Huntington’s Chorea and had started having to write songs with often just one word to a page. Even as he was descending into a seventeen year hell-on-earth, though, he could not stop creating, and he answered our call to arms with I’ve Got to Know. Utah Phillips reworked it a little and put out an anti-Iraq War album as powerful as any I have ever heard, with Woody’s as the title song:

Why do your warships

Sail on my waters

Why do your planes drop

Bombs from my sky

Why don’t you carry food for my children

I’ve got to know friend

Hungry lips ask me wherever I go

Comrades and friends all falling around me

Like so many of Woody’s songs it’s a reworking of a traditional song, “We’ll understand it all by and by.” But where the traditional song is a hymn of comfort at life’s inequities and calamities, Woody’s song is a powerful protest and a demand for some explanation from the perpetrators. Utah salvaged this song from an old dusty songbook and, as he had done with the Wobbly classics he restored to a new life, made this song a living part of today’s antiwar movement.

At the same time that he refashioned long forgotten lyrics, tunes and stories and made them his own, he never stopped writing his own modern folk stories set to music. One of these harkened back to the end of World War Two and tells the story of The Enola Gay, the American bomber named for pilot Colonel Paul Tibbet’s mother that dropped the first Atom Bomb on Hiroshima, August 6, 1945. Utah tells the story with a jaundiced eye at someone who would name such an instrument of destruction after his mother, but not as a newspaper editorial-he saves it as a work of art by simply telling the story from the point of view of someone on the ground looking up in the sky and wondering aloud what it was that was heading toward them. There is no song quite like it-Utah manages to put the listener in the very shoes of those whom the bomb is about to destroy. Like all great writers, he shows-he doesn’t tell. Indeed, that is the secret of his storytelling.

Goodnight, U. Utah Phillips, “The Golden Voice of the Great Southwest.” Thank you.