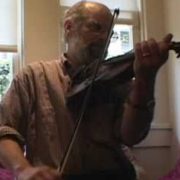 When you search the Web for Dan Gellert, it’s shocking how hidden he is. Especially the lack of video!! There’s a minimalist website, references to his brilliant CD Waitin’ on the Break of Day, and colorful descriptions of his style and genius. On some of the fiddle and banjo boards you’ll find quotes like “Dan Gellert is a whirling dervish of banjo funkiness,” “He has a very blues-based approach to old-time music, often favouring ‘blue’ notes and African-style syncopated rhythms,” and “A few words that come to mind when listening to Mr. Gellert are syncopation, riffs, loose (NOT sloppy), and finally: James Brown.”

One of my favorite descriptions of his playing is:

“It’s funky, it smells, stinks like a sweaty woman. That’s the highest compliment I can give.”

In 2005 a few friends flew him out here to Los Angeles for workshops and a house concert. I was able to video him for a few hours in an extremely casual setting and then during a workshop. After contacting Dan about releasing the videos online to spread the old-time wealth, I discovered them missing. Years later, I found them in a mysterious box. Don’t know how they got there, nor do I care. I’m finally presenting them for your enjoyment and fiddle edification. But first, a recent Q & A with the master himself.

DB: How did you learn? Did live one-on-one interaction play a part in the learning process?

DG: There were a few banjo (and mandolin and guitar) players around that I got to watch and sometimes play with. On the fiddle I think it was just me and the old records for maybe the first couple of years.

DB: Which fiddle and banjo players have influenced you the most?

DG: I can say that Pete Seeger was a major influence because he’s the first banjo player I heard and also his GREAT banjo book which I still recommend to students. For most, “why” is just because I like to listen to them. A random selection of my early models, in no particular order: Uncle Bunt, Uncle Dave, Hobart Smith, Wade Ward, Doc Watson, Tom Ashley, Posey Rorer, Luther Strong, Fred, Kyle, & Tommy, Gid, Lowe, & Pappy, Sam & Kirk, Dock Boggs…

DB: How did you approach bowing when you started learning? Was there any sense of “bow patterns” for you? How do you think about “bowing?”

DG: I didn’t think of it that way when I was learning, but I managed to acquire a few good habits very early on (just plain luck as far as I can tell). I’d been fiddling for maybe 20 years by the time I was hanging around with Brad and heard him talk about “down bowing”. I remember asking him if I played that way, since I’d never paid any attention to which way the bow was going. He said yes. Since then I’ve gotten more and more into teaching, and so I’ve had to learn how to analyze and dissect the way I do things. It still isn’t real easy.

DB: What are the most eccentric tunes/recordings in your mind?

DG: Strange that I felt an instant negative reaction to this question, as I used to think I was real into eccentricity. My first thought was f*** eccentric, music has to be CENTERED. Everyone has their own idea of where the center is, though. Which doesn’t answer the question. I don’t know. Like, Willie Narmour can be crooked as hell, but he very much makes his own kind of sense. What about Edn Hammons, JW Day, (and lots of others, of course)– eccentric, or just real normal for the mid 19th century?

DB: Do you listen to any modern musicians?

DG: Not a lot. I do sometimes hear things I like, but I’m getting old enough that long-term memory carries a lot more weight with me than short-term….