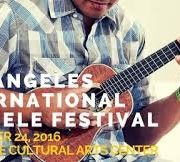 UKE EVENTS TO TOOT ABOUT 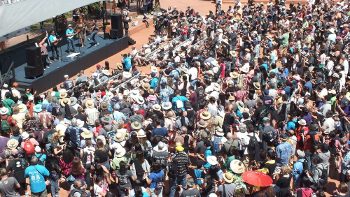 The Los Angeles Ukulele Expo always includes a mass-strum on the plaza of the Japanese Cultural and Community.

As August gives way to September, this ukulele lady looks back fondly at special uke experiences and forward with gusto to upcoming events featuring Mighty Uke. A highlight in June was the Ukulele Expo held at the Japanese American Cultural and Community Center in the heart of downtown L.A. It was largely organized by Jason Arimoto, musician, ukulele instructor and uke dealer at JACCC’s U-Space, along with musician-arranger-composer-producer and six-time Grammy winner Daniel Ho. Besides the now-traditional mass uke strumming session outside on the steaming plaza, the event offered some fascinating workshops.

A panel on the history of the ukulele presented perspectives from Jim Tranquada, co-author of the definitive history of the instrument (The Ukulele: A History by Jim Tranquada and John King, University of Hawai’i Press) and Jerome Koko, one of the original Makaha Sons, a group that emerged during the 1960s/70s Hawaiian cultural renaissance. They recounted the journey taken by the uke from its Portuguese origins on the island of Madeira to Hawai’i in the late nineteenth century sugar plantation era, to the mainland uke craze as the 20th century dawned, and back to Hawai’i in the 1960s/70s where innovative Peter Moon explored the uke’s Hawaiianness with a host of classic songs.

Another worthwhile workshop brought the ukulele into the Latino realm. Musician and ethnomusicologist Alexandro Rodriguez demonstrated parallels between our four-stringed wonder and the similarly shaped jarana which has long been associated with the Veracruz region of Mexico, home of the son jarocho (think La Bamba). Typically the jarana has five double courses of strings. However, the tuning and the individual strings of the two instruments are so similar that sometimes jarana players come to buy strings for their instruments from Jason Arimoto at U-Space. By the end of the workshop, some 30 attendees were enthusiastically strumming La Bamba in the Veracruz style.

Before the workshop was over, Jason Arimoto announced that on October 8 and 9 the JACCC would host what they call FandangObon. This is distinct from the traditional Japanese Obon season — in the latter part of August — honoring ancestors with candlelit lanterns and other customs at temples and community centers. FandangObon will include jarocho-style jamming on ukuleles and jaranas plus African drumming. Actually, the music is but one element of an encuentro of representatives from three Los Angeles communities. The purpose is to honor, in the words of Alison De La Cruz, JACCC Director of Performing Arts & Community Engagement, “the balance between mother earth and humanity by bringing together Japanese, Mexican, and African American communities into one circle through participatory music, dance, and gardening practices.” 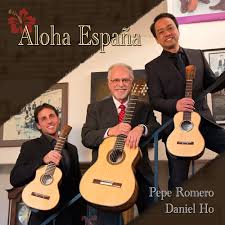 Hawaii-born Daniel Ho brought the voice of the ukulele into harmonious collaboration with the guitar artistry of Pepe Romero, Sr. on instruments crafted by Pepe Romero, Jr.

It sounds a bit like multiculturalism gone wild, but it doesn’t sound boring.

At the Uke Expo, too, I learned of Daniel Ho’s recording project with classical guitar icon Pepe Romero, Sr., titled Aloha España. The “aloha” represents our mighty uke, while “España” stands for the Spanish classical guitar repertoire. The enchanting CD, awaiting September release, offers several beloved pieces from such composers as Albéniz, Granados, and Sor, arranged as duets for guitar and ukulele: Each musician also gets a chance to play solo. The deft musical pairings by Daniel Ho demonstrate the compatibility of the two stringed instruments. A third piece of the collaboration involves the actual instruments which Ho and Romero Sr. played. Both were crafted by master luthier Pepe Romero, Jr. Furthermore, exciting news! These amazing musicians will play duets from Aloha España in concert at the JACCC’s Aratani Theater on Friday September 16 at 8:00 p.m. Also performing will be the Romero Guitar Quartet. Tickets can be purchased through web.ovationtix.com.

Before moving on to the upcoming ukulele festival, let me share more personal uke news. From June through August I was practicing like a marathon runner for the Kumakahi Ukulele and Hula Festival and Competition, held in Las Vegas August 12 and 13. One of the ensembles I play with, the Aloha Picking Ohana, competed and took first place with our renditions of three gorgeous Hawaiian songs — Hi’ilawe, Waipio Pa’ea’ea, and an artfully intertwined Malie’s Song and Hawaiian Lullaby. Our instructor and musical arranger, Mel Ogata, deserves the highest praise. (So does the inventor of the cannabis-based analgesic ointment I use on my carpal-tunnel-riddled wrists to help me through hours of practice and rehearsal. Yes, I have a prescription.)

The Los Angeles International Ukulele Festival will offer workshops at all levels plus stellar performances.

The Los Angeles International Ukulele Festival on Saturday, September 24, promises to be as user-friendly and fully-packed as last year’s day-long event at the Torrance Cultural Arts Center. Performers rank high in the ukulele pantheon – gifted Canadian uker/songwriter James Hill, jazz guitarist/uker Jeff Linsky, jazz stylist Abe Lagrimas, Jr., and Andrew Molina, who straddles pop, rock, and Hawaiian genres on the four strings. Add to the mix of performer-instructors the ever-engaging couple Craig Chee and Sarah Maisel plus uke community favorites Cali Rose, Jim D’Ville, Victoria Vox, and others. Workshop titles are enticing. Think Bossa Nova for Ukulele, Life After the Third Fret, Ukulele Big Band, Ukulele Boot Camp, to name a few. All in one day? There will be tough decisions to make. And by the way, bring a hat with a brim. As I recall, the seating near the outdoor stage took a lot of rays at last year’s Festival. The cost for the full day is just $45. For particulars, visit the festival website.

Audrey Coleman is a journalist and ethnomusicologist who explores traditional and world musics in Southern California and beyond.

UKE EVENTS TO TOOT ABOUT