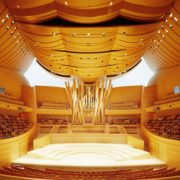 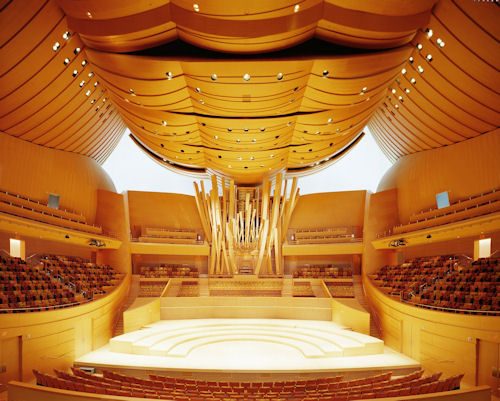 Whenever I listen to music in Disney Concert Hall, I have the feeling of sailing on an elegant three-tiered ship. On Saturday evening, April 16, from my orchestra seat, I looked up at the people seated behind the gently curving tan wood balcony barriers to my right and left, at the huge scalloped pieces of wood overhead, reminiscent of billowing sails, and at the deep aquamarine peeking out on the top right and left corners behind the stage. Soon the audience would be sailing in this magnificent vessel on a sea of sound. It was the right setting for a concert celebrating not only world music but also the UCLA Department of Ethnomusicology, which in 2010 reached its 50th year.

The globe-trotting program showcased the UCLA Philharmonia conducted by Neal Stulberg, playing with soloists on compositions by Ethnomusicology Department Professors James Newton and A.J. Racy and visiting Professor Arturo Marquez. Professor Racy also played both the nay (reed-flute) and the buzuq (long-necked lute) during the performance of his work, A Sea of Memories: Music from the Arab World. The Chinese Rhapsody by Ge Gan-ru took us to yet another continent. Huasteco and Espana, arranged by Manuel Cerda and Jesus Guzman and interpreted by Los Camperos de Nati Cano, combined the more familiar sounds of a mariachi ensemble with the considerable power of the Philharmonia. The evening was a worthy tribute to world music and ethnomusicology, defined by the Grove Dictionary of Music as “the study of social and cultural aspects of music and dance in local and global contexts.”

Compared to other disciplines, ethnomusicology is relatively young. The study of world music in the late 19th and early 20th centuries was influenced by European colonial attitudes and notions of cultural Darwinism. In the World Music 20B class I audited at UCLA a few years ago, Professor Racy referred to this approach as the Evolutionary School. There was an assumption that non-western musical systems needed to “advance” to the type of complexity displayed in Western music. In the early years of the 20th century through the mid-1950s, world music study then developed into the more scientifically-oriented comparative musicology. Scholars of what was known as the Berlin School placed emphasis on accurate systems of musical transcription and were able to record performances in the field as portable technology became available. Bela Bartok, Zoltan Kodaly, and more recently, Alan Lomax are considered examples of the comparative approach. They focused more on the music in and of itself than on the cultural context in which the music was produced and their benchmark remained Western music. Dutch musicologist Jaan Kunst (1891-1960), who studied Indonesian gamelan performance, coined the term “ethnomusicology,” borrowing from the Greek word meaning nation. With the influence of anthropologist Alan Merriam and his landmark book The Anthropology of Music, ethnography began to play a role in studies of non-Western musics. Ethnomusicologists were now asking questions such as: With what type of activity is the music associated? What is the culture’s attitude towards music and musicians? How is the music learned and transmitted? In the 1980s, eminent anthropologist and ethnomusicologist Bruno Nettl put forth the unsettling notion that ethnomusicologists are limited by their western perspective and cannot necessarily fully grasp the world view of their non- western subjects of study. This caution has influenced a new generation of ethnomusicologists to develop various frameworks for studying other cultures’ musics and to make their own cultures’ folkloric and popular music subjects of study.

Lest you think that ethnomusicologists inhabit a scholarly bubble, here is a sampling of activities I have learned about in recent years.

In 1959, Dr. Hood and Boris Kremenliev wrote a successful proposal for the establishment of the Institute of Ethnomusicology, marking the formal start of ethnomusicology study at UCLA in 1960. By 1964, the Institute contained an archive, several world music performance ensembles, a publications program, a large collection of instruments from non-Western cultures, and a laboratory for the scientific study of world music. World-renowned scholars and master musicians from different parts of the world joined the UCLA Music Department faculty. Among them was Dr. Charles Seeger, inventor of a musical notation system called the melograph. Incidentally, Dr. Seeger was the father of iconic folksinger Pete Seeger as well as folk revivalists Mike and Peggy Seeger. Professor Anthony Seeger of the current Ethnomusicology Department is a nephew of Pete, Mike, and Peggy Seeger, and former director of Smithsonian Folkways Recordings.

After the retirement of Mantle Hood in 1974, the study of world music at UCLA became known as the Program in Ethnomusicology, a status it maintained until 1989 when through the efforts of Professor Nazir Jairazbhoy, the program gained Department status.

The UCLA Department of Ethnomusicology in the Herb Alpert School of Music remains an internationally recognized center of scholarship on world music, currently accepting only about half a dozen students into its masters/doctoral program annually. An exhibition of historical photos and artefacts highlighting the people, events and ideas that have shaped the study of world music at UCLA and around the globe is on display until June 12 at Schoenberg Hall, open Monday through Friday, 8 a.m. – 5 p.m.

During May, the world music ensembles will be performing in the Schoenberg Music Building. All concerts are free (parking is not) and begin at 7:00pm.

African American Ensemble and Music of Mexico Ensemble – Friday, May 13

Near East Ensemble and Music of China Ensemble – Saturday, May 14

Music of the Balkans Ensemble and Bluegrass and Old-Time String Ensemble – Sunday, May 15

Music of India Ensemble and Music of Bali Ensemble – Saturday, May 21

Music of West Africa and Music of Brazil Ensemble – Sunday, May 22

In addition, on Saturday, May 7, the Hammer Museum will feature a free concert by the Music of China Ensemble at 2:00pm and the Bluegrass and Old-Time String Ensemble at 3:30pm. The Hammer is located in Westwood at 10899 Wilshire Blvd., Los Angeles, CA 90024.

Audrey Coleman is a journalist, educator and passionate explorer of traditional and world music.