Trade Your Headache for a Smile:

An Old-Time Music and Photography Set 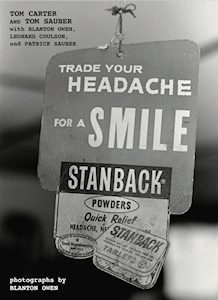 When Tom Sauber first taught me how to drag my bow across the strings of a fiddle in that special old-time way, I had no idea how those first strokes would impact my entire life. As I learned tunes and heard stories about Earl Collins, Dock Boggs, Bob Rodgers and the late Blanton Owen, I slowly began to realize that this music transcended the notes and bow rhythms that I was obsessed with. The music comes from people and places. Some are alive and some have passed on. Some areas rich in traditional music have faded away and others are now thriving. Twenty years after my first fiddle lesson with Tom Sauber, I find myself teaching the music I’ve learned and loved, as well as the stories that are inseparable from the tunes and source musicians. Ever since I started Tiki Parlour Recordings with my partner Rick Hocutt, I’ve been busy documenting old-time musicians from around the world and releasing recordings and videos of their art. In a way, I feel like so much of my musical life has culminated in this new recording.

For our 22nd release, I’m so excited to present a double CD and booklet set that features the fiddling of my mentor Tom Sauber along with his music-making friends of old. One of these musicians is Blanton Owen who many of you may know from those classic Tommy Jarrell videos and his work with the Fuzzy Mountain String Band. Blanton was also a phenomenal photographer and folklorist. The booklet presents his outstanding Appalachian photography. Disc 1 is the last recorded concert that Blanton played before he died from a tragic airplane crash. This set was conceived by another member of the famed Fuzzy Mountain String Band, Tom Carter. The two Toms have been musical buddies for a long time and they are experts at creating new settings for this music while remaining 100% old-time. They are also joined by Leonard Coulson (Deseret Stringband). Disc 2 is a new studio recording featuring both “Toms” along with Patrick Sauber (Laurie Lewis, Peter Rowan, Tim O’Brien, A Mighty Wind). It gives me chills knowing that I’ve helped make this release possible. Cheers!

Order at www.OldTimeTikiParlour.com (Ships in April 2021)

The music changed everything, from the friends we had, to the way we dressed, and even to our eventual career paths. For Tom Sauber, work was something you did so you could play old-time and bluegrass music as much as possible. Patrick Sauber grew up in the music and made it his life’s work. For the rest of us it remained a sideline, but embracing the music channeled us into lives we would never have had without it. Leonard Coulson abandoned classical Latin and Greek for banjo making. Blanton Owen turned to folklore studies and became a state folklorist, and I ended up at a university teach- ing classes on folk art and architecture. But through it all, the music was there. I first heard it in Utah, Leonard’s exposure came in Wisconsin, it was all around Blanton’s home in Tennessee, and it found Tom and Patrick in Southern California. Who would have thought that we’d all meet up and make music together? But it’s the usual story. We were players, we looked for folks to play with, and ended up in a band! Or bands, because the scene was pretty fluid, with people moving in and out of various groups. Friendships were and continue to be key, which is another thing about the music,
that it’s a social club, or community. When you meet up with someone who plays, you feel an immediate connection. So we are part of the music and it is part of us, and I must say that, as some of us get older, the current vitality of the old-time music scene is extremely gratifying. A “revival” of the “revival.” Who could ask for more in these strange Covid days.

—Tom Carter, excerpt from the Trade Your Headache for a Smile double CD set booklet. 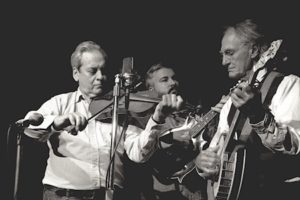 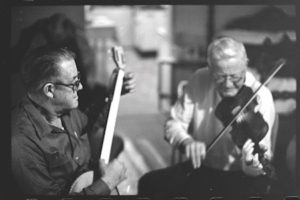 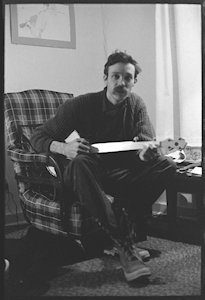