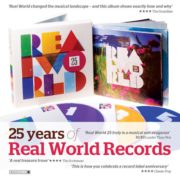 Year of the Alvins. No musical project in 2014 has brought me more joy than the reunion of Phil “the Voice” Alvin and Dave “Songster-Geetarman” Alvin. The brothers, known and beloved as the core of 1980s L.A. roots-rock faves the Blasters (and Dave for his stellar solo work), had not made an album together for many years. It took the combination of Phil’s near-death experience and a passion for the ouevre of Big Bill Broonzy to bring the Downey-bred duo’s special mojo back into our lives. Beginning with their April event at the Grammy Museum celebrating the release of Common Ground (YepRoc)–the bros’ singular tribute to Broonzy that I’ve had in high rotation–and continuing with a triumphantly soul-rockin’ June evening at the Troubadour, Phil’s wondrous howl and Dave’s six-string shred helped keep me sane this year. (The Alvins backed by the Guilty Ones return to the Troubadour, Saturday, January 31)

Atash, Everything Is Music (Ars Mundi) and live at the Mint, September 28. “We’ve fallen into a place where everything is music… there are hidden instruments playing everywhere. The world can go on without you and me. So let’s have a good time.” Yup, Atash main man Mohammad Firoozi certainly knows how to bring the passion and get the party started. The group’s latest album wonderfully captures its unique worldly blend of Middle Eastern, South Asian, reggae, jazz and other elements, but the live act sent the small but mighty Sunday night crowd at the Mint spinning with abandon into the ever-shifting sonic fray.

Rosanne Cash, The River & the Thread (Blue Note) and live at Troubadour, January 8. The first show of the New Year ended up being one of the best. Rosanne “daughter of Johnny” Cash, accompanied by her hubbie and guit-whiz John Leventhal, played much of her brilliant deep South roadtrip-inspired The River & the Thread, as well as older material of her own and jewels from the great American songbook. Too folk for country, too country for the blues, too bluesy for folk, the album haunts, flows and uplifts, a new classic in the roots music corpus.

Conjunto Chappottin y sus Estrellas, live at Skirball Cultural Center, July 31. In a smart move to honor the clavé, the Skirballians literally laid down a proper dancefloor for this son extravaganza. And they achieved the desired result, as the collective hip-shakin’ and hoof-struttin’ induced by the Cuban dance-music giants put many of us in a good mood for days.

Toumani and Sidiki Diabaté, Toumani & Sidiki (World Circuit). Although the father-son kora duo had to cancel a late September gig at UCLA Royce Hall, their album cast its spell throughout the year. Few instruments balance beauty and funky pluck as profoundly as the West African harp-lute in the hands of a master, and when two virtuosos combine forces as the Diabatés do on this album, the results exceed even this reporter’s admittedly high expectations.

fRoots magazine. On the eve of its 36th anniversary year, fRoots continues its run as arguably the best English-language folk, roots and world music magazine—and taste-making purveyor of free compilation albums. Kudos to editor and chief bottlewasher Ian Anderson and his UK-based team for keeping the flame burning. My only beef: many of the artists covered in the publication rarely if ever make it to our corner of the planet! #musicalenvy

Robert Plant, Lullaby and… the Ceaseless Roar (Nonesuch). I challenge readers to find me many other rock dinos who have continued to harvest delicious new musical fruit as prolifically as Robert Plant. From his work with Alison Krauss and then the Band of Joy to his latest mystical opus forged with his aptly named roots-world-etc. collaborators the Sensational Space Shifters, the former Led Zeppelin rock god has proven that one doesn’t have to remain anchored artistically to past glories.

Naomi Randall with Tom Gaskell, self-titled (Aaah Real Records). Thanks to the aforementioned Mr. Anderson et al. for turning me onto this beguiling slab of trad-original Brit psych-folk via the track “Nottamun Town” found on the fRoots 49 sampler included in the June edition. I can almost smell the patchouli.

Various Artists, RealWorld 25 (Real World). Few labels have exposed open-eared mélomanes to more global grooves than RealWorld Records. Although Peter Gabriel gets much of the credit, the scores of releases issued by the UK-based company resulted from team efforts, both in the studio and the marketplace. Honoring RealWorld’s silver anniversary, this beautifully packaged three-CD boxset culls 48 tracks from the back catalog, reminding me of treasures in need of revisiting, revealing overlooked nuggets, and, yes, including valiant yet failed attempts at cross-cultural fusion. Listening to the collection as a whole, the soulful ductility of the human voice and well-proportioned polyrhythms are recurring themes.

Tom Cheyney has been writing about the global and roots music scenes in Los Angeles and around the world since fax machines were high tech.