The COVID-19 pandemic had an adverse impact upon retail sales in many areas – but this past January  Rolling Stone magazine surprised us with this headline “Did Everyone Buy a Guitar in Quarantine or What?.”  Not only are guitar sales up generally, but there has also been a significant increase in sales of guitars, as well as lessons, to beginners of all ages. 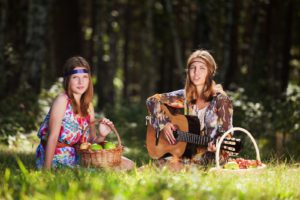 In my group of high school friends, having a guitar was as essential as having a toothbrush. We sat in a circle around many campfires and in each other’s homes to learn the latest songs from our much beloved folk artists.  For some, the acoustic guitar was eventually replaced by the electric version and rock became the popular music of the time.  Still, I remained a “folkie” at heart and remember those days fondly, even though my acoustic guitar has retreated to its case for many years. 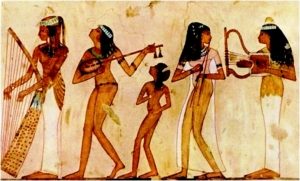 So where did this ubiquitous musical instrument come from? Stringed instruments arose in many civilizations. For example, Egyptian tomb paintings show these as early as 1400 BCE. Interestingly, most such paintings show female musicians.  Even before that, the Oud (described by historians as type of lute) was being played in Mesopotamia (Iraq) in 2350 BCE.  The name “lute” is derived from the Arabic “al-Oud” and the instrument found its way to Western Europe in the 16th Century. . 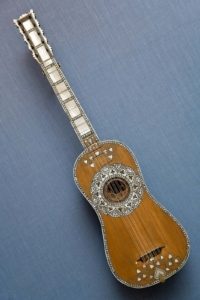 From these origins, the Spanish created the ancestor of the modern guitar; the “Guitarra Latina,” originally with three double strings and one single.  It evolved through the 16th to 19th centuries having up to six double strings.  Sometime before 1800 it became a six string instrument with the same standard tuning as used today.

The modern Spanish guitar quickly became known as a classical instrument, gaining a great deal of popularity due to the work of classical guitar virtuoso Andrés Segovia. Here is an excerpt from his last concert at the White House in 1979 at the age of 86.

A complete 1967 documentary “In the House of Andres Segovia” is also available on YouTube.

Although the guitar is often used an instrument to accompany a vocalist, the classical guitar is alive and well and you will find much to demonstrate this on YouTube. One brilliant musician in this genre is João Luiz. Originally from Brazil, Luiz not only performs but is also the director of chamber music and head of guitar studies at CUNY Hunter College and also teaches at Stony Brook University. Here just one example of his remarkable skill on the guitar:

Another brilliant classical guitarist is 23 year old Alexandra Whittingham, seen here performing at the Church of Saint-Sauveur, Puy-l’Évêque, in France:

Based in London, she has a strong following on You Tube and this past February recorded a Q&A session responding to questions asked by her fans. I personally enjoyed listening to this as it was nice to get a glimpse of the personal side of this very accomplished artist: Whittingham Q&A

The acoustic guitar remains a versatile and popular instrument whether in the hands of a vocalist, an accompanist, or a virtuoso classical performer.  Want to learn to play? It’s never too late because another thing that the pandemic has given us is the proliferation of online guitar lessons.  Mama Cass Elliot sang: Make your Own Kind of Music – and I’ll leave you with a unique cover (and illustrative video) of that memorable song, performed by Charlotte Campbell: