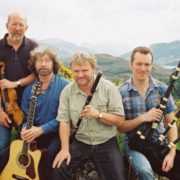 The Tannies Head To Ventura 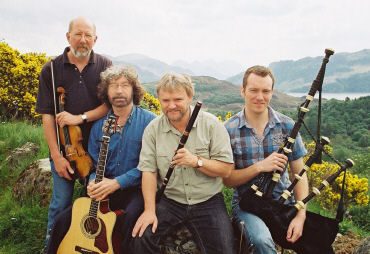 Save the date! It seems like I’m always writing in this column about great Scottish live gigs that I wish you could hear. Well, for once I can tell you in advance about something well worth hearing that’s coming soon to southern California.

Every October, fans and aficionados of Scottish culture gather in Ventura for a two day festival of Highland games, piping, dancing and music. It’s called the Seaside Highland Games

Normally the festival features entertainment by American bands and performers; most of them local to Southern California. But this year one of Scotland’s finest trad/folk bands will be playing.

The Tannahill Weavers have been together as a band since 1968, and released their first album in 1976. Over the years the makeup of the band has changed, and has included familiar names like Dougie MacLean, who went on to become one of Scotland’s top solo artists.

Today, the “Tannies” lineup includes two of the original founding members, Roy Gullane (guitar and vocals) and Phil Smillie (flute, whistles, Bodhran and vocals). Fiddler John Martin has been a member for so long, it’s hard to remember that he wasn’t an original.

Back in the early days, Roy and Phil decided it might be interesting to add the sound of bagpipes to the mix. No band had ever successfully done this before, mostly because the pipes are tuned to a different pitch than the other instruments and at that time the technology we use to overcome this today didn’t exist. But they found a way and became the first Scottish band to successfully record and tour with the pipes. Over the years, some of Scotland’s best pipers have been in the Tannies’ lineup, including the late Gordon Duncan and the current pipe major of the Strathclyde Police pipe band, Duncan Nicholson. The present piper is Lorne MacDougal, who has many claims to fame including piping in the movies Brave and How to Train Your Dragon 2.

Along with the pipes, the Tannies have long been recognized for their signature blend of vocal harmonies. Their sound is a combination of individual voices with the rare capacity to blend into the sound of one. Southern Californians may know what I mean if I mention locals like The Browne Sisters or Voco.

The Tannahill Weavers will be featured performers at the Seaside Highland Games in Ventura which are scheduled to be held on October 10 and 11. The games are a great experience anyway, but with the chance to hear these masters of the Scottish tradition; this should be the year when you decide to give this festival a try. Also performing at the games are: Celtic Spring, The Angry Brians, Golden Bough, and Highland Way. For details, visit their website.

He wasn’t a folk singer, but…. He was as much an icon of the sixties’ peace and equality movements as were singer-songwriters like Phil Ochs and Pete Seeger. Younger people than I will know him as the head of the NAACP, but if you go back a couple of decades Julian Bond was one of the bright, shining lights of the future so many of us envisioned.

He was elected to the Georgia House of Representatives in 1965, but the members voted not to seat him because he had publicly stated his opposition to the Vietnam War. After a series of court battles he was finally seated and went on to serve four terms.

In 1968, Bond attended the ill-fated Democratic National Convention in Chicago as an alternate delegate from Georgia. During the chaos, his name was put forward as a presidential candidate, but he was forced to decline because he was too young.

I had the privilege of standing near him in a small group of people who were part of the Civil Rights movement back in 1968. To close the meeting, someone suggested that we sing We Shall Overcome. I may have heard better musical performances of that song, but I’ve never again experienced anything quite like the hope and determination that filled the room. Rest in Peace, Julian Bond, and thank you.

“I knew nothing of the real life of a musician, but I seemed to see myself standing in front of great crowds of people, playing my accordion.” — Lawrence Welk

Vernon Duke (1903-1969), US composer, born Vladimir Dukelsky in Russia; among his famous songs is April in Paris. Inspired by Duke’s famous song, a friend of his decided to spend three weeks in Paris one April. The weather was appalling, and when he returned he told Duke so. “Whatever possessed you to go to Paris in April” asked the composer. “The weather in Paris is always horrible in April.” The astonished friend said, “But, I went there because of your song!” “Oh,” said the composer apologetically. We really meant May, but the rhythm required two syllables.

Lionel Richie will be honored as the 2016 MusiCares Person of the Year on Feb. 13, 2016, two days prior to the annual Grammy Awards ceremony, in recognition of his significant contributions to charity over many years. Proceeds from the dinner and concert will provide essential support for MusiCares, which ensures music people have a place to turn in times of financial, medical and personal need.

During his career, Lionel has been a strong supporter of cancer charities and children’s charities, and has been one of the most willing pop music stars to play fundraising gigs for free. He also co-wrote We Are the World, which was the first, groundbreaking superstar recording for charity. MusiCares is a real safety net for musicians who aren’t lucky enough to be making millions, and if you’re looking for a charity that deserves your support it’s one for you to learn more about.

“Use the talents you possess, for the woods would be very silent if no birds sang except the best.” –Henry Van Dyke

An American now living in , Linda Dewar is a singer-songwriter and a player of various stringed and wind instruments. Besides being a solo performer, she is half of a duo with Scottish singer Douglas Craik, plays in an occasional ceilidh band, and is a founding member of the revue Simply Burns. Visit her website.

THE TANNIES HEAD TO VENTURA