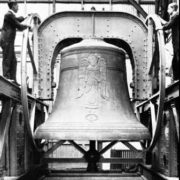 Who hasn’t marveled at the majestic and haunting sound of church bells? What is it about the sound of bells that is so moving and mystical? Bells have an almost magical sound that is truly unique in the family of musical instruments. Are bells really different from other instruments discussed in previous articles? Well, simply stated, yes they are. The “why” part of the discussion, however, is complex because a

good deal of theexplanation still remains as theory and sometimes not very conclusive theory at that. So, while this article may not have all the answers, let me share with you what I have discovered about bells.

Many years ago when I was young I observed that bells sound sad, and wondered why. One explanation is that unlike other musical instruments, the fundamental frequency is not the dominating sound in the bell’s harmonic series. Instead, the fundamental fades rapidly and what remains as prominent is a minor third sound. As noted in a previous FolkWorks article on the subject, minor chords are usually perceived as emoting sadness. As satisfying as that information is, it also suggests that bells really are a different beast and may be hiding even more tantalizing musical secrets!

I Should Have Node Better

Remember from our past discussions that what we consider to be a musical pitch is the result of resonance forming a standing wave. Bells, unlike pipes and strings, do not have specific endpoints to confine a standing wave. Instead, bells vibrate in three dimensions producing both horizontal and vertical nodal patterns yielding various pitch-related modes of vibration. Furthermore, since the vibrations travel around and around the bell, energy can leak from one mode of vibration into others setting up different nodal patterns with different related pitches.

The sound produced by ringing a bell changes with time and can be broken down into three main time periods. 1. The Strike: a non-harmonic hodge-podge that dies away quickly. 2. The Strike Note: the perceived pitch is not necessarily that of the lowest partial. 3. The Decay: the selection and strengths of the surviving harmonics that give each bell a rich, complex and somewhat confusing sound. Unlike most other musical instruments the frequencies of vibration are not necessarily related in simple ratios and the sound is not sustained in the same way as some of the partials decay very rapidly.

The brain has to do a lot of extra work to decide what information to extract from this potpourri of sounds. Some people may perceive this richness of unusual overtones as noise but most find this unconscious sorting exercise to be most engaging. Many Eastern schools of thought use bells for meditation, perhaps because their sound engages more and deeper parts of the mind. This brings us to the next consideration.

The Paradox of Perceived Pitch or The Missing Fundamental:

While a technician cannot determine a specific fundamental pitch for a bell just from taking measurements, the listener’s auditory system is somehow able to isolate a single specific pitch for that same bell. The fundamental frequency may not even exist but is inferred from the other harmonics produced by the bell. To understand how this works I refer back to a previous discussion of the harmonic overtones produced by string and wind instruments (see page 4 of the Jan-Feb 2005 issue of FolkWorks v05n01 in the Archives at www.folkworks.org). A note from any of those instruments always has a fundamental frequency (what we perceive as the pitch) and all the harmonic overtones build on the fundamental. The overtone structure has a specific ratio pattern of 1:2:3:4, etc. So a fundamental of 50Hz would have the harmonics of 50Hz, 100Hz, 150Hz, & 200Hz. A bell on the other hand may not even sound the fundamental but the harmonics present, e.g. 100Hz, 150Hz & 200Hz, represent a ratio pattern of 2:3:4 which strongly implies the missing 1: or 50Hz and the brain fills it in for us. Consequentially we hear the pitch of the bell as if it were an octave lower than the lowest harmonic actually produced.

Most bells are made as metal castings in a foundry. The size, shape and weight of a bell are the most important factors in determining the sound it makes. Once made, bells need to be fine-tuned. In the past this was done by chipping away bits from the inside using a hammer and chisel — a dangerous task that ruined many bells just as they were almost finished. Today bells are tuned using machines that work like a lathe to shape the inside. Removing material actually causes the nodes to be displaced thus affecting the pitch. Since the fundamental doesn’t actually exist, determining which harmonic partials need to be “tuned” is not a clear choice. In the past, bell makers picked one of the lower partials and tuned that one. More modern tuning attempts to bring the existing partials close to the 2:3:4:5 relationship to correctly infer the missing fundamental. 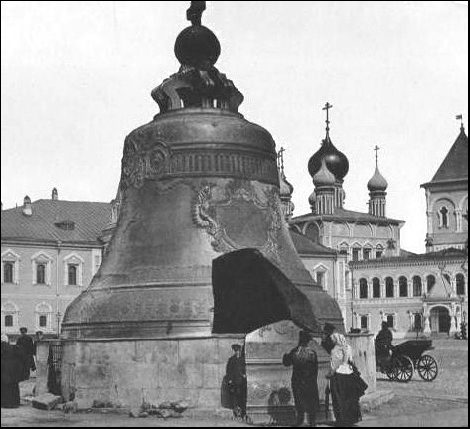 The ear does not respond equally to sounds of different frequencies. The physical structure of the ear favors and accentuates sounds in the 500Hz-1500Hz-frequency range. Large bells produce lower frequencies, and the ear has trouble perceiving the lower partials. This makes the upper partials more important in determining the missing fundamental. For medium sized bells the lower partial are very important because the upper partials are now beyond the ear’s favored frequency range. For small bells the first partial may be all that is within the ear’s favored zone.

Speaking of size, here are a couple of record breakers.

The Tsar Kolokol Bell (Figure 1) at 195 tons is the largest bell in the world. It was cast in Moscow in 1735. Unfortunately it suffered fire damaged in 1737 before it could be hung. Since then it has stood on a platform in the Kremlin. The fragment that broke away weighs about 11 tons!

The heaviest harmonically tuned bell in the world is the Bourdon Bell (Figure 2) of the Laura Spelman Rockefeller Memorial Carillon, in the Riverside Church, New York City. Weighing 18 tons, this bell was cast in 1928 by Gillett and Johnston of Croydon. 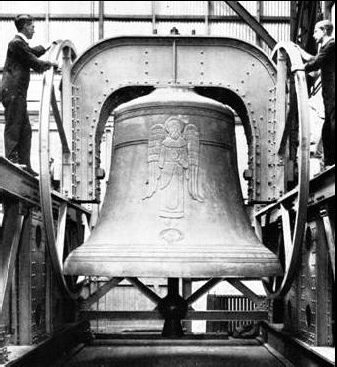 There is much more to know about bells and I will try to discuss more in a future installment. Until then, feel free to ring in and, as always, stay tuned.

After Quasimodo’s death, the bishop of the Cathedral of Notre Dame sent word through the streets of Paris that a new bell ringer was needed. The bishop decided that he would conduct the interviews personally and went up into the belfry to begin the screening process.

After observing several applicants demonstrate their skills, he had decided to call it a day – when an armless man approached him and announced that he was there to apply for the bell ringer’s job.

The bishop was incredulous. “You have no arms!”

"No matter," said the man, “Observe!” And he began striking the bells with his face, producing a beautiful melody on the carillon. The bishop listened in astonishment, convinced he had finally found a suitable replacement for Quasimodo.

But suddenly, rushing forward to strike a bell, the armless man tripped and plunged headlong out of the belfry window to his death in the street below. The stunned bishop rushed to his side. When he reached the street, a crowd had gathered around thef fallen figure, drawn by the beautiful music they had heard only moments before.

As they silently parted to let the bishop through, one of them asked, “Bishop, who was this man?”

“I don’t know his name,” the bishop sadly replied, “but his face rings a bell.”

The following day, despite the sadness that weighed heavily on his heart due to the unfortunate death of the armless campanologist, the bishop continued his interviews for the bell ringer of Notre Dame. The first man to approach him said, “Your Excellency, I am the brother of the poor armless wretch that fell to his death from this very belfry yesterday. I pray that you honor his life by allowing me to replace him in this duty.”

The bishop agreed to give the man an audition, and, as the armless man’s brother stooped to pick up a mallet to strike the first bell, he groaned, clutched at his chest and died on the spot. Two monks, hearing the bishop’s cries of grief at this second tragedy, rushed up the stairs to his side.

“What has happened? Who is this man?” the first monk asked breathlessly.

“I don’t know his name," sighed the distraught bishop, "but he’s a dead ringer for his brother.”

The Sound of Bells