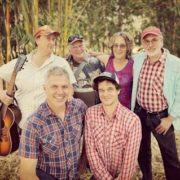 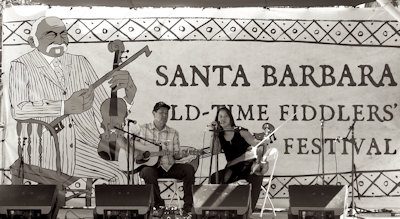 We just had the 48th Annual Santa Barbara Old-Time Fiddlers’ Festival hosted by the Goleta Valley Historical Society. It was originally founded by Peter Feldmann. This is my fourth year as the artistic director and this particular year was incredibly unique for a variety of reasons. We had many more workshops, performers, contestants and pre-festival campers than in previous years. We also had an incredibly diverse array of artists: Indigenous fiddle and guitar of Jim and Jamie Fox from the Ft. Belknap Reservation in Montana, master old-time Italian fiddler Rafe Stefanini, the mesmerizing old-time Georgia duo Hog-eyed Man, banjo and field recorder legend Art Rosenbaum also from Georgia, Oregon’s wonderful string duo The Horsenecks featuring Oregon’s Gabrielle Macrae and UK banjo wiz Barry Southern, bluesy/ragtime/jugband supergroup Todalo Shakers from the Bay Area and Washington, the SLO County Stumblers from Central California/Tennessee, the Bay Area’s raggy string band Skillet Licorice and even a fun set from my double fiddle duo with Susan Platz.

One of the most momentous events in my life as an old-time musician also occurred at this year’s festival. Descendants of the once-enslaved fiddler Alonzo Janes attended and helped support this year’s event. I was able to meet the “flesh and blood” of a fiddler whose tunes I’ve played since the beginning of my fiddling life. We presented a stage dedication to Alonzo Janes and celebrated with a beautiful backdrop that Howard Rains illustrated. Alonzo’s great grandson Dr. Gerald Jaynes gave a moving speech during the dedication. You can see it here:

You can also read more about Alonzo in the following blurb from this year’s program that Janes descendant Oliver Ben Karp and I crafted: 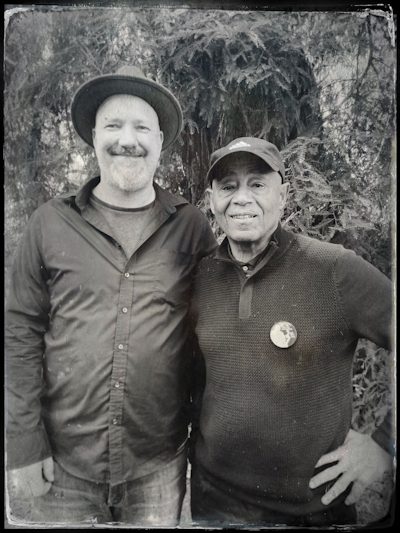 “William Alonzo Janes (1850-1937), known in his family as “Uncle Jimmy,” was born in Paris, Tennessee. His father’s name was Peter, though sadly his mother’s name is lost to history. They lived in a small brick farmhouse that his parents helped build, along with the extended families of the farm, both black and white. Family myth holds that Alonzo often travelled alongside his enslaver, sometimes on riverboats down the Mississippi. In New Orleans, where he was sometimes left alone, he considered running away, but was told by an elder not to worry, that soon they would all be free. He had thought it was a psychic prediction, but more likely, his advisor was simply reading the newspaper and knew of the coming war that would indeed liberate his people from bondage. After slavery, he moved with his wife, Mary Magdalene Wright, and their children to Moscow, Kentucky, and finally to southern Illinois. They initially resided in the small town of Onarga and then the slightly larger Pontiac. There he met the musical Durham family while working as a cooper. During this period he shared his fiddle tunes with the Durhams. Two of these tunes, “Over the Mountain” and “Alonzo Janes,” were passed down to fiddler Mel Durham (1914-2008) who relocated to Southern California just after World War II.”

“Mel shared Alonzo’s tunes with several generations of fiddlers in California. When I first learned these tunes from Mel, I became obsessed with playing them and learning more about their origin. I even recorded both of them on my CD “Big Fancy.” For the last 15 years I’ve been teaching Alonzo’s tunes to my students and at festival workshops, but with little historical information about their source.”

“However, a few years ago with the help of fiddler/genealogist Cynthia Richardson, I was miraculously connected with Alonzo Janes’ descendants. The family was able to hear their patriarch’s music for the very first time – they also provided photographs! It is with great pleasure that we are honoring fiddler Alonzo Janes as well as the folk process through which his tunes came to us (Janes to Durham to Bragger) by renaming the Santa Barbara Old-Time Fiddlers’ Festival main stage: The Alonzo Janes Performance Stage.”

Have a gander at the 48th Annual Fiddlers’ Festival Photo Album for a tiny glimpse into what occurred over that weekend. Each year at the Old-Time Tiki Parlour, I film musicians who travel out for the festival. It’s part of a comprehensive folk music project that I’ve been working on for the last five years. In fact, it’s my life’s work. This year I had the opportunity to film and record Hog-eyed Man, Rafe Stefanini, The Horsenecks and Art Rosenbaum. We even had the time to film an extra piece by each artist so I can share their wonderful music with you and so they can have a Tiki Parlour-produced video to share with their community. I’ve included a couple in the column and check HERE for more free videos and updates. 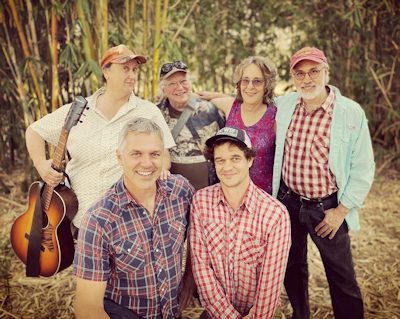 The word “community” is an integral part of our lives as old-time musicians. I’d like to point out that this festival and others like it cannot happen without a community of like-minded traditional music lovers. One of the greatest, self-less organizations that I know of is the Goleta Valley Historical Society (GVHS). They began hosting the festival five years ago out of their dedication and love for this beloved event. Behind the scenes, I have the pleasure of working side-by-side with the GVHS director Amanda DeLucia. A real honor. Amanda, along with Hattie Husbands, Viena Zeitler and their many volunteers, make this event possible. Also, our contest MC Mary Katherine Aldin embodies the spark of the actual contest. Without her…well, I don’t even want to imagine that possibility. Mary Katherine’s dedication and expertise is one of the driving forces of this wonderful contest. We would panic without her! And speaking of expertise: Without the judges there would be no contest. Due to a need for anonymity, you know who you are and I thank you immensely! These judges have the ultimate “thankless” job. Long live the judges!

This year we were also blessed with donations by master banjo-maker Kevin Enoch, artist Howard Rains, artist Angelina Elise, Spring Fed Records, musician and spoon-crafter Joe Wack, banjo-maker Eric Prust and FolkWorks for their donations to our contest raffle. They made it possible for us to fund our contest.

Over the last several years I’ve been working feverishly to get old-time musicians to visit California for chances to perform and teach in our communities. To make this happen, I’ve connected with several individuals who operate venues and host concerts/workshops throughout Central and Southern California. They’re not in it for money, glory, ego, etc. They do this out of love for the music and the musicians who make it. Together we are creating a wonderful network for traveling musicians.

For this year’s festival I was fortunate to receive a ton of assistance from old-time music superheroes Barbara and Andy Cameron and Amber and Jim Mueller that helped make the festival possible. These like-minded individuals share the same philosophy: To create welcoming spaces for musicians and music-lovers to celebrate the sounds, stories and histories of traditional American music. Clinton Davis from the Southern Pacific Sessions in San Diego, Roz Phillips from the SLO House Concert series, Connie and Doug Moxness from the Parkfield Bluegrass Festival, Kelly Marie Martin from the Los Angeles Old-Time Social and Down At The Yard, Steve and Leda Shapiro of FolkWorks, Jerry James from the POZO Old-Time Music Gathering, Lori Nafshun from the Topanga Banjo Fiddle Contest, Rick Hocutt from the Tiki Parlour AND countless other friends and students contributed their passion, music and donations to help sustain our common vision and give traditional musicians the chance to bring music to the people.

When we all work together, real music happens.