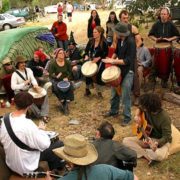 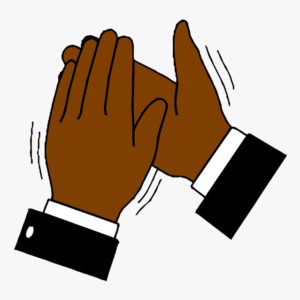 Guess what fellow folkies: we’ve got the beat as well!

I particularly like this definition from Encyclopedia Britannica: “Rhythm is music’s pattern in time. Whatever other elements a given piece of music may have (e.g., patterns in pitch or timbre), rhythm is the one indispensable element of all music. Rhythm can exist without melody, as in the drumbeats of so-called primitive music, but melody cannot exist without rhythm”. You can dive deeper into this concept at https://www.britannica.com/art/rhythm-music

Not all rhythm requires percussion. Take, for example, the Indigo Girls. Amy Ray and Emily Saliers can drive the rhythm of their melodies with just their two guitars.  As you listen to them it is clear where the downbeat is, and it is easy to follow along with the rhythm they set.  In this video it is clear that they are the primary drivers of the rhythm and even when a little bit of percussion is added, they still are:

Of course, folk music can also include percussion as well; one quintessentially American percussion instrument is the washboard. Rather me trying to write about the washboard’s journey from scrubbing clothes to stage performances, this video will take you to Logan, Ohio where you will find the last operating washboard factory in the US as well as the annual washboard festival held each June:

You may also have seen a folk musician, usually accompanying a group, sitting on what looks like a box and hitting various parts of the box to make different percussive sounds. More than likely, the instrument is a cajon (cah-HONE), This instrument, named for the Spanish word for “box,” got its start in Peru where it was developed by African slaves who were forbidden to play their traditional drums. It is therefore referred to as having an Afro-Peruvian origin. The cajon can now be seen around the world as it is not only useful but also quite portable. Its subtle tone is a great fit to accompany acoustic music. To see all of its percussive attributes, take a look at video by solo cajon virtuoso Daddi Bahmani:

Bahami was born in Iran and is presently based in Germany. He performs around the world and teaches over the Internet. He is active on Facebook and Instagram mor information may also be found on his website.

Another popular percussion instrument that has found its way to folk music is the bongo drum. This drum is of Afro-Cuban origin and was first documented in eastern Cuba in the late 19th century. The term “bongo” is thought to have been derived from the African Bantu word for “drum”. Bongos are played in pairs, one slightly larger than the other, which results in each having a different tone; usually each can be tuned as well. Not surprisingly, Cuban percussionists who emigrated to the US also brought the bongo drum with them and the instrument quickly found favor with what became known as “the beat generation” with the bongo sometimes used as an accompaniment to poetry reading; from there, others found ways to use these versatile (and very portable) drum sets.

Still, the bongo is very much in use in Cuba. Here is a Cuban song that you may have heard before here in the US:

May you keep the rhythm going in your own musical pursuits whether as a member of the band or in the audience!

The Rhythm of Folk