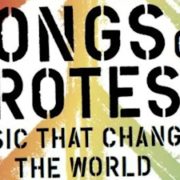 The Protest Song is Alive and Well 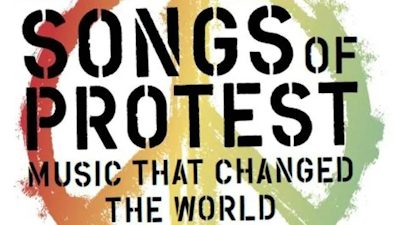 The protest song has never really died, and the times in which we live have given musicians more inspiration than ever.  Music speaks to us, the listener, in a way that the written word alone cannot.  So, this month, I give you three such artists whose commentary on current events presents both the beauty of song and the pain of tragedy and oppression that persist in our world.

Originally from the Bronx, New York, Gregg Robins began his musical journey playing classical clarinet, moving from there to the alto sax and expanding his repertoire to include jazz and klezmer. He has lived and worked in many countries, currently residing in Geneva, Switzerland.  His official bio gives brief mention of his PhD from Oxford University, but it also tells the reader that “I define myself more in terms of my passions and values than in terms of my resumé.”

Profoundly distressed by the mass shootings in Aurora, Colorado and Sandy Hook Elementary School in Newtown, Connecticut, Robins began to write his song Not Again when the first of these tragedies occurred and completed it after the second one:

Sadly, since this song was written and recorded, there have been many more, including Charleston (Emanuel AME Church), San Bernardino, Orlando (Pulse Nightclub), Las Vegas, Sutherland Springs (Church),  Parkland (Stoneman Douglas High School), Pittsburgh (Tree of Life Synagogue), Thousand Oaks (Borderline) and so many more. The entire tragic list is catalogued on Wikipedia.

More about Gregg Robins and his music may be found on his website.

Turning now to a Southern California local artist with multiple talents including songwriter, producer and studio owner, Lindsay Tomasic loves to perform; she released her ninth album Songs from the 6th floor earlier this year. At her CD release concert, she gave a live performance of a standout protest song from that album called A Dreamer’s Lament:

Lindsay has been a creator and distributor of music for television and film since the 1990s and has also recently developed a podcast along with author, educator and music journalist Dan Kimpel. The two regularly interview noteworthy individuals involved in the business of music, some behind the microphone and others behind the scenes. More about their podcast, Storyophonic, can be found here [3]; more about Lindsay Tomasic and her music can be found here.

A 2016 Harvard graduate, Joshuah Campbell was featured in the Harvard Gazette’s series featuring some of the “stellar graduates” of that year. Although majoring in music, as well as French, Campbell originally saw himself as someone who would ultimately find his career in academia even though he always enjoyed singing and acting. That focus changed, however, during his years at Harvard and the multiple opportunities he had to perform while still a student.

Two years after graduation, he returned to perform his original composition Sing Out, March On a cappella, accompanied by a chorus of Harvard friends. The performance was presented to honor civil rights leader and Member of the House of Representatives, John Lewis, the 2018 Commencement speaker:

Although Sing Out, March On has been performed by others as well, including a 2018 performance by 600 diverse individuals on the roof of the National Veterans Memorial and Museum, [6] Joshuah Campbell has not released any additional recordings and he is reportedly continuing his education at Union Theological Seminary in New York. I am sure that in time we will hear much more from him. In the meantime, he has a downloadable MP3 with all proceeds benefitting the Southern Poverty Law Center.

As in the sixties, the protest song gives many of us, including me, hope for the future.  In the meantime, these songs and many more are here to give us some respite through these difficult times.

THE PROTEST SONG IS ALIVE AND WELL