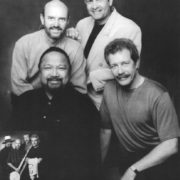 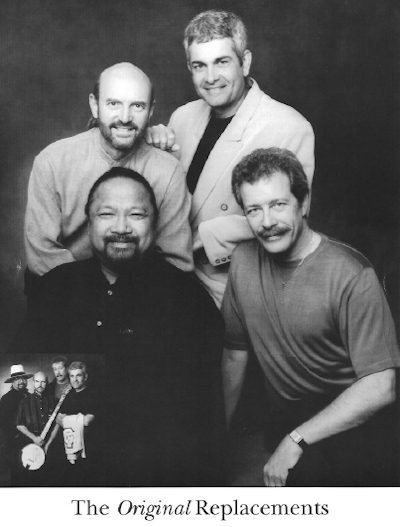 I was looking through my music collection such as it is, mysteriously distributed over several platforms on two computers as well as in a folder or two in my file drawers. There’s another box of files in the shed out back I’m sure but it’s behind the boxes of tablecloths and napkins that Judy has been saving for when the Pope comes over for lunch someday. We have to keep up appearances you know. Anyway, during these music meanderings through the storage wilderness I often find little threads of history that when pulled, unravel panoramic views of times and places and casts of characters that come to life before the eyes.

It was simply called “The Original Replacements” and I remember having George send it to me years ago when our special group of friends gathered in the early part of the last decade and concertized annually in early summer up in Big Bear at the home of our dear departed brother in arms and music, Father Joe Frazier whose star rose in the ‘60s as the baritone voice in the Chad Mitchell Trio. Joe had retired by then, gone back to Yale Divinity school and had become Vicar of the Episcopalian church in Big Bear California. George Grove, Ron Greenstein (Chad Mitchell Trio bassist), Jim Moran (who was to become a co-host with me on KPFK eventually). George had been a stalwart replacement player in the official Kingston Trio. Banjo, guitar and baritone. George stayed with the Trio for almost forty years once the originals had retired.

Back to “The Original Replacements.” That’s who they were. I’ll explain. When the sixties folk music rage subsided into the folk-rock era and the protest years, the older groups (The New Christy Minstrels, my group included) began replacing members and continuing in an ever slowly downward money spiral. Although still viable in smaller venues, many of these groups continued on, replacing members as they went, continuing the repertoire that their public expected. There was money to be made, perhaps not as much as before – the originals in those groups had taken their booty, hired qualified folksinging replacement personnel and they themselves had moved to higher ground and to other endeavors.

So, to the music track that started this stream of consciousness article. Who are these guys? The Original Replacements. In their own words:

“Imagine if you could blend the pop harmonies of The Association with the folk harmonies of the Kingston Trio. Now, add the doo-wop bass of Sha Na Na and the ethereal falsetto of The Letterman, and what would it sound like? Voila: “The Original Replacements!”

Guerin Barry – You’ve probably seen his face on numerous TV commercials and heard his unique whistling talents on endless recordings and commercials as well. Guerin has the unique talent and ability to whistle two notes in harmony simultaneously. I’ve tried it and had to be treated for lockjaw. Guerin stood in as Tito with those greasers of Woodstock and TV fame, the group Sha Na Na.

Larry Ramos – I personally met Larry when we did a gig together back in late 61 somewhere in a coffee house in the South Bay area of Los Angeles. I dragged him with us when we were forming the New Christy Minstrels. The kid (younger than me y’know) could learn any stringed instrument almost overnight. I watched him pick up a banjo from scratch and within two weeks out-blaze any of us in the Minstrels, me included. He’s the Hawaiian kid in all of our videos and when we all scattered, I suggested to the guys in The Association when they were looking to replace one of their original members that they take a good hard look at Larry. As it turned out, they already knew about him and sure enough, Larry ended up with The Association for the rest of their run which was huge. Larry left us a few years ago. I spoke with him at length just a few months before his passing and we discovered that each of us had gotten our first breaks in music on … of all places …. The Arthur Godfrey Show! Who? You ask? Never mind. Look it up.

Next: Robert Poynton. In 1990 Bobby became a member of The Letterman. Six albums and a thousand concerts and three million air miles later, he returned to his roots and a successful acting career including lots of film and television. A very wise change of direction. Lots of folk singers tried that route once the blush was off the peach but few were as successful as Robert. I remember that Karen Black was a member of our group, The New Christy Minstrels, for a while. Kenny Rogers successfully moved into acting after he left the Minstrels too. Kenny’s another one of my stories but later. This is about the replacements.

There you have it. Four gentlemen who, had they been born at the right time, may have blazed the music trail that created the golden age of the sixties. Instead, their lineage plunked them smack at the end of it all and relegated them to blowing on the embers to keep the flame alive. Yes, these gentlemen are the brave heroes who were the army of talented and eager performers who missed the first train out of the station in their respective fields of music passion but were happy to be lucky enough to have caught the bus. The money was OK and after all, show biz is show biz, and a spotlight and a microphone, along with an appreciative audience combined with a paycheck is what it’s all about. Right? So it’s not the big time. But it’s close. All you have to do is close your eyes and the cruise-line crowd before you is a throng at Yankee Stadium or the Hollywood Bowl. Rows of middle aged ladies and gentlemen, eyeglass frames glinting in the reflection of the stage lights, morph into visions of young faces and bodies eagerly drinking the performance and lip singing the songs along with you. It ain’t the big time, but it will do. Besides, there is always a plate of celery and carrot sticks, and bottled water in the Green Room.

Perhaps we should establish an award ceremony for these soldiers who have so bravely carried the torch handed them so gallantly through the cities, towns, cruise ships, and school auditoriums of this world. I would be in favor of it. In many many cases, their talent has been equal to and sometimes superior to their predecessors, but timing is everything as the wisdom dictates.

So without further adieu….

The Original Replacements! – “So good, you’d think it was the real thing”