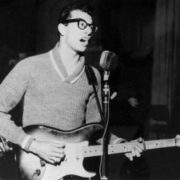 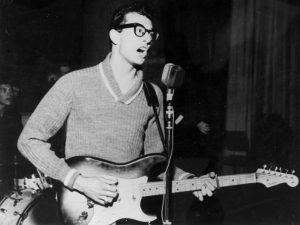 As President of UCLA SDS, I went to Clear Lake, Iowa—where Buddy Holly’s plane went down sixty years ago February 3, 1959—in 1966 for the national conference of SDS, Students for a Democratic Society. While confronting political issues stemming from the War in Vietnam, the emerging women’s movement, and the future of SDS (nobody foresaw the Weathermen), I also reveled in musical memories that flooded in from the proximity to where Holly and Ritchie Valens and J.P. “The Big Bopper” Richardson lost their lives—the day, as Don McLean would later memorialize it, the music died. It was a weekend to remember.

To begin with, I had my own Peggy Sue—in training as an Egyptologist at my alma mater, UCLA. She carried the largest book bag I had ever seen—filled with tomes about the Near East and Ancient Egypt. I met her—appropriately enough—at the Gypsy Wagon on North Campus, where students ate lunch outside. She was my Maria Elena—Buddy’s wife—for me at least it was love at first sight. Wire-rimmed glasses, long brown hair and long paisley dresses made her stand out in any crowd. She had brilliant eyes and a winsome smile and was my first girlfriend. I love her still—to this day. She had True Love Ways. Every time I hear Buddy’s beautiful song it all comes back to me. Even after it ended I would sing Everyday—love like yours will surely come my way—a hey, a-hey hey. She was the hiccup in my voice. 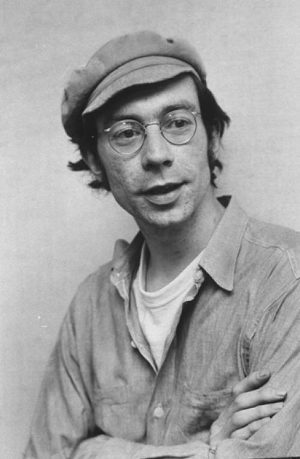 At the conference we were bidding adieu to National SDS President Carl Oglesby—who was himself a singer-songwriter and great speechwriter and political speaker. He had given the most eloquent and richly informed speech denouncing the war at the SDS March on Washington the November 27 before—the last speaker of a long day—whose “Let Us Shape the Future” address became more anthologized than any other document of the 1960’s. He was our signature “Rebel with a Cause.”

“Rave On!” I remember thinking every time I heard him talk. And this final appearance was the most important of all the times I heard him—it was the talk that made me fall in love with American history. Nobody wanted to see Carl go—we knew we would never find a leader of his stature. SDS presidents served only for one year, but we were willing to change the rules to keep him on.

Just as we were about to vote on it, Carl suddenly jumped up on an unoccupied table in the dining room and started to give his final talk as our president. He reached back to the founding of our Republic to put this in proper historical perspective: George Washington was offered to be made “President for Life,” after serving two terms. His farewell address to the country said that while he was honored by the gesture and sentiment it expressed, we had just fought a revolution to get rid of one king, and didn’t need to install another. With that he went back home to Mt. Vernon, Virginia. That was Carl’s farewell to us, and to see him walk away from power made me respect him even more, and fall in love with history to understand the present in light of the past. As William Faulkner said in his 1948 Nobel Prize speech: “The past isn’t dead—it isn’t even past.” Rave On!

Carl’s love was for real—Not Fade Away. When he left SDS he devoted himself to his music, writing songs and recording two albums for Vanguard Records—1969’s eponymous Carl Oglesby and 1971s Going to Damascus. It was a time when music became more than the soundtrack to our lives, but a soundtrack to history as well, and Carl’s was one of them. His work resonates in that spirit today, and may be found on the web, in a re-release of those two classic albums, with notes; here is the most useful link: https://sites.google.com/site/oglesbysongs/home

Carl also figured out how radical students of that time could travel to Cuba—decades before President Obama formally reopened the borders to legalize it. Oglesby put together a legal itinerary involving layovers in other countries that had no travel restrictions from the U.S. Government—and then organized what he called the Venceremos Brigades for students to travel with. Lenor de Cruz—with whom I traveled to Clear Lake by a chartered bus—joined it and is a friend to this day. I wasn’t about to tempt fate and take a plane—that’s why I went by bus. Lenor cut sugar cane in Havana during their second expedition and got to meet Fidel!

To delve into the deliberative songs Carl left behind when he passed away on September 13, 2011, six days after Buddy Holly’s 75th birthday, consider one line that will lead you to many: Your houseboy’s body, floating face down in the river.

Ravens in the Storm is Oglesby’s riveting memoir of the 1960s antiwar movement. A singing historian is how I still remember Carl.

Buddy Holly is Lubbock, Texas’ greatest native son—the reason Jimmie Dale Gilmore and Dave Alvin called their recent collection From Downey to Lubbock. He inspired Bob Dylan early on, at a concert he gave in Duluth, Minnesota the year before he died. Dylan writes in his memoir, Chronicles, that Holly looked right at him in the front row—seemingly right through him—as if to pass the torch to the kid who would one day become the greatest songwriter of his generation. Dylan never forgot that eye contact, and to this day performs Holly’s Not Fade Away—as much for its Bo Diddley beat, as its lyrical steadfastness:

You’re gonna give your love to me

Love’s for real, not fade away.

Bob Dylan, like the Quarrymen (That’ll Be the Day was their first record—before they became the Beatles, inspired by the insect name of the Crickets), like the Stones (Not Fade Away was their first top ten hit), like Jimi Hendrix and Eric Clapton (who used the same Fender Strat), Buddy Holly inspired the greatest rock & roll singers to come after him. He was the first major artist to use the Fender Stratocaster—a 1955—as his instrument—and thus the primary inspiration for Dylan to trade in his acoustic guitar for the electric he adopted in 1965 at the Newport Folk Festival. After Buddy’s hit song, John Prine’s record company is named “Oh Boy! Records.” Buddy Holly was the trailblazer for modern rock & roll—without whom it cannot even be imagined. Born September 7, 1936, he was only 22 when he died. 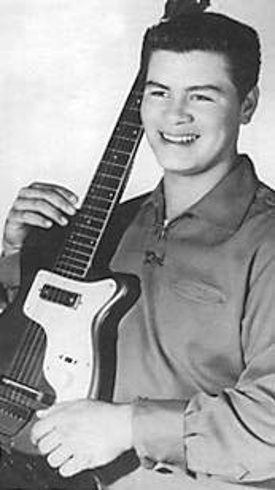 Ritchie Valens was even younger than Buddy Holly—only17—and had the first big rock and roll hit in Spanish—La Bamba, sometimes called the Mexican Wedding Song, which he recorded and released in November of 1958. He learned how to pronounce the Spanish words phonetically—not speaking Spanish though he grew up in Pacoima—from his aunt Ernestine Reyes. It was ranked # 345 on Rolling Stone’s 500 Greatest Songs of All Time—the only song on the list not performed in English. The other best known of Valens’ hits was his song for his high school sweetheart Donna—notable for its 50s chord progression that became known for its family resemblance to such songs as Ben E. King’s Stand By Me and—most meaningful to me—Pete Seeger’s Where Have All the Flowers Gone: C—Am—F—G. But it was Ritchie Valens whose song first defined that musical setting.

The third member of the trio of great rock and roll artists who perished in the crash near Mason City, Iowa, just eight miles from Clear Lake was J.P. “The Big Bopper” Richardson—who at 28 was the oldest. His biggest hit was also recorded in 1958: Chantilly Lace—a comic masterpiece and persona that set him apart from his rock and roll colleagues. Another comic gem he wrote, White Lightning—a moonshine classic—became George Jones’ first hit in 1959. A third comic masterpiece from his pen, The Preacher and the Bear, became a “hit” for me at retirement homes throughout L.A.—about a preacher who went a-hunting and met up with a great big grizzly bear:

Oh Lord, didn’t you deliver Daniel from the lion’s den

Also deliver Jonah from the belly of the whale and then

Oh Lord, if you can’t help me for goodness sake don’t you help that bear.

It’s a classic folk tale set to music by the Big Bopper, and endeared him to me as soon as I heard it. 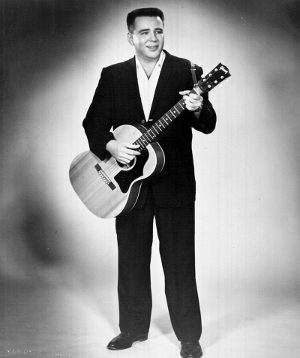 The final irony in this tragic tale is that Valens and Richardson weren’t even supposed to be on the plane—Holly chartered it for his band—and Dion of Dion and the Belmonts. The other featured stars of the Winter Party Tour were supposed to take the bus—but other considerations prevailed. Dion decided not to go on the plane because it cost $36 a seat, and he was a Depression era kid for whom $36 was a month’s rent—he couldn’t see spending it all to save a couple days travel. So he gave his seat to Ritchie Valens. Waylon Jennings was in Holly’s band and he didn’t like the temperature aboard the plane—so he too opted to take the bus and gave his seat to Richardson. He got into an argument with Holly over the decision and Buddy told him “Well, I hope your bus freezes over.” Jennings’ last words to Holly were, “Well, I hope your plane crashes”— which haunted the future country outlaw for the rest of his life.

Ross Altman has a PhD in Modern Literature from SUNY-Binghamton; he belongs to Local 47 AFM; Ross may be reached at greygoosemusic@aol.com