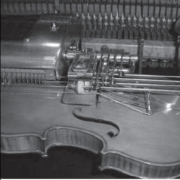 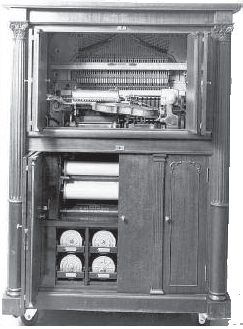 Continuing my quest to see a mechanical violin in action I eventually found that the Merle Norman Cosmetics Company had a Museum of Beauty in San Sylmar, California. The museum had nothing to do with their line of cosmetics, instead it housed restored classic cars on the first floor and the entire second floor was music boxes — from tiny ones inside of pocket watches all the way up to a huge Wurlitzer Organ. It was here that I finally saw the Violano-Virtuoso that played one or more violins with piano accompaniment. It was a mechanical wonder that represented the height of the coin-operated mechanized music machines that were so popular up until the advent of recorded sound (the record player and the jukebox). The museum had a free two-hour docent led tour of their spectacular collection in a truly magnificent building made in old world style by all local artisans. I believe the collection is still intact but is now part of the Nethercutt Collection in Sylmar, California (see the ON THE- WEB information below). 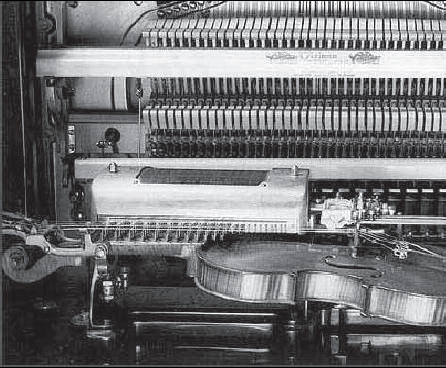 The Violano-Virtuoso was a product of the Mills Novelty Company. The forerunner model, known as the Automatic Virtuoso, was first marketed in 1905 and played only the violin. In 1912 they added a 44-note piano (half of the 88 notes on a standard piano) and this violin-piano combination was sold as the Vi o l a n o – V i r t u o s o . Machines with two violins were known as the De Luxe Model Violano- Virtuoso, or more familiarly as the “Double Mills”, and are now quite rare. Eventually there were models with up to three violins. Production continued until 1929.

There are some clever differences as to how the instruments are played by the mechanical device rather than by a person. First, there is no violin fingerboard; instead a chromatic set of small metal “fingers” activated by electromagnets lift the string up into “V” shaped grooves to stop the string at the proper length. Nor is there the usual bow made of horsehair; instead the strings are “bowed” by four small self-rosining wheels composed of disks made of cellulose nitrate and driven by variable speed motors, which act as a volume control. Vibrato is produced (on all strings at once) by the tailpiece being shaken by an electromagnet. The Mills Violano-Virtuso can do some things that could not be done by its human counterpart. For example, since all four strings can be played simultaneously, four-part independent counterpoint is possible.

The hidden hero of this story is Henry Konrad Sandell who was the main inventor of the Mills Violano-Virtuso. Unlike the player pianos of the day, which operated pneumatically, Sandell’s device was all-electric using an electro-mechanical system of solenoids and motors and was designed to operate on 110 Volts D.C. Consequently he had to invent many of his own devices winding up with well over 300 patents. He imbued the machines with a number of fascinating devices that still amaze those who study them even to this day. These include: the rotating bow wheels, a five-speed digital motor, a pulsemodulated feeder governor, the staccato coil that cause the “bows” to leave the string a fraction of a second before the “fingers,” a sophisticated array of tuning arms and weights to keep the violin strings in tune, and a unique symmetrically strung piano frame, with the bass strings at the center and the treble strings radiating out to the edges. This distributed the string pressure more evenly across the frame and made the piano stay remarkably in tune.

The Violano-Virtuso used punched paper rolls to store the tunes, usually five tunes to a roll. The coin operated machines could accept up to fifteen coins in a group which would play the roll of five tunes three times providing about an hour’s worth of continuous music. Coins could be added at any time even from remote boxes, but individual tunes could not be selected. Over time, the Mills Novelty Company produced approximately 3,121 different rolls. The Mills Novelty Company produced between 4 and 5 thousand instruments. 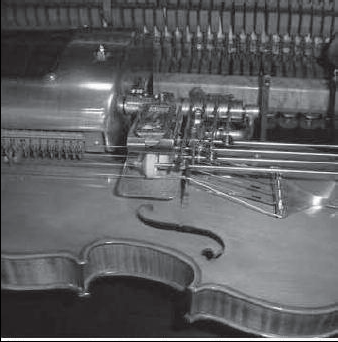 Today, some sources estimate that only about 750 of the single machines and fewer than 100 of the Double Mills still exist, while other sources estimate that several thousand machines may have survived. The Violano-Virtuoso has the highest survival rate of any type of player piano requiring as little maintenance today as when they were first installed. The remaining instruments are highly sought after commanding prices in the $20,000 to $40.000 range. The name “Mills Novelty Company” still survives today in the form of a business that installs digital player systems in the Mills Violano-Virtuoso – sort of the antiiPod approach to MP3 players. Now you may wish to visit the web sites listed below so you can see and hear this amazing musical artifact. I hope that you enjoyed this as much as I did and, until next time, please stay tuned