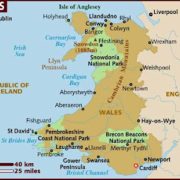 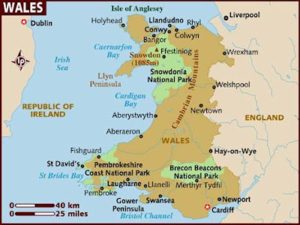 I traveled to Wales in 2018, on my way to London, following of one of Ken O’Malley’s tours of Ireland. I had long been a huge fan of the British television program The Prisoner, which aired in the US in the mid-1960s. It was my dream to someday see the beautiful Welsh town of Portmerion where the show had been filmed. I took the ferry from Dublin to Holyhead in Wales to begin my journey and what I found there was more than just a simple visit to a beautiful place.

Portmerion itself is quite unique. Welsh architect Clough Williams-Ellis acquired the coastal property in 1925 and began to fulfill his dream of building an aesthetically beautiful Mediterranean styled village. As words alone can’t do justice to Portmerion, here is a brief virtual tour:

The drive south from Holyhead through North Wales, on the well-maintained expressway hugging the coastline, was lovely. Staying in Caernarfon, it was readily apparent that Wales had a vibe all its own. Unfortunately, a three day stay was all too brief. I wanted to know more and see more, and I certainly plan to return. As traveling in person is not on the horizon in the near future, I invite you to join me on this brief virtual visit to enjoy some of the music of this unique country.

When we think of the Celtic Harp, Ireland comes to mind. Wales, however, has its own version: the Welsh Triple Harp. The instrument has three rows of strings with the two outside rows holding the diatonic notes (think of the white keys of a piano) and the inside row holding the chromatic notes (the black keys). Welsh harpist Robin Huw Bowen gives a detailed explanation and demonstration in this video – in Welsh with English subtitles:

There are also traditional folk songs such as this beautiful version of Dacw ‘Nghariad (There is my Sweetheart) sung by Eve Goodman:

Wales also has a long tradition of choral music; a well-known favorite is Myfanwy, a hymn-like song of loss, often presented by a men’s chorus such as this beautiful version sung by the Treorchy Male Choir. It is an abbreviated version of the song, but I selected it because it was filmed on the streets of Wales. There are more complete versions on YouTube and in multiple recordings, many with English translations of the lyrics; I thought that this one elegantly captured the soul of the country:

It is no surprise that Wales also has its own style of traditional costume and folk dance. Here is a sample: 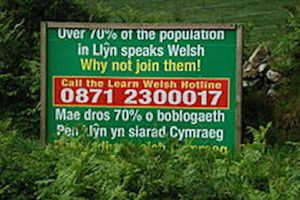 The Welsh language and cultural heritage has survived through difficult times. In the mid-19th Century, the Welsh were viewed as lawless inferiors and there was considerable pressure from England to discourage children from learning and speaking the language. Fortunately, in the late 20th Century, more enlightened views prevailed, resulting in laws that require equal treatment of the Welsh and English languages by all government agencies. Within Wales, the preservation of the language and culture is now strongly encouraged.

With COVID keeping us close to home, it is good to know that “armchair travel” on the Internet is still available. I suggest Wales as an interesting and delightful destination.

THE FOLK CULTURE OF WALES