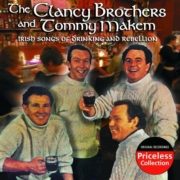 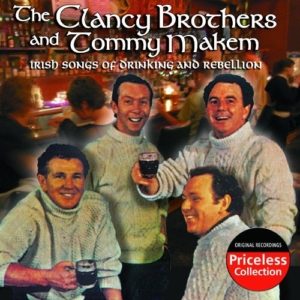 It began in Ireland in a small town in County Tipperary when, in 1922, Patrick “Paddy” Clancy was born to Joanna and Bob Clancy. Two years later another son, Thomas “Tom” Clancy came along and, in 1935, Liam “Willie” Clancy came along. When World War II broke out, both of the elder brothers served in the RAF; Tom serving as a radio operator and Paddy as a mechanic.

After the war ended, Tom and Paddy decided to come to America where the entertainment industry was booming – and New York offered opportunity for actors in off-Broadway shows as well as television. This was heaven for the two brothers as they wanted nothing more than to be professional actors.

Although acting was their primary objective, Tom and Paddy were also drawn to the live music scene in Greenwich Village which, at that time, brought together an eclectic mix of visual artists, poets, and musicians such as Bob Dylan who later became a good friend and admirer.

In 1955 Tom and Paddy met Diane Guggenheim who, at that time, disguised her affluent pedigree by using the pseudonym Diane Hamilton. A lover of folk music, she was particularly impressed with the Clancys, asking Paddy to run her record company called Tradition Records. She later expressed interest in traveling to Ireland to record traditional music of the Irish countryside, so Paddy and Tom put her in touch with their younger brother Liam who assisted her in transporting her recording equipment for the project. The journey took them to County Armagh in Northern Ireland where they recorded Sarah Makem, a well-known traditional Irish singer. Liam and Sarah’s son Tommy quickly became friends, particularly bonding over their shared desire to someday come to America and become actors.

That wish was fulfilled quickly for Liam as, two weeks after the project ended, he received a ticket to travel to New York City, courtesy of Diane Hamilton. A year later, Tommy Makem traveled to New Hampshire where his uncle had a furniture factory; while there he decided to take a trip to New York to see Liam and his brothers. It was then that the foursome decided to sing together and record an album of Irish rebel songs including “The Rising of The Moon” which also became the name of the album. Meanwhile, all four became working actors.

While the acting jobs continued, the four were also receiving more paid opportunities to sing in local clubs. Having not come up with a band name, they were billed as “The Clancy Brothers and Tommy Makem” on a marquee at one of the clubs and so the name stuck. By this time, they had a manager, Marty Ehrlichman, who offered to help them build their musical career If they would agree to devote themselves to music rather than acting for six months.

It was a particularly cold winter when they embarked upon this new venture and, out of motherly concern, Joanna Clancy sent all four some classic Aran Island sweaters. As soon as Ehrlichman saw them, he immediately proclaimed that they would be the perfect look for the ensemble. They were also being booked by more upscale clubs such as The Blue Angel and it was there that their fortunes changed. A booker for the Ed Sullivan show offered them the opportunity to appear as a supporting act for the headliner: singer Pearl Bailey.

When they arrived for the show, they were informed that Pearl Bailey had to cancel her appearance and were asked if they could provide a longer performance than had been originally scheduled. They wholeheartedly agreed and over 11 million viewers saw them perform live on television throughout the US. Here is a clip from the Ed Sullivan Show:

From that point forward, the Clancy Brothers and Tommy Makem were well known both in the US and abroad, signing with a major record label, performing at Carnegie Hall and other major venues, and even receiving an invitation to perform at the White House for US president John F. Kennedy which they gladly accepted. Tommy Makem left amicably in 1969, to be replaced by another brother, Bobby Clancy, although the original four briefly reunited for a reunion tour in 1984. None of the original Clancy Brothers or Tommy Makem are still with us, though their influence in the world of Irish music continues to this day. Search for them on YouTube and you will find a wealth of interviews and live performances.

Recently I had the privilege of attending a new musical tribute entitled “Tommy and the Brothers” here in Los Angeles. The show is co-produced by Thom MacNamara and Ken O’Malley, written and directed by MacNamara, with musical direction by O’Malley. The four actors, Joel Mankey as Tommy Makem, Sean Faye Cullen as Paddy Clancy, Danny Oberbeck as Tom Clancy, and Dalton Maltz as Liam Clancy are spot on with their embodiment of these storied musicians. I loved the show so much that I just had to see it a second time! The show has sold out performances at the Irish Import Shop’s Wren Theatre in LA, and plans are underway to bring it to other (and larger) venues. If you are interested in knowing more, check out the website or email ThomMacNamara@yahoo.com. You can also sign up for the mailing list on the website to be informed of future performances.

As I left both shows, I heard many comments from others there (most of whom I didn’t know) about how much they enjoyed the show; I heard several ask when another performance would be scheduled. Given not only my own assessment of this wonderful show but everything I heard from others, I am sure that by the time you read this column, other shows will have been announced. The production team and the actors hope to take this show on the road beyond Los Angeles, so join the mailing list and contact Thom MacNamara if you think that any venues in your area may be interested. 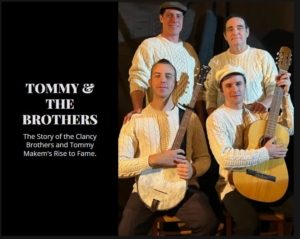 The Clancy Brothers and Tommy Makem

The Story Continues to be Told