Where would we be without the ability to laugh at ourselves? And, of course, there are jokes about just about any instrument as well as musicians in general. Besides, I’ve heard every lawyer joke there is including the one the substitutes “lawyer” for “accordion” in the third example above. 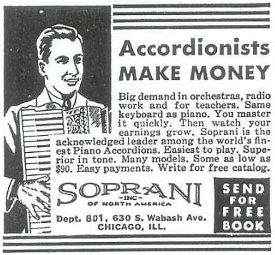 The accordion has always intrigued me. Many years ago, I was in a pawn shop in Las Vegas and saw a beautiful turquoise piano accordion and thought about buying it. However, I didn’t have the knowledge to determine whether or not it was in good condition or worth the price. I continued to think about that accordion after I left the shop and can still picture it to this day. 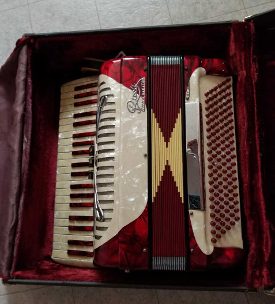 A few years ago, my very good friend and radio co-producer, Christopher, passed away. As his executor, I was helping the person named in his will to sort through everything. He brought to my attention something that looked like a sturdy but very old suitcase and said “I don’t know what to do with this. Would you like to have it?” I took a look inside and was amazed when I saw the contents – an accordion identical in every way to the one in Las Vegas only this one was red, not turquoise. How could I say no? It felt like it was meant to be.

It turned out that the accordion was in excellent condition and apparently hadn’t been played in years. I certainly didn’t expect to find it nor did I expect to find a bonus: a photo of Christopher as a child playing this very instrument. 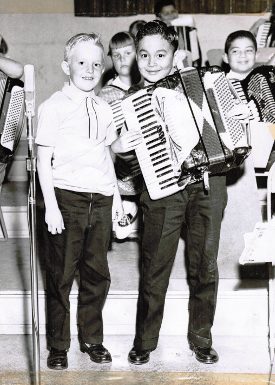 So, I began my quest to learn more. I thought to myself that I ought to be able to figure this thing out pretty quickly. After all I had about five years of piano lessons and also played guitar (like every other folkie girl from my generation) so I figured “how hard could it be?” I quickly found out that when a piano keyboard is turned sideways and the only way you can see it is with a mirror, it is not such an easy task. Also, though I once could read music, it had been many years since I properly played sheet music as written. On the rare occasions that I would touch a keyboard, I would generally play the melody and “fake” the left hand by simply improvising the appropriate chords. This meant that my familiarity with the bass clef was about on par with my understanding of physics.

I’m still not ready for prime time nor even a performance for any other human being. I am pretty sure that the cats wouldn’t like it much either. I downloaded a wonderful app for my phone called “Musical Note Flashcards” by One Hundred Percent Man, LLC. It’s great for any time I have to sit and wait and easy enough to run through a few notes quickly. I also bought “Mel Bay Presents: The Mighty Accordion” by David Di Giuseppe, which comes with a CD and is a very good tool for someone wanting to get started. I have yet to find a source for more time and discipline, but when I do I plan to take some proper lessons at the well-known “Dave’s Accordion School” in Atwater Village.

The accordion is indeed mighty, but I will persevere.