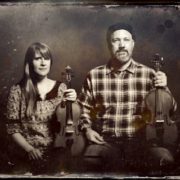 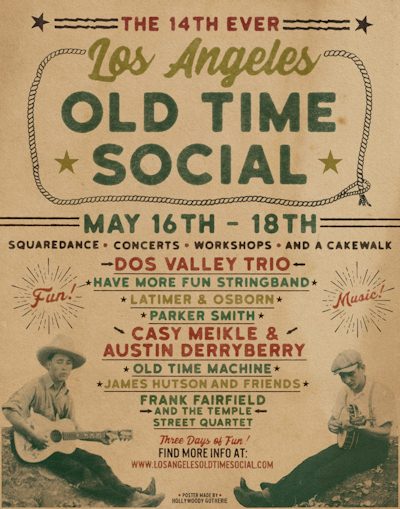 The Los Angeles Old-Time Social is May 16-18th!! Musicians from all around North America arrive to jam, dance, learn and perform for this three-day event! This year we have musicians from California, Arizona and Nashville performing and teaching world class traditional music. For more info and pictures go to the Old Time Social website.

Thursday Night (May 16th) is the Kick-Off Concert/Party at the Tropico De Nopal Gallery.

Saturday All Day (May 18th) at the American Legion Hall

Is a full day of workshops including old-time fiddle, flatfooting, sacred harp singing, old-time guitar, clawhammer banjo, 2-finger banjo and a fiddle duet workshop by Susan Platz and yours truly! You can attend as many workshops as you want for only $20. The workshops are immediately followed by the greatest Cakewalk in Los Angeles and an epic square dance featuring the concert musicians and dance callers Susan Michaels & Robin Fischer! (All Ages and very family-friendly!) You can pre-register for workshops by contacting davidbragger@gmail.com or just show up!

Without further ado, here is this year’s workshop schedule. See you at the Social!

For questions and to RSVP (not required but helps with head count), please contact Workshop Coordinator David Bragger: davidbragger@gmail.com

The Sacred Harp Beginners Club began one day in LA in the comforts of someone’s home or on the tip-top of a glorious hill. They met week after week with creative hiatuses now and then only to continue as beginners three years later. A group of trained perfectionists and genuine newbs, they still review the songs section by section, singing through all versus in order to achieve the greatest satisfaction.

Flatfooting, Buck Dancing and Clogging are related, but different styles, of foot percussion.   Freestyle flatfooting is improvised, in which every dancer finds their own expression.   I will start by teaching you some basic steps to get you going, and then we will focus on playing the tune with our feet!

No previous dance experience is necessary.  No special equipment.  Just shoes that can slide forward and back (ie, no sticky soles), and clothing you can sweat in!  It’s easy and fun and very aerobic!

Ruth Alpert has been flatfooting for 34 years.  She has taught workshops, danced with old-time Appalachian string bands, busked (street performed) in various cities in at least 6 states, and is a two time National Champion in Senior Buck Dancing, 2013 and 2014.  Currently, Ruth is the percussion section of The Honeysuckle Possums, an all-female string band playing original and traditional music.

Practice flatfooting with a live band! Ruth Alpert and a group of old-time jammers will provide the music and support for flatfooters to try out their new dancing skills with Ruth’s guidance!

Harry and Cindy will go over some of their favorite tunes from the San Joaquin Valley. Harry will teach the fiddle tune and Cindy will talk about the best way to back them up on guitar. This will be a wonderful workshop for fiddlers, guitarists, and anyone interested in Old-time music.

Harry Liedstrand met Kenny Hall in 1967 and started learning traditional fiddle tunes from him.  He played fiddle in the Sweets Mill String Band with Kenny Hall, Jim Ringer, Ron Tinkler and Cary Lung for many years.  The SMSB toured the country with the Portable Folk Festival in 1971.  Harry visited Burl Hammons and Tommy Jarrell in the early 1970’s and continued to collect tunes and learn regional fiddle styles.  His energetic and creative fiddle style has kept him in demand as a performer and teacher of traditional fiddle music.

Chris Berry plays guitar and banjo in the old-time stringband Sausage Grinder. He is considered one of the greatest interpreters of old-time back-up guitar in the world. He is also a master of country blues guitar and fingerpicking banjo.

Get in touch with your mandolin’s inner banjo!  Kenny Hall learned some of his wonderful mandolin tunes from banjo players. Terry will teach some of these and show how Kenny adapted those tunes, changing them to suit the mandolin yet keeping some essence of their origins as banjo tunes. 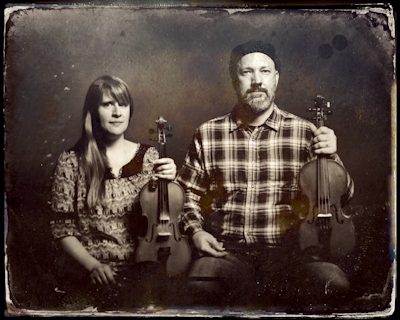 David Bragger plays fiddle in the old-time stringband Sausage Grinder. David teaches old-time fiddle, banjo and mandolin to students of all ages and levels. He is also the founder of the Old Time Tiki Parlour (oldtimetikiparlour.com) which produces concerts, workshops, CDs and films by the finest old-time musicians alive, including Kirk Sutphin, Dan Gellert, Bruce Molsky, Paul Brown, Eric & Suzy Thompson, Mike Compton, Joe Newberry, Scott Prouty, etc. David is in high demand as a fiddle teacher at festivals and has private students in four continents! He is known for his ability to break down tunes and bowing with ease and clarity.

Austin Derryberry has played old-time fiddle since age five. He has won local and regional old-time fiddle championships, including the Old-Time Fiddler of the South honor at the 2015 Great Southern Old-Time Fiddlers’ Convention and the Alabama State Old-Time Fiddle Champion title at the 2015 Tennessee Valley Fiddlers’ Convention. Derryberry is learning to make violins under the mentorship of luthier Jean Horner as part of the Tennessee Arts Commission Traditional Arts Apprenticeship Program, an initiative designed to promote the survival, evolution, and expansion of Tennessee’s diverse folk traditions.

In 1968 Tom Sauber began playing with (and learning from) old-time musicians who had left their homes in the Southeastern U.S. and resettled in Southern California; fiddlers Earl Collins from Oklahoma, Mel Durham from Illinois, and Bob Rogers from Tennessee; also Ed Lowe, clawhammer banjo picker and nephew of Round Peak legend Charlie Lowe. Since the late 1970s he has performed and taught at major festivals and music camps in the U.S. and internationally. In addition to his aforementioned mentors, he has performed and recorded with contemporaries such as Alice Gerrard, Brad Leftwich, Blanton Owen, Tom Carter, Dirk Powell, Ry Cooder, Mark Graham, and his son Patrick Sauber.