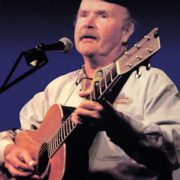 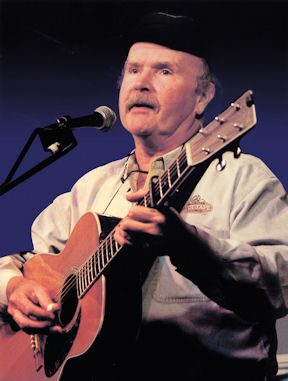 Tyrannosaurus Pax, better known as T. Pax, may soon be sighted along the Pico corridor in Santa Monica lumbering towards McCabe’s Guitar Shop, where he is rumored to star in a Cretaceous Age Exhibition at the end of March. Emanating from a distant Eastern village known as Greenwich, where in the early 1960s it reigned supreme with its close cousins B. Dylan, P. Ochs and D. Van Ronk, T. Pax somehow managed to evade the encroaching ice formations of Disco, Heavy Metal and Glam Rock that cut down the peaceful easy singer-songwriters of the 70s.

Half a century later, almost alone amongst its mostly extinct brethren, the cumbersome T. Pax continues to amaze audiences with its ancient birdlike brilliance that towers over more modern creatures only able to reach above its bony webbed claws and spindly legs.

With just another throwback to an earlier age, the nearly extinct all-wooden instrument known as Acousticus Guitarus for accompaniment, T. Pax stands like the sentinel meerkat before a single microphone and gurgles its tuneful news reports to the local citizenry, sounding for all the world like the Town Crier of the Middle Ages.

Sometimes referred to as a wandering minstrel, stone-age troubadour, folk singer or worse, the bald-headed (disguised for many years by a tell-tale Greek fisherman’s cap) T. Pax has a hatful of songs and social commentary to rile the somnambulant, comfort the afflicted and afflict the comfortable.

Though he has written his share of antiwar songs over the years, unlike his early co-conspirators in the counterculture, T Pax actually served in Uncle Sam’s army, which was most notable for teaching him how to type. While other soldiers mastered this outmoded skill by working their way through standard issue exercise books, T. Pax practiced his typing by writing out topical songs, love songs and children songs he managed to compose under the watchful eye of his gunnery sergeant. The first one he regarded as a “keeper,” was called The Marvelous Toy, and is now considered a classic: “It still goes zip when it moves and bop when it stops and whir when it stands still/ I never knew just what it was and I guess I never will.”

This author once composed a limerick that summed up his early days and resilience as follows:

Started out singing for Cokes

But Tom still sings for the folks.

Who else in contemporary music has written enchanting children’s songs, powerful protest songs, comic gems that illuminate common human foibles and show the Emperor has no clothes, and lasting love songs that are heartbreaking in their plain human hope:

You can send me away and I would go

I would go but I would not go too far

You can send me home but you would know,

Home to me is anywhere you are.

Home To Me (Is Anywhere You Are)

I can’t think of a one; can you?  When T. Pax leaves the scene, that job will go a’ begging.

T. Pax has always had a knack for mixing the timely and timeless in a way that gives full value to both. What he calls his “short shelf-life songs” appeal to the headline watchers in his audience while the more durable classics that go to the heart of the human condition like Ramblin’ Boy and Last Thing On My Mind keep them coming back for more.

To a longtime T Pax observer like me, the short-shelf life songs are just as canny and important as the classics, and once heard have a staying power all their own.

I still remember the time T. Pax saved one of his best of these satirical broadsides for an encore—usually the place where one sticks to the tried and true. But not T. Pax: he pulled a rabbit out of his hat that memorialized for all time the then-recent sensation of Rubric’s Cube, called It’s Only a Game. No one better followed the comic’s credo leave ‘em laughing than this topical troubadour; the audience was in stitches by the time he was through.

A dozen other songs come to mind that both delight and inform T Pax’s listeners with his commentary on the passing parade: One Million Lawyers (“In ten years we’re gonna have one million lawyers/ how much can a poor nation stand?”); I Am Changing My Name to Chrysler, which he has now reworked into I Am Changing My Name to Fannie Mae; Yuppies In the Sky, his brilliant evocation of Ghost Riders In the Sky to lampoon the emerging Young Urban Professionals of the 1980s’ decade of greed; and his classic send-up of Jimmy Carter’s much-maligned encounter with a rabbit: I Don’t Want a Bunny Wunny.

His groundbreaking topical song album The Paxton Report restored one’s faith in the power of song to tell it like it is, after Phil Ochs’s tragic suicide made me wonder if we’d ever hear songs that were “so specific they couldn’t be mistaken for bullshit” again.

But unlike many political satirists and parody songwriters in the Age of Irony, what sets T. Pax apart is his willingness to bypass comedy for a straight-ahead protest song when the situation demands it. There is nothing funny about his chilling putdown of Henry Kissinger in the song The White Bones of Allende. Nor is his best song about the economic catastrophe that followed President Reagan’s busting of the Air Traffic Controller’s Union, Hard Times Are Here Again:

Folks are hunkering down

All the lost and lonely souls

And his feminist labor classic Mary’s Got A New Job still sends a clarion call for economic justice: Who’s been matching you sweat for sweat

Who’s been working on the line

Who’s been earning what she ain’t got yet

All I want is what’s mine

I got eyes and hands and a back like yours

And I use them hard the whole day

I stand here working just as hard as you do

And I want my equal pay

and then the one-line kicker at the very end:

And I want my ERA!

After 9/11 T. Pax ignored the heavy-handed symbolism of many rock tunesmiths for a powerful and poignant ballad about the firefighters who, as he put it so eloquently, were “pounding up the stairs, while we were running down.”

He called it simply, The Bravest.

As Woody Guthrie once warned an earlier generation of musical protesters, “Don’t be afraid to be serious.” T. Pax isn’t.

In today’s political climate no one has captured the dangerous grip that the rightwing NRA gun lobby has on the national debate quite as profoundly as T. Pax’s most recent “short-shelf life song, What If, No Matter…Written in the wake of the attempted assassination of Congresswoman Gabby Giffords, here it is in full, just as she was forced to resign her office to focus on her on-going recovery:

WHAT IF, NO MATTER…

How outraged he was,

What if, no matter how right he was,

How wrong they were,

How evil they were,

What if, no matter how right he was,

No rifle, no pistol,

No shotgun in sight,

No clips crammed with bullets

Anywhere to be found,

No weapons just laying around?

What if, no matter how outraged he was,

How murderous he was,

What if, no matter how outraged he was,

He couldn’t lay hands on a gun.

If he dug through his pickup

The backseat, the trunk

The basement, the attic

And came up empty-handed

Tell me what would he do then?

How outraged he was,

If the job of the folk singer is to transform the impermanent dross of information overload we all must sift through to decide what is necessary to know, what is worth remembering and what can be ignored and forgotten into memorable speech—which is how W.H. Auden once defined poetry—no one does it better than Tom Paxton. And he has been doing his job for nearly fifty years, staying true to his old muse—an almost quaint sense of justice easily offended by hypocrisy, greed, prejudice and brutality.

Perhaps that is why he has yet to be invited to the White House to sing: he has never been afraid to sing truth to power and let the chips fall where they may. If you “can’t help but wonder where you’re bound, where you’re bound,” to quote another of his early classics, get yourself to McCabe’s at the end of March (the 30th and 31st) or AMSD Concerts in San Diego on April 1 and hear an essential American voice that continues to challenge us both as individuals and a nation. One guitar; one voice; that’s all Tom Paxton needs. Don’t you dare miss him!