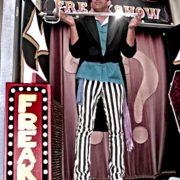 SWORD SWALLOWERS, SAUSAGE GRINDERS, AND LIGHTBULB EATERS OR THE STRANGEST GIG OF MY LIFE

When I entered the California Institute of Abnormal Arts (CIA) for sound check, I was greeted by the old time sounds of a calliope huffing and puffing the fiddle tune Arkansas Traveler. We seated ourselves on the stage and fumbled through our microphones and cables while the soundman frantically ran around trying to locate the source of feedback. It’s still debatable whether the issue was ever resolved. While they were working on methods for amplifying the jug and slide whistle, I just stared into the weirdness that is CIA. This is a dream venue for the old time musician.

It is Alice in Wonderland. It is a circus sideshow. I 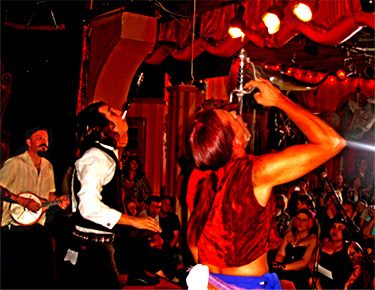 t was the set for the film “House of 1000 Corpses.” A life-size pirate mannequin and a trophy shark flank the seating area. The bar area has glass cases that house real sideshow relics. There is a mummified alligator boy and even a Fiji mermaid! Imagine a composite of Salvador Dali, P.T. Barnum, and pure opium parading as a performance venue. In addition to a selection of beers I think they’ll even provide you with a grilled cheese sandwich! After seeing a minstrel themed marionette show there a couple years ago, I’ve always wanted to perform there.

On this particular Friday evening, Sausage Grinder acted as house to Todd Ray’s Super Freak Sideshow. The Super Freaks recruited us online when they came across the Sausage Grinder myspace site: www.myspace.com/sausagegrinderband. Who are the Super Freaks? Imagine a collection of sideshow performers handpicked by a modern day Ripley whose modus operandi is to cultivate a little bit of wonder, mystery and awe. Entertainment, education and some stray blood droplets may also be part of the equation at times. Some may even argue there’s a dash of exploitation. I, however, would disagree with that. He has assembled together a crew of weird performers who have packaged their talents, skills, and genetic abnormalities for our edification. The take-home message: Nature and humans are capable of some strange things. The Ripley behind the curtain is Todd Ray, a music producer with impressive credentials: Santana, Beastie Boys, Korn, and Cypress Hill. As a child “T-Ray” was always fascinated with the sideshows that traveled throughout the South. This fascination inspired him and his family to open up a permanent freakshow on the Venice Boardwalk located at 909 Ocean Front Walk. The museum is full of curiosities that he hopes will evoke the same wonder and fascination that he felt as a child when seeing the real sideshows. There is a two-headed chicken, a two-headed cow, a chupacabra, shrunken heads, strange mermaid-like creatures, and a live two-headed turtle. The Venice Freak show is very kid-friendly. The performance at the CIA, however, was not for small children. 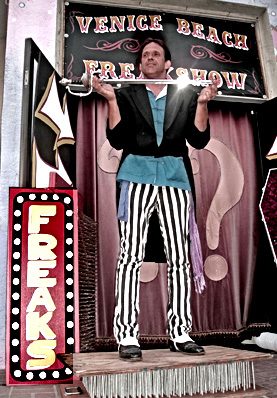 On the eve of April 11th, my faith in the existence of original, edgy and old-time themed performance gigs in Los Angeles had been restored. It was more than just showing up for a gig and grinding out a few dance tunes for a polite crowd. It was truly something out of the medicine show era. The audience was an interesting cross section representing the erudite to the gutter punk. Groups of teens and lovers of old-time music/history were there. One of my favorite audience types even attended: the curious. In one night, one of these curious audience members had the rare chance to see a living five-legged dog, Senor Stretchy Skin, the light bulb-eating Freak Prodigy, the sword-swallowing and fire-breathing Murrugun the Mystic, Pretzel Boy, the Human Gargoyle, the primitive old-time music stylings of Sausage Grinder, and an intense emotional glimpse of the Pain Proof Man.

As a performer and spectator, I experienced an array of emotions that still resonate. The two human oddities must be seen to be believed. The emotional fallout that lingers, however, is something you must be warned about. I will not describe those feelings or events here. You will have a chance to see these for yourselves when the Super Freaks assemble again. The antics of 19-year-old sideshow performer Brett Loudermilk aka Freak Prodigy are very entertaining and fast paced. He does amazing things with light bulbs and rubber chickens. The Human Gargoyle swallows his own tongue and Milo the Pretzel Boy bends his rubber body in thematic harmony with Senor Stretchy Skin’s flexible face flesh fun. Murrugun the Mystic swallowed swords as I sat stage right while performing parlor mandolin tunes with six-string god Christopher Berry. We couldn’t help look impressed as he swallowed sword after sword. During an attempt to swallow six swords simultaneously, he poked his esophagus. His face swelled up off stage as real blood flowed. My pink snakeskin shoes were even baptized in the blood of the inflicted sword swallower. I later found out that he was rushed to the ER. Last I heard he was operated on through the mouth and is scheduled to swallow steel for many more engagements. The show must always…