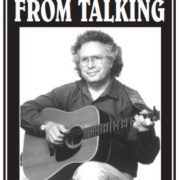 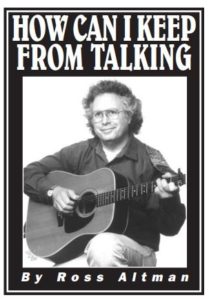 A folk singer is a storyteller with a guitar. His story bag is a wooden box with six strings stretched across it. Out of the sound hole come tales of good-hearted outlaws (“Pretty Boy Floyd”), sailors and sea-captains (“The Golden Vanity”), nostalgic gold miners (“Days of 49”), the Underground Railroad (“Follow the Drinking Gourd”), overworked and underpaid industrial workers (“The Preacher and the Slave”), heroes (“John Henry”) and heroines (“The Death of Mother Jones”), toil and trouble (“The Housewife’s Lament”), true love (“Barbara Allen”) and false hearts (“The Willow Tree”), tricksters (“Four Nights Drunk”) and the Devil (“Tying Knots in the Devil’s Tale”).

But there is a larger sense in which a folk singer is a storyteller with a guitar. Beyond the treasury of individual stories told in song, there are collective stories that have become identified with such great artists as Woody Guthrie, Leadbelly and Pete Seeger (all right, a storyteller with a banjo).

Woody Guthrie became known as “The Dustbowl Balladeer.” In his “Dustbowl Ballads,” a collection available on RCA Victor Records’ Legendary Performer series, Woody told the story of a whole generation of displaced migrant families from Oklahoma, Kansas, Arkansas and the Texas Panhandle who came to California in search of a job and a new life. He did in modern folk songs what John Steinbeck did in his novel The Grapes of Wrath, gave a voice to the voiceless, and a face to the hundreds of thousands of dispossessed Americans during the Great Depression. When “The Dustbowl Refugees,” “The Okies,” and “The Arkies,” as they came to be known, heard Woody’s familiar voice on the radio in Los Angeles, they knew he spoke for them:

And when he wrote his classic American anthem, “This Land Is Your Land,” at the tail end of the Great Depression, he was still speaking directly to his people and his audience—telling them that this land belonged to them too.

As Woody Guthrie told the story of the farmers and sharecroppers in the Midwest who saw their homes and lives blown away in the dust storms of 1935, so did Leadbelly, “The King of the 12-String Guitar,” tell the story of African-Americans facing the discrimination of Jim Crow laws in the mid-twentieth century south before the Civil Rights Movement dramatically changed the status quo of institutionalized racism and segregation:

Me and my wife went all over town
Everywhere we went the people turned us down
It’s a bourgeois town
I got the bourgeois blues
And I’m gonna spread the news around.

To “spread the news around,” that’s how Leadbelly described his art and his job as a folk singer. Like Woody Guthrie, he not only wrote new protest songs, but also infused new meaning into the old songs that kept alive the rich treasury of African-American folklore. These include the story of “The Grey Goose,” who survived the many attempts of a preacher hunter to kill him, of “John Henry,” the steel-driving man who challenged the steam drill of the industrial revolution to keep his job on the railroad, and the prisoners who waited for the train called “The Midnight Special” to shine its light on them so they might be paroled.

That modern railroad classic evoked a much older song of the Underground Railroad: “Shine on me…shine on me…let the light from the lighthouse shine on me.” Lighthouses were used as signal stations on the Underground Railroad, to let escaping slaves and their “conductors” like Harriet Tubman know whether a farm house would offer them sanctuary for the night. If the light was on they would be safe, if there was no light they would have to keep traveling. Thus light became a symbol of freedom in African-American spirituals: “I’ve got the light of freedom, and I’m gonna let it shine.” And thus, too, many songs that are not obviously “story songs” are in fact fragments of the great story Leadbelly told in his music, from sacred songs to secular blues, protest and children’s songs: the story of an oppressed people struggling to be free. The Grey Goose, John Henry, a prisoner waiting for a train, an escaped slave— they are characters all in Leadbelly’s story.

Woody Guthrie and Leadbelly were the two great influences on Pete Seeger, whose work with the Weavers in the early 1950’s sparked the folk music revival of the 1960s. Pete Seeger and the Weavers were able to translate the music of the rural south and Midwest into an urban folk idiom that made the songs of Leadbelly and Woody Guthrie a part of American popular music and opened the door for Bob Dylan, Joan Baez, Phil Ochs, Tom Paxton and many others who were their cultural heirs.

It didn’t happen without a fight, though, and that brings me to the third great story that came to be identified with the individual artistry of Pete Seeger. For in 1952, this World War Two veteran, “America’s Tuning Fork,” and “Johnny Appleseed with a banjo,” found himself in a dramatic confrontation with The House Committee on Un-American Activities which resulted in him being blacklisted for the following fifteen years, along with such other distinguished American artists as Arthur Miller and Lillian Hellman and, in Hollywood, a group of writers and directors known as “The Hollywood Ten.”

When Pete refused to name names before HUAC, and defended the first amendment to the Bill of Rights by saying he would not answer questions “which no American should be asked,” he became a hero to many others who were themselves struggling to resist the modern Salem witch trials of Senator Joseph McCarthy and the House Committee on Un-American Activities. For being what they called “an unfriendly witness,” Pete was sentenced to two years in prison, a sentence which was eventually overturned on appeal.

The damage was done, however. The Weavers, whose recording of Leadbelly’s classic song “Goodnight Irene” was number one on the Hit Parade for 17 weeks in 1950, were suddenly out of business and saw two years worth of bookings disappear overnight. Instead of performing at Carnegie Hall, Pete Seeger would take his long-neck 5-string banjo and 12-string guitar (to sing the songs of Leadbelly, who had died on December 6, 1949, without ever knowing that his theme song was soon to become the most popular song in America) into schools and summer camps across the country, and teach a new generation of children to love American folk songs and the stories they have to tell.

I was one of those kids, and thanks to Pete, and Leadbelly, and Woody, I became a folk singer too. But that’s another story.

Ross Altman has a PhD in Modern Literature from the State University of New York at Binghamton (1973); belongs to Local 47 (AFM); heads the Santa Monica Traditional Folk Music Club; writes for FolkWorks He can be reached by email: greygoosemusic@aol.com

You may not know, but FolkWorks started as a hardcopy newspaper in 2001. Two years later, in 2003 Ross Altman started writing for us. Every other month he wrote a column. In addition, he wrote CD, concert, movie reviews. If we saw something that we thought would spark his interest, we mention it to him and voila an article was produced. He loved the newspaper and protested when we stopped. Once we went “online” he realized the benefits…he no longer had a word limit constraint and he could reach a world wide audience. He became known for his writing on Bob Dylan. His articles were laced with political references, particularly the politics of the 1960s. If he sent us an article without a folk music reference, he would figure out a way to rewrite and tie it to folk music. All those old newspapers are preserved in PDF format and are available for perusing here. Ross’ first article was in Volume 3 Number 1. All his back columns are also available for re-reading.

It is with great sadness we announce that due to health issues, Ross is no longer able to write for us. He was proud of his writing and always told folks he met that he wrote for FolkWorks. We will dearly miss his conversations and contributions. Thanks Ross.

STORYTELLER WITH A GUITAR