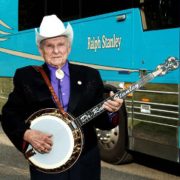 STORIES WE COULD TELL

If you are around music for long, you have music stories. Here are two. The names have been changed to protect the innocent, unless I forgot or want to name drop. I find if I am vague about the who, the greatly exaggerated what may be overlooked.

Ralph Stanley and the Jogging Suit

I know a gentleman who is not only a great musician and singer, but also a great songwriter. Bluegrass icon Ralph Stanley has recorded some of his songs, and he and Ralph are friends. About 25 years ago Ralph and the Clinch Mountain Boys were playing a few engagements in Southern California, and Ralph stayed at the songwriter’s home in the Inland Empire. The songwriter worked out regularly at a local gym, and he invited Ralph to join him. And to entice him to do so, he bought Ralph a then “stylish” purple, velour, jogging suit. If you are a Ralph Stanley fan, you have no doubt seen him photographed wearing workout clothing, but 25 years ago, you had not. If fact, you’d probably expect to see Mike Tyson playing hot five string banjo before you would dream that you would ever see Dr. Ralph in workout gear.

Ralph’s next gig was in South Orange County at Shade Tree Music on a Monday night. He obtained lodging near the beach.

At the Shade Tree gig, the songwriter told me about Ralph having stayed with him, the gym and Ralph’s new jogging suit.

At this time I was playing a Thursday night regular bluegrass gig (the last three words are seldom seen together) at a bar in Laguna Beach. I was doing the duo gig with a very good local sort-of-non-traditional banjo player/singer. As is usually the case, man cannot live by banjo alone so this gentlemen also worked doing landscaping. The Thursday night following Ralph’s Monday night gig at Shade Tree, we were setting up the equipment and the banjo player said “I saw the weirdest thing the other morning. I was on my way to work and I could have sworn I saw Ralph Stanley in a crosswalk on Pacific Coast Highway… and he was wearing a purple velour jogging suit.”

The Cost of Doing Business

I was recently chatting with a fellow songwriter while working on an unfinished song from 25 years ago, but that’s another story. We were talking about songs and my friend said that one lyric in one of my songs had always bothered him. The fact that anyone remembers my lyrics is a compliment, but I had to know where the friction lay. The song in question is about the sexual awakening of a hillbilly boy at a house of less than stellar repute. My friend felt that the services rendered should have been a greater amount than the two dollars I attributed to the transaction. The song’s setting is ambiguous but obviously rural and very likely in the somewhat distant past. But I have to admit that the dollar amount was based on syllable number, not experience or research.

I recently finished Sam Phillips: The Man Who Invented Rock’ N’ Roll by Peter Guralnick and it’s a highly recommended read. In the first part of the book, Guralnick discusses the early life of Phillips in Florence, Alabama. Phillips was a rich and captivating storyteller, and a frank one as well. In discussing where he learned his life lessons as a young man, he talks about his highly religious upbringing. But he also learned about business from Kate Nelson, who ran the local brothel. Although her business sense was admirable, she apparently had a softer side as well. In the discussion, Sam says “she felt so sorry for some young people that didn’t have two dollars, that most of them – I know I speak for myself – got a discount.” The emphasis is mine…

In the tar paper shanties that we called town

There weren’t much to do once the sun went down

And me just dreamin’ I could get away

Out on the outskirts down a red clay road

Stood a two story house that had never been a home

“Round Heeled Annie” was the owner’s name

And she made her livin’ in the oldest way

On the rainy, rainy night when I turned sixteen

With some applejack courage and a head full of steam

I took me a dare that some fool made

And I’ll remember that night ’til my dyin’ day

And if Pa ever did, he never let it show

Slippin’ and a slidin’ I did a go

Down to the end of the red clay road

Well it weren’t like nothin’ that I ever seen

But when her gown slipped down to that hardwood floor

She looked more like an angel than a two dollar whore

Now I’m not the kind to kiss and tell

And things went like they do just passably well

One thing that you got to understand

I made it on home in the drivin’ rain

Fightin’ the urge to go back again

Sneakin’ through the back door so Ma wouldn’t see

Well it’s been quite a spell since that fateful night

But hardly a single day goes by

That I don’t stop just to lighten’ my load

Thinkin’ ’bout the end of that red clay road

You all take care. Support live music, brick and mortar music stores and book stores, tip your wait staff, eat sensibly, ignore politics as much as possible without being an idiot about it, and remember you only get one real set of teeth.

STORIES WE COULD TELL