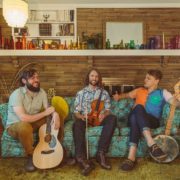 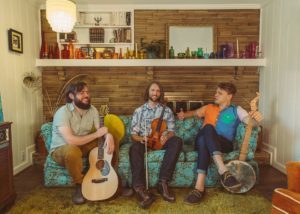 What happens when an American, an Australian, and a New Zealander form an old time music trio? You get Tall Poppy String Band. Cameron DeWhitt is an American clawhammer banjo player and host of the old time music podcast Get Up In The Cool. George Jackson is a New Zealand-born fiddler based in Nashville, Tennessee, and Mark Harris is an Australian-born guitarist based in Fort Collins, Colorado. All three musicians teach their respective instruments.

As a folklorist, I’m always intrigued by the conventions used for naming bands that play this music. Often groups playing together will use some iteration of the adjective, noun, noun formula (i.e. Smokey Valley Boys, Sunny Mountain Serenaders, etc.) So it’s easy to see why my ears perked up when I first heard the name “Tall Poppy String Band.” It followed the formula, but with its own spin. This is fitting given what Cameron DeWhitt, George Jackson, and Mark Harris are doing with their new musical project. My curiosity was whetted, and I met with the trio in early February via Zoom to find out more.

Understanding the unique and deeply interpersonal nature of the band, I had a question. Where did their name come from and how did it represent them?

“Tall Poppy Syndrome is a term that gets thrown around a lot in Australia and New Zealand, meaning people who stick out tend to be cut down to size by others, and so you internalize this and refrain from drawing attention to yourself. [This resonated] for us not only because of where George and I are from but also because of its similarity to the often knee-jerk policing that can happen in traditional music circles … The idea that as traditional musicians we should be self-effacing, and that it’s somehow in bad taste to draw attention to yourself,” Harris explains.

While the name did not come until the end of the album-making process, Tall Poppy String Band began when DeWhitt set about making a solo album during the pandemic. Feeling some artistic restlessness and a strong preference for playing with others versus playing by themself, Cameron contacted George and Mark about forming a trio, to which they heartily agreed. There was just one issue: these three had never been in the same room together, much less played together. However, Cameron and George knew each other and had played together, as had Cameron and Mark.

The as-yet unnamed trio’s work began. They convened for the first time in Nashville in August 2021. It was decided that they would spend a week rehearsing and then spend a few days recording. “We sat down and we’re like, well, let’s try and figure out what this band sounds like. Because we didn’t even know what our sound was. We were trying to create it and create an album all in the space of a week,” says Jackson.

One need only watch a video of the trio playing together to understand the magic that they’ve created. The trio got together at the 2021 International Bluegrass Music Association conference in Raleigh, North Carolina and recorded footage ahead of their album announcement, which would come a few short months later. As seen in their performance of “The Train That Carried My Man From Town,” they have a jaunty style that only comes from the playing of people who fit together like puzzle pieces – both personally and musically.

Riding the hills and valleys of a musical collaboration that defies genre and defines fun, listeners may easily forget the intentionality required to achieve the stunning balance Tall Poppy has achieved. So how do three people who have never played together thread that needle? By sharing the same musical inspirations, motivations, and priorities.

“We’re trying to find that perfect balance of our nerdiness and inherent fixation on the source recordings without trying to replicate them … That task is so hard to pull off. It’s so subjective, and people have such strong ideas about it.” says DeWhitt.

While this might not be obvious, I learned that the album tracklist is just another example of their deeply collaborative dynamic. Each member brought several tunes to the table. What they ended up with was a track selection perfectly representative of Mark, Cameron, and George’s musical repertoires and preferences. The result is a twelve-track album of “old time ragers, queer love songs, reimagined classics and spooky mood pieces.”

Once recorded, it was time to set about bringing the album to the world. Tall Poppy chose to use the rewards-based funding platform Kickstarter to finance the remainder of the project. Harris explains “the Kickstarter campaign is mainly to fund the post production … all the stuff that helps make it a really good and impactful release.”

DeWhitt emphasizes the importance to this campaign of an established listenership, and to the overall success of their debut album. “There are people who already know that they want it. Those are the people who are helping us herald the album to the rest of the world. Without their help, it would take a lot longer, and it would be a lot more modest in its release … So much music making is not music making, [but] that being said, we have some fun rewards planned that will bring music making back into the funding aspect.”

Just as it is a joy to listen to and watch this trio play music, it is also a pleasure to watch them interact. The fun they have together enhances the deeply collaborative and respectful nature of their overall style. I truly look forward to seeing this album make its way into the world, and to the future endeavors of Tall Poppy String Band.

You can visit their website here and find the full breakdown of funding usage and project backer rewards here.