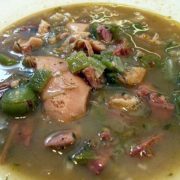 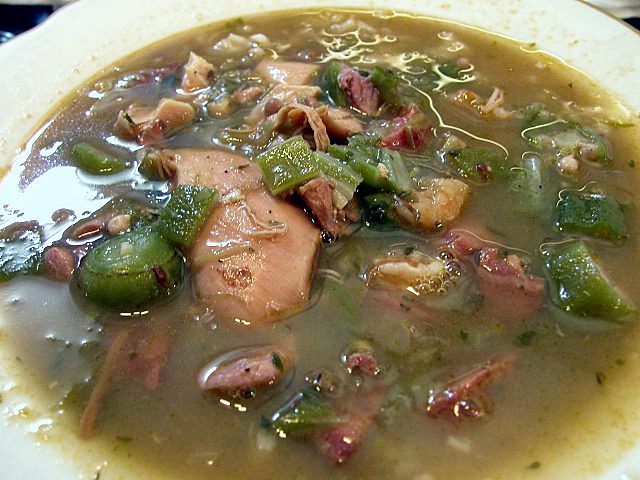 That miracle ingredient roux is at the core of gumbo. Roux has a very long history in French cuisine as a thickener and as a foundation for three of the five “mother sauces” which, in turn, serve as the base for virtually all sauces in contemporary European-derived cuisine. Cajun cooking takes roux to a whole different level from the delicate French sauces.

Roux is made by slowly cooking flour in fat until it reaches the desired color, but the main ingredient in roux is time. The traditional way is to heat the butter or oil on low-medium heat and then stir in the flour and continue stirring frequently to prevent the flour from burning or cooking unevenly. If any of the flour burns (indicated by black specks in the roux) then the roux is ruined. Roux is ready when the color is right. Cooking it in this way, a dark brown roux often used in gumbo can take up to an hour. Paul Prudhomme has his own accelerated version of making dark roux on high heat that he calls Cajun napalm. It takes an experienced eye, protective clothing and lots of courage this way and besides – what’s your hurry? There are even recipes to make roux in a microwave if you really can’t wait.

What do you get for the time it takes to make a roux the old-fashioned way? Expect to spend about 20 to 45 minutes stirring your roux. A cast iron pan and wooden spoon is preferred. I’ve heard it said that roux should take as much time as it takes to enjoy a good glass of wine. I don’t know if that’s true, but what better kitchen timer can you think of? You will want the roux to be anywhere from peanut-butter color to a dark red-brick color. This is going to add not only color but a distinctive flavor to your gumbo and, depending on the darkness of the roux, varying degrees of thickening.

It is really worthwhile to develop your preferred method of making roux because it has many uses beyond Louisiana cooking. I find a dark roux to be a perfect base for stew and chile as well. There is no fixed recipe for roux. I find a majority of commentators prefer a 1:1 proportion of fat to flour though many recipes have as much as 3:1 fat to flour and every proportion in between.

The darker your roux, the less thickening power it will have. So if you go with a red brick roux you will need to consider additional thickening agents. For gumbo, the thickening is enhanced with either okra or filé powder; but filé and okra are never used together in the same dish.

You are not likely to find fresh okra in February. That’s OK, I have nothing against frozen okra for stews or gumbo. Filé is your alternative thickener but a few things need to be clarified about filé powder: Filé powder is dried and ground from sassafras leaves only. Sassafras oil from the bark of the sassafras tree contains a carcinogen “safrole” but there is no safrole in the sassafras leaves, so don’t be afraid of filé powder. Another caution is that filé powder should only be added after the stew or gumbo is removed from the fire. It is a very powerful thickening agent and should not be boiled or excessively heated. Filé was used by the Choctaw Indians of Louisiana long before Europeans arrived, so it has a long culinary tradition in the Southeast.

Once you have your roux and you’ve decided on okra or filé for thickening, the difficult part is over. Now you are ready to make your gumbo. Gumbo is sometimes considered a Cajun version of bouillabaisse, but it has many more varieties and is not limited to fish as the main ingredient. Of course you need a flavor base of onion, celery, green peppers and garlic. You can add broth or water. I prefer going with water because there are plenty of flavors already in the pot. If you are going to make your gumbo with meats such as sausage, ham, chicken or turkey you will want to start with a darker roux. You will also want to brown your meats before adding them into the gumbo. On the other hand, a seafood gumbo with shrimp, crab, crawfish, oysters, white and/or red fish should start with a lighter roux.

Now comes the next controversial part: rice. On a common-sense level, rice is a fine accompaniment. Serve your gumbo on top of rice, it will soak up the liquid, fill out the dish and make a very satisfying meal. But I prefer to keep the rice for Jambalaya – a true rice-based dish.

Jambalaya usually does not begin with a roux. In this case you are going to cook your ingredients – onion, celery, green pepper, garlic, and meats or fish – together with the rice. Tomatoes are optional. These days you are likely to find restaurants serving “jambalaya” on pasta instead of rice. No problem, it tastes good that way but jambalaya is originally a rice dish. I have yet to see paella served on pasta.

Less well-known than gumbo and jambalaya is a delightful Cajun dish called étouffée (from the French word meaning “smothered”). Like gumbo, étouffée starts with a roux, is usually made with either crawfish or shrimp – though there is no law against using chicken or other meats – and uses much less liquid than gumbo. This is not a soup. Once the roux is ready – and for seafood, you will want a relatively light roux – you add the vegetable base of onion, celery, green pepper and garlic, then sufficient water to make a thick sauce. Étouffée is traditionally served on top of rice, but unlike jambalaya, the rice is cooked separately and the sauce is thicker, not from filé or okra but just because less liquid is used.

As you can see, I’m not that much concerned about recipes. I prefer cooking to be spontaneous and inventive. That being said, I highly recommend a cook book of sorts if you want to delve deeper into the riches of Cajun food. Marcelle Bienvenu’s “Who’s Your Mama, Are You Catholic, and Can You Make a Roux?” is a wonderful journey through Cajun country with stories of Bienvenu growing up around St. Martinville and how this tradition of cooking was so intimately a part of life.

Be sure to end your Mardi Gras feast with a traditional Cajun desert of bread pudding with whiskey sauce. Bread Pudding recipes are everywhere – but here’s Marcelle’s whiskey sauce: over a double-boiler melt a half stick of butter, whisk in a half cup of sugar, add four beaten egg yolks in a stream while whisking constantly. Remove from the heat and add the whiskey.

When not dining in exotic locales, Michael Macheret forages closer to home in the South Bay regions near Los Angeles

SOME FOOD TIPS FOR MARDI GRAS