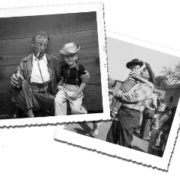 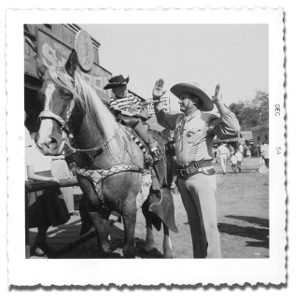 As a small child I was fascinated by a tiny box in our living room called a television. The thirteen inch screen was just my size, and I had to be continually warned not to sit too close or I’d go blind. I had to start wearing glasses in third grade and my parents gave me that “I told you so” look. After that I sat far away from the set in an attempt to reverse the damage. So far I haven’t seen much confirmation of that theory.

Although cartoons were number one on my TV hit parade with cowboy movies running a close second, I was also enamored and intrigued by music on television. I was most impressed by a show called Town Hall Party. This was a “barn dance” type show with a house band and regular performers who were joined each week by touring “name” acts. A portion of the Saturday night show was aired live. I can still recall how certain performers such as Lefty Frizell could somehow impact my emotions. Certain songs ran chills up my spine. And the group of local performers always seemed to be happy and enjoy each other and what they were doing. Among the regulars were Tex Ritter, Rose Lee, and Joe Maphis, Merle Travis, and my favorites, the Collins Kids. Larry was a kid and cool and Lorrie was a pretty young lady who was on the Ozzie and Harriet TV show a few times when she was dating Ricky Nelson.

Hollywood often used the areas just outside of Los Angeles for filming. In the then wilds of what is now Santa Clarita an enterprising actor built a western town named after himself: Corriganville. Ray “Crash” Corrigan had make his fame primarily in B westerns and as Flash Gordon in a number of serials. He had a memorable screen presence; unassuming, relaxed and casual. Somehow those qualities were reflected in Corriganville. Though filming was the mainstay, Corrigan broadened the appeal by creating a theme park before the label existed. Along with the old western town, there were pony rides, souvenirs, food concessions, numerous photo ops and live music. On Sundays the stage at Corriganville was often filled with many of the very same players who had graced the glorious shiny television the night before on Town Hall Party. A few hours’ sleep and on to more music. They no longer were confined to a black and white world in a box, but in full life color. 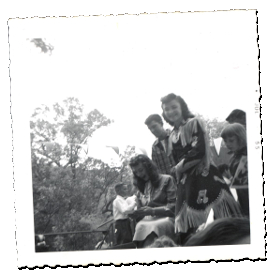 Dennis and Lorrie Collins (left) and Rose Lee Maphis (right) at a signing.

I know you’re thinking “My god, look at he did that, tying those seemingly disparate threads into one thing of beauty.” Or something like that.

So amazed or not at that magic transformation from small screen, I remained transfixed by the music. Certain instruments, like the fiddle being masterfully played by the sultry Fiddlin’ Kate, jumped out more than on the high fidelity 3 inch TV speaker in our living room. The same sense of the performers enjoying themselves and maybe extending themselves that reigned over the TV show was even more evident on the live stage at Corriganville. A lively chorus might be bolstered by harmony vocals from the next act racing on stage to sing along, or one of the instrumentalists switching instruments to more appropriately grace the singer and the song.

Dennis with Quincy Snodgrass (left) and with Max Terhune (right)

Along with enjoying a picnic with family, I also partook of the various experiences Corriganville provided. Pony rides were de rigueur, which is French and means I’d cry a lot if I was denied. I was also the focal point of 3.4 million photos taken by my grandfather and my parents. Shots of me at the age of 4 or 5 clowning with Quincy Snodgrass, with me wearing his funny hat. Or Rose Lee Maphis and Lorrie Collins signing autographs. My favorite photos featured me, felt cowboy hat and toy revolver, holding Crash Corrigan at gunpoint. Or one of me being held by Max Terhune, one of Corrigan’s favorite sidekick co-stars. In the old movies he was armed with a ventriloquist dummy, which had disturbed me on television and did more so in person. Luckily Elmer was off duty the days we were there.

These photos and memories were stored way in the good file. It seemed like the area was semi deserted in my mind and in the photos. The live music was attended by tens of people, not hundreds. Or so I remembered.

The advent of the internet and a bit of digging showed that my experiences were anything but unique. Thousands (alright, tens of thousands) of little girls and boys had their picture taken with a gun on Crash, perhaps snapped on a Brownie by their grandfather. In retrospect, I wonder how Corrigan and Therhune’s backs held up to all of us young western stars doing our best Rex Allen or Johnnie Mack Brown expression into the camera while hoisted off the ground. At the age of 4 or 5, those are tough impressions to pull off.

Kids and adults enjoyed the music and used it as the pivotal point of their journey to the old west, the new west and a lot of good music. Corriganville went the way of all things past. Thank me for not evoking some tumbleweed imagery there.

So seek out live music. Maybe pack a picnic and go for a pony ride, too. Sha la la la la la live for today.