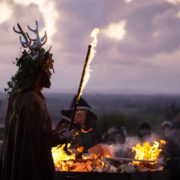 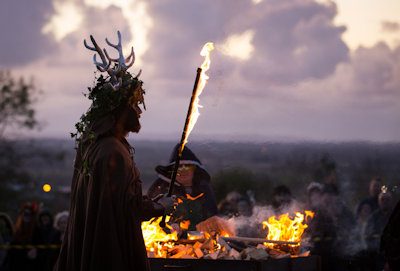 The ghostly holiday of Halloween can trace its roots back to Samhain (pronounced SOW-en), an ancient Celtic holiday that began well over 2000 years ago. Samhain was not only a celebration of the end of the annual harvest and the beginning of winter; it was also believed to be a time when there was only a thin barrier between the world of the dead and that of the living. More information about the many Samhain myths and traditions may be found here.

As with other pagan festivals (such as Yule), Christians eventually co-opted Samhain. Pope Boniface first attempted to move it to May 13 in the 5th Century, also declaring it as a time to celebrate saints and martyrs. However, this did not stop the celebration of Samhain in the fall. 400 years later Pope Gregory declared November 1, the day following Samhain as All Saints Day and November 2 as All Souls Day. This is why October 31 became known as “All Hallows Eve” or, as we call it now, Halloween. We can thank the Irish immigrants of the 19th century for bringing the traditions to the U.S.

But what would a festival be without music? Orange County organist/composer/vocalist Kristen Lawrence has numerous recordings of “Halloween Carols™” (a term she has trademarked) for Samhain as well as for more contemporary Halloween celebrations.  Her albums bear titles such as “Hallowe’en: Night of Spirits,” “The Raven”, and my personal favorite “Broom with a View.”

Here is “Vampire Empire” from “Broom with a View”:

Here is her version of the traditional Samhain “Souling Song”:

You can learn more about Kristin Lawrence on her website.

Though her music is well known around the world, Loreena is also known for her philanthropic work. In 1998 after her partner and two other good friends drowned in a boating accident, she established The Cook-Rees Memorial Fund for Water Search and Safety. Other charitable foundations she has established in Canada include the Three Oaks Foundation, supporting cultural, environmental, historical, and social groups as well as the Falstaff Family Centre that supports families and children in need in Perth County, Ontario where she currently resides. Her website may be found here.

Looking for a way to celebrate Samhain in the greater Los Angeles area? Celtic musician Aedan McDonnel produces an annual Samhain show, this year at the Hudson Theatre in Hollywood. The show tells the ghostly stories of Samhain with an extremely talented cast of Celtic musicians and dancers. Performances will take place on October 20 and 27 with both matinees and evening performances on each of these dates. For a taste of what the show is like, here is a video:

Tickets are available on the Celtic Rhythms website but do purchase them as soon as possible as these shows have sold out in the past and have become more popular each year.