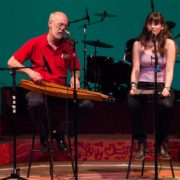 FROM CLOCK RADIO TO MOUNTAIN DULCIMER

Nancy Barker, who runs Kentucky Music Week, a mega one week dulcimer festival in Bardstown, Kentucky, sent me an email with the link: a mountain dulcimer arrangement of She’s Always A Woman by Billy Joel.

My mind was blown, and I wrote Nancy, “Who is this guy?” After contacting him through Facebook, I spoke with him and discovered his road to dulcimer innovation…

Sam’s path to the mountain dulcimer (MD) included a clock radio, the hammer dulcimer (HD) and the folk festivals of the 1970s.

Sam grew up in New Jersey singing in his school choruses, listening to the complexities and layers of the full accompanied sound of his parents’ set of Beethoven Symphonies, his father’s occasional renditions of Red River Valley on a cheap nylon string guitar in the 1960s, and five years of seemingly irrelevant piano lessons that did, however, give him an understanding of chord progressions.

His musical epiphany came at age 13 when he received a clock radio/cassette player for his birthday. The world of American Top 40, music of the 1950s and ‘60s, Carole King, Chuck Berry, Elvis, oldies and country music flowed out of that radio like an open faucet. He listened, learned, imitated, transcribed, and made up his own songs on that funky nylon string guitar.

At 15 he saved up and bought himself a steel string guitar. He experimented with all kinds of music. One day he was playing The Last Thing on My Mind and realized he was Travis picking. To improve his fingerpicking, he got a banjo and learned bluegrass style fingerpicking. Because, as you’ll find out from this interview: Sam is a learning machine! All that practice paid off ten years later in his version of Foggy Mountain Breakdown.

A folkie friend convinced Sam to go to his first folk festival, and later introduced him to folk coffeehouses and organizations like The Folk Project. At these, he learned to accompany musicians (on guitar) with fingerpicking, harmonies, fills and fancy chords.

At one of these festivals he heard Dorothy Carter play French Troubadour songs on the hammer dulcimer (HD). He was mesmerized by the instrument and sought out more players. During his college years, he met an Ithaca, NY, hammer dulcimer player named Nick Krukovsky, who was playing Sousa and Scott Joplin when everybody else was playing jigs and reels.

In college, Sam dove into the Philadelphia folk music scene. One of his Philadelphia friends was Doug Berch who played both mountain and hammer dulcimer. Doug convinced Sam to go to his first dulcimer festival in Cosby, TN. On their way there they stopped in Winchester, VA and picked up Madeline MacNeil and David Schnaufer. Now Doug, Maddie and David are now legendary mountain dulcimer players. Despite this awesome introduction to the MD, his early impression of the mountain dulcimer was that it seemed simple, not very exciting. 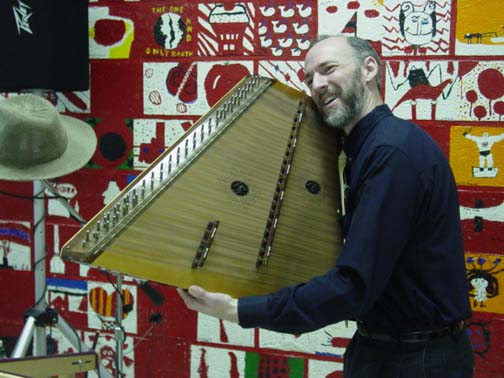 A decade later, Sam finally got his own hammer dulcimer and soon began to integrate his diverse musical skills and sensibilities into unique, multi-layered arrangements of tunes like Colour My World by Chicago, the March of the Siamese Children from the King and I, and even a Mozart piano sonata.

In the 1990s he became a regular attendee and sometime teacher at the Cranberry Dulcimer and Autoharp Gathering. After moving further east to Connecticut, he discovered the Housatonis Dulcimer Celebration, which he attended as an HD player. Still no interest in the MD.

In 2003, Thomasina Levy, Rob Brereton, (once again, now very influential MD players) and friends decided to stop doing Housatonic after 10 great years. Sam and a few other people couldn’t picture Connecticut without a dulcimer festival, so they founded the Nutmeg Dulcimer Festival, with Sam as the chair. As chair, Sam felt he should get acquainted with the other kind of dulcimer.

So Sam bought his first serious mountain dulcimer from Ron Ewing (an exceptional and extremely well thought of innovative mountain dulcimer maker from Ohio). It had a 1+ fret (which allows you to get minor 3rds in the most common major open tuning DAD). Soon he was playing songs like Mellow Yellow by Donovan and Bang a Gon” by T Rex: not your typical dulcimer tunes.

He discovered the following:

A guitar has 6 strings and we have 5 fingers.

A dulcimer has 3 strings and we have 5 fingers.

The player has the power!

Before long he developed his style of doing as much as he could on each of his 3 strings. Having no objection to added frets, he soon added the 0+ fret as well. Sam’s usual dulcimer set up is 3 strings, tuned DAD, with 0+, 1+, and 8+ frets, and if that doesn’t suffice for a song, he’ll go to a fully chromatic dulcimer. He was well on his way to developing his repertoire of soft and hard rock, Brazilian Jazz, Appalachian, Bluegrass, opera, Beatles and more.

Within a few years he was teaching MD locally at the Nutmeg, Cranberry, Albany, Pocono and Folk Project Festivals. He has his own YouTube Channel to spread dulcimer music.

At the 4th Nutmeg Festival, Robert Force, a premier innovative west coast MD player was an instructor. Robert brought a prototype of an electric dulcimer that he was designing with builder Rod Matheson. Sam loved it and had to order one. He started experimenting with effect pedals from the local music store: distortion, auto wah, sitar, blues driver and organ pedals. 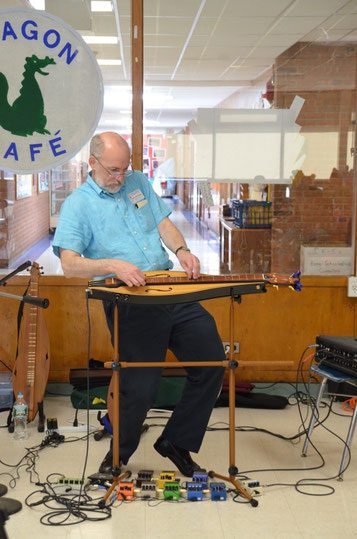 In mid 2014, Sam’s electric dulcimer video of Whole Lotta Lov” by Led Zeppelin, went viral on YouTube. A DJ in NY picked it up and it went around the world. It put him in touch with fascinating musicians in the US and abroad, as well as old friends from his youth. The current count is over 240,000 views, in 188 countries. That was such a rush that he put up Psycho Killer and the NY DJ shared that too.

Sam, the showman, also does a version of Pinball Wizard and wears a blindfold to make it more authentic and really dazzle the audience!

Sam will be at the Kentucky Music Week this summer, June 26 to July 1st. I’m looking forward to meeting him in person since I’ll be teaching MD there too. 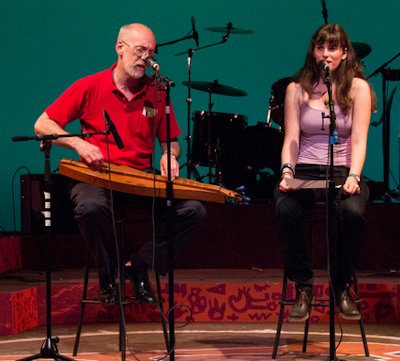 Sam’s mission is to show people that the dulcimer is the “world’s coolest musical instrument and that it deserves to be known by the general public.” His mission is to “reach out the public so they become acquainted with the dulcimer”. Sam has certainly done that and expanded the dulcimer’s capabilities and personalities.

I look forward to watching the creative outpourings of his unique talent over the next years. So many musicians have expanded the dulcimer’s personality between the time it was invented in the Southern Appalachian mountains to today. With his complex layered arrangements of so many genres of music for the dulcimer, Sam has added a huge chapter to the development of the mountain dulcimer as a versatile and ever growing musical American folk instrument.

A true creative maverick in the mountain dulcimer world, Joellen Lapidus  both embraces the deep rich traditions of the Appalachian Mountain Dulcimer,  and  creates new traditions.  One of the pioneers of an equally rich California Mountain Dulcimer tradition, her rhythmic playing style and elegant shapes and inlaid dulcimers have influenced generations of players and builders. Joellen teaches at McCabes Guitar Shop and dulcimer festivals from coast to coast. (this last sentence is optional, depending on how much room you have.) www.lapidusmusic.com