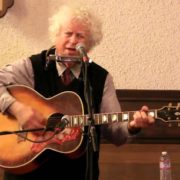 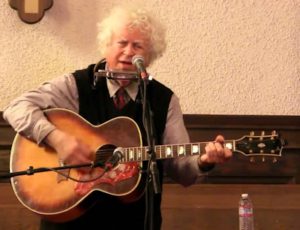 Naming names was the ritual act of expiation required of those seeking to save their careers during the McCarthy era blacklist by incriminating their friends and political associates before the House Committee on un-American Activities. To refuse to name names was tantamount to confessing that yes, you were a communist yourself, and subjected you to contempt before the Committee, and to being blacklisted as an unfriendly witness so that you could no longer work in Hollywood (the fate of the Hollywood Ten).

But not only in Hollywood. The blacklist included many others both inside and outside of the entertainment industry, such as the late great Pete Seeger and The Weavers in folk music, John Henry Faulk in radio broadcasting, and Arthur Miller and Lillian Hellman in theatre. It included teachers, union organizers, and even lawyers, such as my own father, George T. Altman, who lost all of his clients but for a used car salesman when he refused to cooperate with HUAC in 1952. He came to the attention of HUAC by representing the First Unitarian Church in a case against the IRS, by representing Ben Dobbs, a known communist, and by defending Rose Chernin of The Committee for the Protection of the Foreign Born.

It was for my father that I wrote the song Papa Had to Start All Over. But it tells the story as well of an entire generation of old leftists who challenged the authority of the government to regulate political beliefs and associations. They were the vanguard of the 1960s, who spoke truth to power long before it became fashionable to do so and who did so at great personal cost to themselves and their families. So Long As One Man Is Free is my first Centennial tribute to Pete Seeger, Pete Seeger’s Long-Neck Banjo my second.

If you were loyal to your friends, or even to your own political ideals, which often—let’s face it—included communism as a kind of secular religion, then you were seen as a traitor to your government and by extension your country, despite the fact that most of these old leftists worshipped many American heroes such as Abraham Lincoln and Tom Paine who had considerable mainstream appeal. Tall, Dark and Ugly and Tom Paine’s Shoulders, as well as my secular hymn, That Old Left Religion all pay tribute to them.

When the Old Left Met the New tells the story of the HUAC hearings in San Francisco when they took their show on the road in May of 1960 and came out to California to investigate teachers at a number of colleges. If you want to trace the emergence of The New Left to a single event, it would be the extraordinary occurrence of what came to be known as Black Friday, May Day 1960, on which the San Francisco fire department washed a small turnout of students who were sympathetic to their professor’s plight down the stairs of the City Hall Rotunda. The next day 3000 more students came out to protest the fire department’s actions, and were described by one reporter as “an entire generation that nobody knew was there.”

In short, HUAC and the fire department did more to radicalize students than a hundred Marxist professors in their wildest utopian dreams could have accomplished. The future of Berkeley as the center of The Free Speech Movement four years later was foretold on that balmy spring morning. My song for Mario Savio, Mario, celebrates its fruition in the fall of 1964.

For me, the high-water mark of the young New Left, before it took a violent nose dive into the ideological tailspin of The Weathermen, took place the following year, on November 27, 1965, when SDS president Carl Oglesby spoke out against the Vietnam War in Washington, D.C., in a speech sometimes entitled, “Let Us Shape the Future,” and other times, “Trapped In a System.” I pay tribute to Carl in the song, Old Fighter—who passed away September 13, 2011.

We Had All the Good Songs summarizes both the well-documented failures and the lasting impact and hold on the imagination of the Old Left, of whom Tom Lehrer memorably said, “They may have won all the battles, but we had all the good songs.” I shamelessly stole his line and put it in my broadside ballad. Thank you, Tom.

The Ballad of Sunset Hall is a late addition to the lore of the Old Left, written in 1989 when an LA retirement home for “ageless radicals” was about to close and its historic building sold to real estate developers, while its residents were to be farmed out to various nondescript old folks homes. One of those residents was Waldemar Hille, former music director of The First Unitarian Church, who himself had been blacklisted in the 1950s and who had become a friend of mine when I moved back to Los Angeles to become a folk singer at the end of 1979. Wally was the first man to notate the songs of Woody Guthrie for People’s Songs in 1948, and was still a vital and wonderful creative presence when I met him in the early 1980s. For Wally to lose his home was unacceptable to me and I protested in the most effective way I could, by writing the song for him and his fellow residents. As a result of writing the song I became friends with the lawyers who managed to save Sunset Hall, Jan Goodman and Jerry Manpearl.

God knows the Old Left, and the New Left too, made their share of mistakes, but what they contributed to the American history of resistance to unjust laws and unjust wars and to advance social progress on many fronts is undeniable except by those with spiritual rigor mortis. Because of my long association with the left in too many causes to name, I feel honor bound to speak up for those in present day communist countries, especially Red China, who are now fighting for democracy and the rights that we in America feel are part of our birthright, such as freedom of speech, the press, assembly, and due process of law. I don’t hesitate to criticize my own government, as those who have my previous CDs and tapes are well aware, so Tiananmen Square makes clear that I am no more sympathetic to government oppression there than here. As I.F. Stone once wrote, “All governments lie.” This coming June 4 marks the 30th anniversary of Tiananmen.

Finally, Dosvedanya Anya, about the murder of Russian journalist Anna Politkovskaya, makes the same point in the context of Putin’s Russia and last in terms of Putin’s Puppet.

Freedom is a long time coming.

Ross Altman has a PhD in Modern Lit. He may be reached at greygoosemusic@aol.com