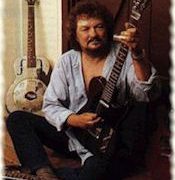 Delaney was born in Pontotoc, Mississippi. After a stint in the Navy, he relocated to Los Angeles and sought employment in the music business. Eventually Delaney landed a job in a band called Red Rhodes and the Detours Featuring Gene Davis, and along with that, the ability to perform on Cal’s show. Red Rhodes was a stellar pedal steel guitarist who went on to play with post-Monkees Mike Nesmith. Delaney played rhythm guitar and came up to the mike to sing a few songs throughout the band’s set, but was essentially understudy to lead vocalist/emcee genial Gene Davis. Delaney often sang Elvis Presley songs. During this time, country legend Cliffie Stone noted that Delaney frequented country recording sessions “soaking everything up.”

My dad became a Delaney Bramlett fan from seeing Delaney on Cal’s show. So it was my dad who noticed that a guy who looked a lot like Delaney was playing in a band called the Shindogs, the house band on ABC’s Shindig! This was a national primetime pop music television program. And eventually Delaney got to sing a few songs on Shindig! His star was rising. Delaney tried hard to make his name known. He recorded a number of singles for small Los Angeles labels. Several featured a faux British accent.

Things changed in the music business, and Delaney found himself playing a lot of the same LA clubs as Leon Russell, J.J. Cale and other southern expatriates. He eventually met and married Bonnie Lynn after a whirlwind courtship, and she became his singing partner in a loose aggregation of musicians called Delaney & Bonnie & Friends. Bonnie and Delaney’s premier recording was released on Stax Records, and the group went on to success with several songs that have entered the canon of rock standards: Superstar (yes, the song that Karen Carpenter recorded) and Never Ending Song of Love. Major talents such as Eric Clapton, Jimi Hendrix, George Harrison and Dave Mason spent time with this evolving, revolving line-up. They famously lost 98% of their band to Joe Cocker’s “Mad Dogs and Englishmen” tour.

After their musical and marital divorce, Bonnie continued singing with a variety of groups, and also did a number of acting roles. Their daughter Bekka became a singer, holding a spot in one of the 1990s Fleetwood Mac lineups. Delaney recorded occasionally, but never really found major commercial success again. He was provided a living primarily based on revenue from his songs, and seemed truly flattered that so many artists revered his songs enough to record them. In December of 2008, he passed away from complications from gall bladder surgery.

What made Delaney a great musician? A lot had to do with his ability to blend country, blues, soul and rock into one seamless style of music. His energy seemed boundless, and he acted as a catalyst in many musician’s careers. Delaney gave George Harrison his first slide, and showed him a bit about slide guitar. Eric Clapton states that Delaney taught him to really sing, even though he had recorded many vocals prior to meeting Delaney. Bramlett produced Clapton’s initial solo record, and Clapton’s singing sound uncannily like Delaney’s on several of the songs. On songs where Delaney sings with Clapton, it sometimes seems impossible to recognize the singer.

Delaney’s voice was truly special. He had the ability to jump to falsetto and then back to his “regular” voice within one held note. His ability to sing “black” without sounding like a parody reminds one of Sam Phillips search for a white singer with black sensitivity that resulted in Elvis Presley’s career. Delaney’s love and understanding of the southern blues coupled with his country roots added to the soul and rock music of the day made for compelling, energy filled performance, and the strong gospel influence was often exploited accordingly.

Delaney was able to take this sensibility and produce other artists. He produced sessions with Etta James, John Hammond, Elvin Bishop, King Curtis and the Staple Singers. Delaney also served as a short term member of John Lennon’s Plastic Ono Band. He was a long time friend of Jerry Lee Lewis, and did a duet on one of Jerry’s recent recordings. He found a musical compatriot in Duane Allman. In famed record producer Jerry Wexler’s autobiography, he mentions that the best music he ever heard was Allman and Bramlett jamming on Robert Johnson and Jimmie Rodgers’ tunes on Wexler’s back porch. Delaney’s songs have been recorded and performed by Ray Charles, The Carpenters, the Everly Brothers, Usher and even Lawrence Welk, who once used Never Ending Song of Love as a TV show opener.

Most of all, Delaney Bramlett was a catalyst. Without Delaney, there would have been no Derek & the Dominos, no Mad Dogs and Englishmen band to tour with Joe Cocker. Delaney brought blues, gospel, soul and country into pop music. Delaney often said “Those are the kinds of music I burned my lips on,” His approach and love for music pulled major talents to him, quite complacent at complimenting Delaney’s music rather than fronting the stage. Delaney had a love for music so deep, so joy filled, that one could not help be moved by the man’s talent.

If you go to youtube.com you can find a good number of Delaney’s performances from the good old days, but I think my favorite is a segment from 2002 at Kulak’s Woodshed. With minimal accompaniment, Delaney sings Booker T Jones Everybody Loves a Winner with 120% effort and 150% soul. Just guitar, bass, drums and harmony vocals. The lyrics follow the path of a man who knows fame and the trappings, and falls from grace and loses it all. Delaney even pulls off a gritty guitar solo, but mostly sings like a man possessed… with a love for music. A fitting eulogy for a fallen comrade in song.

Go listen to some live music, and tip the waitress and the musicians. Smile.