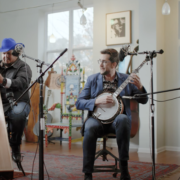 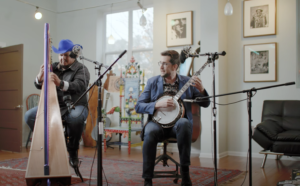 Sometimes you come across a band or an artist that never ever fails to get you right in the guts. I don’t know how to explain it, but I think y’all know what I mean. It’s like they have a Midas touch, but for what your soul needs. That is what multi-genre North Carolina artist Joe Troop is to me. I couldn’t be more thankful to have come across his music.

To be both honest and frank, I didn’t know who he was a few years ago. I was a Global Studies major at UNC-Chapel Hill just dipping my toes into a longstanding interest in traditional music, an interest that had been living on my mental back burner. Initially, I was doing this through artists who fell more squarely in southern United States’ old time music and ballad traditions. Thanks to the siren call of Free Dirt Records’ entire catalog, I discovered Joe’s work. Beyond an instant attraction to the music and lyrics, I was immediately taken with three themes in his work: sharp and pointed criticism of injustice, undying hope in the face of that injustice, and lifting up the stories of others as much as (if not far more than) his own.

Last year, he appeared in my top five most-listened-to artists twice, thanks to his solo work, his Latingrass supergroup Che Apalache, and other musical collaborations such as those with Diego Sanchez (listen to Free Dirt Records’ “Joe Troop: Complete” playlist here). It’s been an amazing journey and I look forward to many more hours spent listening to this guy make music and bravely do good in this dark world.

That being said, I’ve also discovered many other amazing artists and styles of music by way of the multicultural and intra-genre musical meetings that occur so often in Troop’s work. Fellow Che Apalache members Pau Barjau, Franco Martino, and Martin Bobrik are all talented musicians who fit together like puzzle pieces. Diego Sanchez, who collaborated with Troop on projects “Cheap Sacred Texts and Microwaves” and “A Traveler’s Sketches,” is another singular musician I might not otherwise have known about. He’s also helped create another special project in his recent quartet with Omar Ruiz-Lopez, Ramon Garcia, and Brevan Hampden, three more musicians previously unknown to me. And through other collaborations, I’ve come to further appreciate artists I already knew and loved. “Borrowed Time,” his solo album produced by himself and Jason Richmond, is jam-packed with a dream team of artists such as Tim O’Brien, Bela Fleck, Abigail Washburn, Nokosee Fields, Trey Boudreaux, and more.

Recently, Joe has been performing with powerhouse Venezuelan multi-instrumentalist and vocalist, Larry Bellorín. Currently based in Raleigh, North Carolina, Larry was born in Monagas, Venezuela. Since childhood, Larry has focussed on developing prowess as a player of cuatro, harp, bass, mandolin, and percussive instruments such as the maracas. During his time in his home country, he did everything he could to pass on and promote the music he knows and loves, even serving as the president of a musical foundation. Forced into exile by conditions beyond his control, Larry pursued asylum in North Carolina, where Troop eventually sought him out.

I recently got to see Joe and Larry perform in one of their first-ever public shows together, which took place at the Cork and Keg in downtown Asheville, North Carolina. While I was of course excited to hear a couple of favorites from Joe, such as “Red, White, and Blues,” it was the pieces I had not heard before which completely stole the show. Larry and Joe bring out the best in each others’ many musical talents.

As plainly evidenced by both his solo pieces and the pieces performed with Troop, Bellorín is a treasure and an impeccable talent. His passion and sincerity shine through in every note he plays and every word he sings. I feel blessed to have seen him perform and I hope to do so again soon. If you haven’t already done so, I encourage you to check out this living legend of llanera music. You can find a number of Larry’s works on YouTube.

Through April, Joe and Larry are performing a residency at The Fruit in Durham, North Carolina. Bringing on guest musicians such as Sophia Enriquez, Charlie Hunter, and more, this residency has provided this versatile duo the opportunity to showcase the particular brand of magic that happens when artists from a variety of struggles and backgrounds meet at a multi-genre crossroads. You can view The Fruit’s events calendar here.

This residency is far from the end of the line for Joe and Larry. In addition to a gorgeous music video for the Venezuelan folk song “Caballo Viejo,” originally penned by Simón Díaz, the duo announced at their Asheville show that they will be putting out a record for Music Maker Relief Foundation, the legendary Hillsborough, NC based organization which “tends the roots of American music by supporting the artists who make it.” You can visit MMRF’s website here.

It is my belief that music is one of the most powerful and effective buoys for hope. It is also my belief that no one is doing this better than these two artists. They work together to weave a sonic tapestry that foretells a different future for our world, one of unity, love, prosperity, and mutual respect.

You can follow their work on their social media channels, by visiting Joe’s website, and by signing up for his email newsletter.