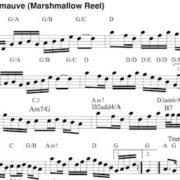 A QUEBECOIS REEL FROM THE PLAYING OF ANDRÉ BRUNET

We recently had some friends over to jam and one of them is a big fan of Quebecois music, so eventually the music turned French Canadian. I don’t know too many French Canadian tunes myself, just a few that seem to work well for jams. My favorite is La Grande Chaine (also known as Glise à Sherbrooke, Reel de Tadoussac, and many others), which the Scottish Fiddlers of Los Angeles have used as a concert finale. This column is about a different G reel, Reel de la Guimauve, which I learned from the playing of André Brunet. It is a bit harder than La Grande Chaine, but also has a recurrent phrase that people can latch onto quickly. That is important when trying tunes in sessions because complicated tunes without quickly identifiable phrases are jam busters.

André Brunet is a very energetic and entertaining performer and his band De Temps Antan is fantastic. Timing and finances are unlikely to ever work out, but I hope to get them some time for the Topanga Banjo Fiddle Contest. You are more likely to find them touring in Europe than in the US. The last time they played in  Los Angeles was in August, 2012 at the Skirball Cultural Center. André Brunet also tours with the Celtic Fiddle Festival. That group was originally founded in 1993 by the late Johnny Cunningham (of Silly Wizard) of Scotland, Kevin Burke (best known for  The Bothy Band) of Ireland, and Christian LeMaitre (member of Kornog) of Britanny, but André replaced Cunningham, who died in 2003. The Celtic Fiddle Festival will tour the US again in April, but Santa Cruz is as close as they get to Los Angeles.

André recorded Reel de la Guimauve with De Temps Antan on the CD Ce Monde Ici-Bas (see the FolkWorks review written by my daughter in the Fall of 2013). Reel de la Guimauve is the first tune of the track Les 3 Archets, a track that compiled tunes from 3 different French Canadian fiddlers.

As explained in the CD review, a ubiquitous feature of Quebecois fiddle music is foot percussion. Here is a YouTube clip of André’s solo version, which I recorded last summer. It exemplifies the type of foot tapping in that style.

Below is a transcription, which is straightforward. Reel de la Guimauve is fun to play and sounds good even without foot percussion – which I’ll never be able to do anyway. But listen to André’s version and particularly the rhythmic phrasing, kind of a shuffle. These details are never notated and are difficult to convey (whether transcribing or reading) in notation and much easier to imitate by ear. Yet they are an essential part of the music. 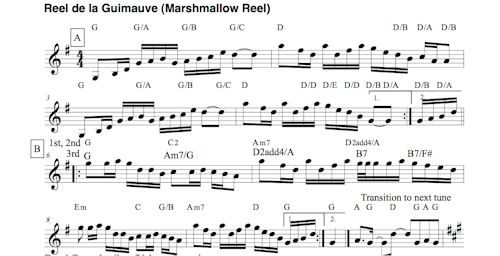 REEL DE LA GUIMAUVE: A QUEBECOIS REEL FROM THE PLAYING OF ANDRÉ BRUNET