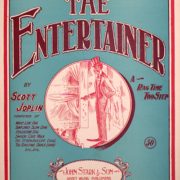 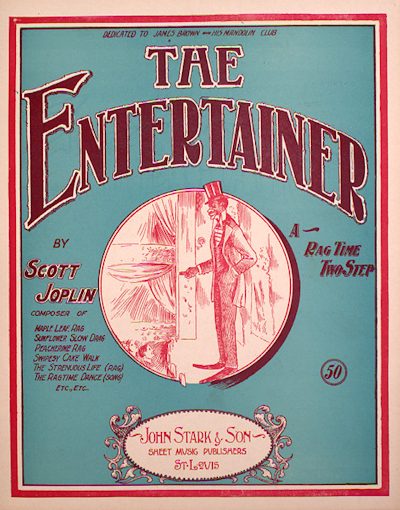 Ragtime’s heyday was around the turn of the previous century, when ragtime composer Scott Joplin found success with Maple Leaf Rag (1899) and The Entertainer (1902). The ragtime craze subsided before too long, although ragtime left a lasting impression on jazz and maybe on Brazilian Choro (another amalgam of European and African styling and rhythmic influences that has many similarities to ragtime). Ragtime never went entirely away, most piano students at one point stumbled across The Entertainer and a few ragtime influenced tunes survived in old-time music, but it remained a fringe style even during occasional revivals.

I recently started studying tunes that seem to be at the boundary between the “classical” ragtime style of composers like Scott Joplin and his contemporaries and old-time string band music. There is a jazzy tinge to this music and the musical ideas are more complex than in Appalachian old-time. And I’m not the only one who seems to have rediscovered this style.

The Temple Street Quartet is a Los Angeles based string band that plays an eclectic mix of musical styles from the late 19th and early 20th century. The group includes Frank Fairfield, Zac Sokolow, and David Elsenbroich, who alternate between guitar, fiddle, mandolin, and banjo, along with Jake Faulkner on the double bass. They are not limited to American ragtime, but also play Brazilian choros, tangos, and Italian parlor music from the ragtime era. This video from the 2019 Topanga Banjo Fiddle Festival captured the rendition of the Red Pepper Rag, a 1910 composition by Henry Lodge (Frank on resonator guitar, Zac on regular guitar, David on banjo-mandolin):

There were many stringbands in the 1920s that played ragtime in a slightly more primitive style. Often they are categorized as Old-Time, but I feel that it is almost a category by itself or at least somewhere intersecting the classical or parlor style and dance styles. The East Texas Serenaders, a band that included guitar, banjo, fiddle, and 3-string cello, clearly feels different from folk music and a step towards jazz/swing; more a precursor to Western Swing than Appalachian old-time fiddle.

Another recent video comes from the Down at the Yard concert series. San Francisco’s Skillet Licorice, with LA’s Kelly Marie Martin on bass and San Diego’s Clinton Davis on banjo, perform the East Texas Serenaders’ 3-in-1 Two Step.

I have learned a few tunes from The East Texas Serenaders and similar 1920s stringbands myself. Adding these ragtime tunes to my repertoire was a challenge, but they provide a nice complement filling a niche between Celtic/Old-Time fiddle tunes and jazz. It is a genre that my daughter and I play quite a bit together. Our mandolin duo version of the Mineola Rag, recorded probably late 1920s by The East Texas Serenaders. Mineola is a small down about 80 miles east of Dallas.

In written form, many of these rags, cake walks, stomps and marches are featured in Steve Parker’s Ragtime for Fiddle and Mandolin book. He has arranged 124 tunes for fiddle and mandolin with chords. Everything is written out in standard music notation. This is the most comprehensive book on ragtime tunes that I have seen, including the classical piano and novelty rags, string band tunes, and some newer compositions (all the tunes mentioned in this column are in the book). Many of the tunes are little known, though. They vary in difficult and a novelty rag like Russian Rag requires virtuoso skills – like mandolinist Dave Apollon who performed this in the 1930s. But most are fairly straightforward, although technically more challenging than most old-time or Irish tunes (more chromatic and surprising syncopation). Steve died years ago, but his website is still alive and possibly you can get the book here. Elderly Music has the book in stock as I’m writing this.

To finish this column, here is a fresh local rendition of the most famous ragtime of all times, Scott Joplin’s The Entertainer. Once again the Temple Street Quartet, from a performance at McCabe’s: