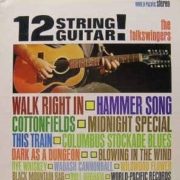 RECORDING AND PLAYING WITH TOYS 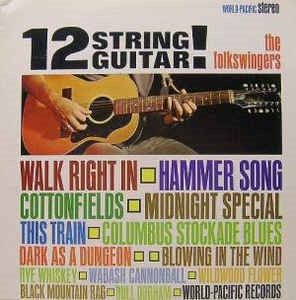 As a “folk musician” I have generally eschewed the use of guitar pedals. You know, wah wah and echo and distortion and that kind of thing. The acoustic instrument usually strives for a tone that wants to be portrayed as clean and pure. Since I have often flirted with other genres of music, over the years I have purchased a few pedals, all with the same result. I love them, I use them a lot at first and then they reside in a closet at home. But technology has improved effects that work with the acoustic instrument and I’ll chat about two different pedals and how they may be of some value to the acoustic musician.

I love the sound of the 12-string guitar. My dad bought a record called, “12-string Guitar! The Folkswingers” on World Pacific Records in 1963. It featured Glen Campbell on the 12-string, and The Dillards backing him on mandolin, banjo and bass. The tracks were instrumental versions of 12-string hits of the day: If I Had a Hammer, Walk Right In, and Cottonfields. Toss in the fact it was on translucent colored vinyl, and as a kid I was transfixed. The deep, jangly sound of the 12-string was world changing. I loved 12-string players like Fred Neil, Tim Buckley, and, eventually, Roger Jim McGuinn. And when I was in high school, I finally purchased a Martin 12-string and was in heaven. For a while. 12-strings are difficult to keep in tune, and to my ear, an out-of-tune 12-string guitar is awful, more awful by 6 than an out-of-tune standard guitar. I ended up trading the 12-string for an electric 6-string, late one night just before midnight closing at my local Wallichs Music City. And I have owned other 12-strings, and suffered the same fate, other than dealing with Wallichs Music City.

Over the years, there have been several attempts to make a pedal that provides a 12-string sound from a 6-string guitar. Most were based on adding an octave tone to each of the 6-strings. The inherent failure here is that the B and E strings on a 12-string are not octaves, they are in unison. But technology comes to the rescue. There are several of these items available. The one I chose does a great job of emulating a 12-string when used with an electric guitar, and not quite as good with most acoustics. However, the acoustic use still is highly acceptable, though I would probably not use it as a solo artist in a coffee house… but would in ensemble. The pedal I obtained, the Digitech MOSAIC 12-String Polyphonic 12-String Effect Pedal, also adds some interesting colors when used in a moderate setting. Almost organ-like overtones are emanated from those octave notes and true and false harmonics. I used the pedal almost immediately upon receipt (directions? What for?) on a recording, and during the playback of the first track using the device we noticed some ghostly organ playing “behind” the guitar. Since there was no organ in the studio, this was a bit perplexing. But we figured it out, and I have used the effect in place of an organ on a few tracks since.

Another pedal I recently purchased is the Digitech DROP Compact Polyphonic Drop Tune Pitch-Shifter. Apparently all guitar pedals have to have long names [Editor’s note: it seems they’ve noticed this.]… This pedal serves as sort of a reverse capo. You can drop the 6-strings of your guitar (or 4 of your bass) a half step at a time. So that song you love to play in G but need to sing in F is easy peasy. You just twist the knob to drop two half steps. Now the E string of your guitar is sounding a D through the speaker, the A is now a G, and so forth and so on. You can drop a full octave and do a fairly decent imitation of a bass. You can drop just a few steps and replicate a baritone guitar. And this pedal has an octave setting that also replicates a 12-string, but with octave B and E strings. There is a drawback for acoustic instruments. The pedal changes the pitch of the strings coming through the speaker. It does nothing to the actual pitch of the strings, so the result can be very discordant. You have to make sure that the volume of the altered tones coming from the speaker drowns out the acoustic tone. This is not too difficult.

I think these two pedals work well together. Since many 12-string guitars are tuned a full step lower than standard, we’ve grown use to that sound as being a 12-string… like the sound Glen Campbell got on the “12-string Guitar! The Folkswingers” or Erik Darling got on “Walk Right In.” So you use the Drop Tune Pitch-Shifter to lower the tuning a full step, and then run that signal through the Mosaic 12-string effect.

If all these two pedals did was to emulate a 12-string, they would still be cool. The total cost of both pedals is well below what even a poor 12-string guitar would cost, and the pedals offer flexibility of sound well beyond just a 12-string.

Most likely I’ll use these more in recording than live performance, but I did use the Mosaic at a gig recently and enjoyed how the opening of Feel A Whole Lot Better sounded a lot like the original recording… a jangly 12-string.

There are a lot of toys out there, and prices are often not too painful. Enjoy.

Make it a point to purchase some form of recorded music this week. Even a cassette. Support live music and live music venues. Tell a friend. Skip dessert. Eat your vegetables. Put away a few bucks for a rainy day.

RECORDING AND PLAYING WITH TOYS