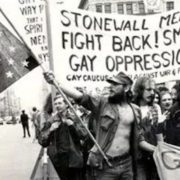 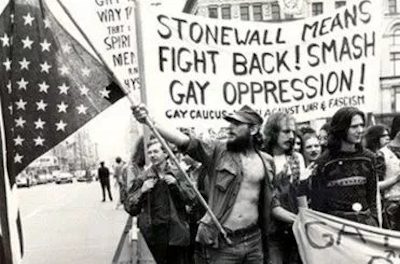 The month of June is celebrated by many members of the LGBTQ community and their allies as “Pride Month,” which commemorates the June 28, 1969 Stonewall Riots in New York where patrons of the Stonewall Inn bar rose up against the police. In those days, such establishments were routinely raided for crimes ranging from unspecified “disorderly conduct” to cross-dressing (illegal at that time). [1]

There are a wide variety of musical genres represented by LGBTQ performers, including folk music. My definition of “folk” comes from the late, great co-producer of Folkscene on KPFK, Roz Larman, about whom it was said “If Roz liked it, it was folk.” [2] I think that Roz would like these featured LGBTQ artists.

Joellen Lapidus is not only a dulcimer player but also a dulcimer maker who has created these instruments for many other performers, including three for Joni Mitchell. Also a teacher and innovator, she has introduced the dulcimer to multiple musical genres. The beauty of an online column is that I can let the music speak for itself so here you go:

Joellen sings in the folk tradition as well as playing the dulcimer. Here’s her original song about growing up in Brooklyn, the granddaughter of the owners of a local chicken market (with lively audience participation:

And finally, a personal favorite of mine, A Place in the Choir:

Though she is best known for the dulcimer, she also plays the clarinet and accordion, using these talents in her performances of klezmer music, most recently with her band Schmaltz. Much more information may be found on her website.

Eli Conley teaches and performs in the San Francisco Bay area. He also tours from time to time; his tour earlier this year took him from Virginia, where he was born and raised, to Brooklyn, New York. He hopes that in the future he will tour in other areas including Southern California. His latest album is called Strong and Tender and here is the title track:

He is also a transgender man committed to social justice and facilitating peoples’ understanding of one another. This informs much of his work, particularly this song (also on the Strong and Tender album) entitled What I’m Worth:

Eli’s background includes study of classical singing at Oberlin Conservatory and jazz vocal performance at Berklee College of Music. In addition to private voice lessons, he presents group classes and workshops primarily in the Oakland area. In furtherance of his social justice work, he sees music as a way to bring diverse people people together “to build community and strengthen organizing for social change and collective liberation.” There is much more about Eli Conley on his website.

A prolific folk performer SONiA has recorded multiple albums and frequently tours both in the U.S. and internationally. Earlier this year she toured through Germany to celebrate the release of her 19th CD entitled By My Silence.

She first began performing with her sister CiNDY (Cindy Frank) as “disappear fear,” releasing their first album in 1988. Other members later joined the band but eventually CiNDY gave up touring in favor of family life with her children. SONiA continues to use the recognizable name, and concept, “disappear fear.”

SONiA has always been concerned with social justice and has received numerous awards for her work in this area. Growing up in Baltimore, she became acutely aware of the disparity between the wealthy, powerful Washington elite and the disadvantaged citizens in their midst. Here she is, describing this eloquently in song:

While so much of her music work deals with calling out injustice, her latest release focuses upon her Jewish heritage and the rise of anti-Semitism. While I usually like to post videos of actual performances, this video of the song By My Silence (written by Ellen Bukstel and Nick Annis and inspired by the well know poem written by pastor Martin Niemöller) is particularly powerful and moving so I share it with you here:

A brief column can’t possibly give you the entire story of SONiA nor can it tell you all there is to know about Joellen Lapidus or Eli Conley so please check out their websites. SONiA’s may be found here.

And, as I learned in 14 years of co-producing the Audiofile feature for the international LGBTQ radio magazine This Way Out, there are many more “out” there. If you are interested in knowing more, Audiofile has a complete archive of all of our features.