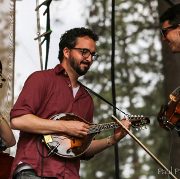 Connor Vance is a professional violinist, the fiddler in the international touring roots band Dustbowl Revival, and a judge at the Topanga Banjo Fiddle Festival. I first met Connor Vance when he was in elementary school. At that time, I organized the entertainment program for school fundraisers at the time and tried to involve kids as far as possible in the entertainment program. Part of that was teaching an afterschool fiddle class so students had some traditional and appropriately sounding material for the school’s Cinco de Mayo event. Connor (and also his brother and dad) became regular performers at the Will Rogers Fall BBQ and the Cinco de Mayo. Recently I had a chance to catch up with Connor, probably about 15 years after the first elementary school performances?

RS: You’ve come a long way since the Will Rogers Elementary School Hoedown performances. I just checked one of your vids with Dustbowl on YouTube and “Never had to go” already has more than 2.5 million views! What have you been doing the last few years and how do you identify yourself as a musician?

CV: I went to college at UCLA as a music major and graduated with a degree in classical violin performance. There is definitely a classical musician side to me, although I started performing with The Dustbowl Revival even in college. My identity is a mix of clean classical technique and rhythmic hoedown abilities. I’ve learned how to use each side of this dichotomy to help the other. My fiddling can be articulate, but my classical playing can also have strong rhythm.

Actually, fiddling helped me probably to get into the classical music program at UCLA. Following Wieniawski and Bach, standard classical fare, there was a request for some improvisation at the end of my UCLA entrance audition. I played Sweet Georgia Brown, a la Stephane Grapelli, and my French violin professor Guillaume Sutre was quite fond of Stephane Grapelli!

My time at UCLA was immensely helpful in getting me to pull my violin playing together. Both Professor Sutre and Professor Pogossian’s teachings are still guiding me to this day. Violin aside, I learned the balance of touring as a musician and attending university at the same time.

RS: Studying classical music is the normal route for a music student, even in public school. How did you get into folk music?

CV: Certainly there was your influence because you taught the entire neighborhood how to enjoy bluegrass, southwestern, Celtic, and trad. jazz, among other styles. This was refreshing, having live music brought into the living rooms of the neighborhood. These informal gatherings were an exquisite way to meet the neighbors and engrain music into our daily lives.

While these informal jams may seem rare in the classical world, they do exist! At my violin teacher Guido’s chamber music parties, I saw classically trained musicians enjoy their own jamming. While the repertoire may be completely different, the gathering atmosphere was so similar. Musicians and non-musicians would gather, eat, drink, and spend the night enjoying their favorite works for chamber ensemble.

This social aspect is so important and most people do not get to experience this aspect. Music can (and should) be far more than going to see a produced concert as a passive audience member. You can have people over for dinner and a jam without formalities, contracts, or waivers to sign. For a musician at any level, this is a hugely important way to learn music. So much of my musical knowledge is from my peers (i.e. people playing instruments) of all ages. This is not to discount the public school music program that got me into violin from the very start or of professional teaching. We are so lucky to have such a strong music program in Santa Monica. I owe so much to Joni Swenson, Angela Woo, and the late Deanna France for guiding my musical growth at school.

RS: Now you are touring and making a living as a musician full-time. What is this like for you?

CV: Yes, working with The Dustbowl Revival is my job, but it sure is a fun one. Every show is a party; a communal experience. This experience isn’t possible listening alone through earbuds on a laptop. It’s a treat to build this party on a nightly basis.

Touring obviously has challenges, notably getting enough sleep and being away from my home. Travel may be endless and that can get tedious. Last week alone, we played shows in Colorado, Missouri, Illinois, Michigan, and Ohio. But at least for now, it’s a great way to share music and discover all kinds of people and places. Luckily, it is a blast to perform the music we play. The audience claps, sings, and dances the whole way. In the band, we bounce off of each other a lot, making every show a bit of a jam.

Outside of Dustbowl sets, I love festivals. There are so musicians together in one place, creating endless opportunities to meet people from all over the world. We’ve had a great time with Mustered Courage bluegrass from Australia, and Söndörgö, an enormous string and reed band from Hungary. Of course, we’ve also shared amazing jams with phenomenal musicians from all of the states, as well!

RS: What is your favorite festival? Local or worldwide…

CV: Topanga Banjo Fiddle Contest/Festival is my favorite festival and competition in Southern California. Growing up, TBFC became an exciting opportunity to practice competing, and meet other folk music aficionados in the area. The family friendly atmosphere and low pressure were optimal for us beginning our folk music adventure. Friends I made at TBFC show up all over the country at other festivals. I still keep TBFC on my calendar and I am now a regular judge for the contest.

There are many festivals all over the country that are similar in that they build a welcoming community with appreciative crowds, often built off camping. Each of the festivals is proud of the welcoming communities that they have built. Nightclubs and bars cannot quite achieve that same feel.

My favorite festivals outside Los Angeles include Strawberry Music Festival (Northern California), Live Oak Festival (North of Santa Barbara), Albino Skunk Festival (Greer, NC), and the WinterWonderGrass festival duos in both Tahoe, CA and Avon CO. New festivals are popping up, like the energetic Otis Mountain Get Down in the woods of upstate New York.

RS: How does your playing differ in Dustbowl from jams? What do you do in Dustbowl differently?

CV: In a group of eight musicians, I’ve learned the importance of joining the groove, even on a melodic instrument. We play a lot of New Orleans styles, which is not a traditional setting for a fiddle. Sometimes I play my violin just like a clarinet would fit into this ensemble, alongside our trumpet and trombone players. People have called me out, saying “I’ve figured you out! You’re the clarinet player!” During our soul and rock tunes, I’m a rhythm guitar. My other stylistic hats are organ, blues harp, accordion, and triangle, depending on the style. Occasionally I play like a normal fiddler.

In our bluegrass renditions, such as Cherokee Shuffle (with lyrics!), we mix New Orleans jazz syncopations into the otherwise bluegrass groove. Daniel, the mandolin player, and I have learned to tap our feet on beats two and four, not downbeats. Post show, Daniel and I occasionally shred a few fiddle tunes with each other to vent out some of our bluegrass steam.

RS: Any recommendation for people who want to get into fiddle music?

CV: My highest recommendation is to find a few friends to jam with on a regular basis. There is so much knowledge to be found by hanging and playing with others. I believe it is necessary to nurture this community aspect from the very beginning. This gets you out of the classroom and makes it a social experience. Even if your peers aren’t great musicians, there always is something to learn from playing and building music together. For me, sharing is the most enjoyable aspect of music.

Performance-wise, busking breaks down the fear and nerves of performing very quickly. It also builds a generous humility in a musician, to be playing on streets without monetary requirements. A lot of the music that folk musicians play was born in living rooms and streets. It makes sense to continue this practice at the heart of a musician.

Check out the latest video from Dustbowl Revival, featuring the title track from their latest release: