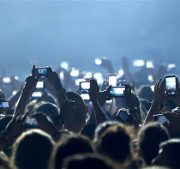 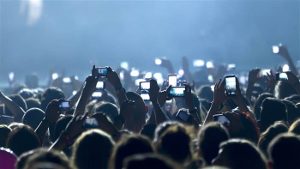 Fair warning: this is going to be rant, an Andy Rooney on steroids, a long “keep off my lawn” kind of thing.

I recently attended a solo acoustic “evening with” event at the year old Musco Center for the Arts at Chapman College in Orange, California. It’s an incredible facility for a variety of events. This particular evening featured country superstar Vince Gill. We’d seen him with the Time Jumpers at the Musco back in October, and apparently he loved the place. He said he saw an open Saturday and told his people to contact the Musco. It gave the audience a rare chance to see Gill in a venue he referred to as a “really big living room.”

Although the Musco sits a few over 1,000 folks, it does so in a very intimate manner on three levels. Every seat is excellent. And as with most events today, the program and the introduction/ announcement clearly stated that all electronic devices needed to be in the off position, and that no photography or visual taping was allowed. They even stressed that phones be turned off rather than placed on vibrate because vibration can still distract concertgoers. Hurray for them.

From my vantage point of one of the highest seats in the house, I could see when someone turned on a phone or tablet, but during the two and a half hour concert, it was rare: except for a seat in the front row. The young lady in the aisle seat kept her large phone or small tablet on pretty much throughout the event. I was thoroughly surprised that no one near her alerted an usher, but the ushers have a tough call. Will engaging the culprit distract more than the use of the device, especially in the front row?

The young lady appeared to be recording the show. She was Mr. Gill’s biggest fan, or at least she yelled that to him a number of times. She leapt to her feet after almost every song for a one person standing ovation. Perhaps she was so excited to be there that she forgot that about 1,000 other folks were also at the concert. I was able to tune the tablet out and enjoy the show but as a certified curmudgeon I still had to grumble under my breath as we left the venue.

A few months back I attended a fantastic Dave and Phil Alvin show at the Ruth B. Shannon Center for the Performing Arts at Whittier College in Whittier, California. Another great spot for a wide range of events, this venue is even more intimate at about 400 seats. Perhaps for that reason the information regarding electronic devices was stressed even more. More importantly, the reasoning went beyond the potential for disrupting your neighbors, but also about really being there for the event. Can you really experience something through the viewfinder? Will the 6-inch recording bring you as much pleasure as the fully-focused memory?

Attend live music events. Pay attention and shut off your phone. If you feel the need to annoy someone, use the internet or visit your family. Pay particular attention to college campuses as great live music venues.

PUT DOWN YOUR PHONE