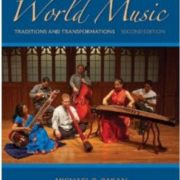 A Primer for World Music Lovers (and Students) 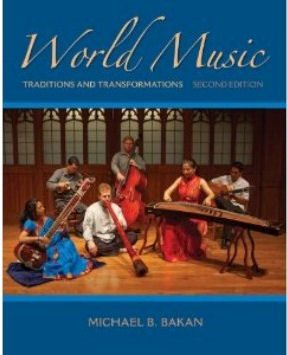 To connect with a book, sometimes it works to start reading in the middle. This was true for me when I first opened Michael Bakan’s World Music: Traditions and Transformations.

Actually, I had been saving it to read and review last summer when I would be recovering from carpal tunnel surgery and would have the time to tackle the University of Florida ethnomusicologist’s 377-page Second Edition. However, an opportunity to dive into it arrived when I needed to prepare for an interview with a Middle Eastern master multi-instrumentalist. Here was a challenge I had faced before — interviewing someone from a musical tradition with which I had little familiarity. In these situations, I often turn to my Rough Guide books since I have little time to consult multiple sources. Rough Guides give a reliable overview of a musical genre’s history, identify master contemporary practitioners, and analyze current trends. One can seek out representative recordings based on their discographies or even get the Rough Guide CD for super-easy reference. In terms of doing one’s journalistic homework, who could ask for a more efficient way of getting up to speed?

Who knew that a different kind of guide, a deeper guide, had emerged from Professor Bakan’s experience as head of Ethnomusicology/World Music in the College of Music at the University of Florida?

For some reason, before digging up my Rough Guide, I reached for the pristine review copy of World Music: Traditions and Transformations that had been sitting on the shelf above my desk for a couple of months. Leafing through it, I hit Chapter 12, “From Baladi to Belly Dance: Rhythm, Dance, and Music in Egypt and Beyond.” Jackpot! The introduction assured me in clear, virtually conversational language that the “beyond” would include music of the Middle Eastern takht ensemble with its intricate melodic modes, distinctive instruments, and refined forms and styles. This was what I needed to reference:

“Our examples in this domain, Ahmed Mukhtar and his takht ensemble, hail from Iraq rather than Egypt. A heavy metal band from Iraq that is now based in the United States, Acrassicauda, will be discussed as well…” (P. 285)

The contemporary angle, though not relevant to my article, intrigued me. Photos of performers and a friendly layout that did not skimp on white space helped convey a text dense with juicy world music material. (I know, some of us get our jollies in odd ways.) I loved the pronunciation guides placed strategically in the margins near the relevant text. The bold, blue sans serif print bolstered my confidence:

Cool. Now I wouldn’t worry about sounding like a dumbell because I didn’t know how to pronounce dumbec.

Chapters 7 through 13 place musical traditions in their historical and cultural contexts. Chapter 12 features two pages of comparative charts showing significant events in the world of Egyptian music alongside historical/political events. For example, after King Faruq’s constitutional monarchy was established in 1922, the period of relative stability ushered in a golden age of Egyptian star performers, among them the great songstress Ulm Kulthum.

The significant features of musical genres receive balanced treatment. Certainly one could read multiple books and articles on each genre, but Professor Bakan introduces the essential concepts and terminology in just enough depth for us to know how to search for more information if we wish. The section titled “Arab Music and the Art of Maqam” provides a crystal-clear description of the modal system known as maqam. We learn of the musician’s palette of microtonal pitches, the instruments in a typical takht ensemble, and the background of the musician who plays the ‘ud on track 15 of CD #1, the first of four CDs that accompany World Music: Traditions and Transformations.

Incidentally, the musical selections are first rate on many levels. Not only are they well-chosen, well-mastered examples of different kinds of world music, but they also draw on the cream of representative musicians. Thus, we hear Ravi Shankar playing the sitar as well as explaining the unfolding of a raga. In Africa we encounter the Senegalese jeli kora player Seckou Keita and Benin-born world-pop vocalist Angélique Kidjo.

What also delighted me were Bakan’s notes on each musical track. He tells us what to listen for, drawing on the foundation of musical concepts and terminology he covered in Chapters 1 through 6 plus the specifics introduced about the world music under consideration. Here’s an example from Chapter 8, “From Baladi to Belly Dance…: “

“The ensemble passage from 1:35 to 2:08 is followed by a brief ‘ud taqsim with rhythmic accompaniment…from 2:09 to 2:22. In this passage, Mukhtar skilfully modulates from the original maqam called Hijaz (which is sometimes identified with “distant desert” locales and imagery)…”

The cherry on top of the musical analysis sundae is the “Guided Listening Quick Summary” for each track, with major features of the performance punctuated by timings, all presented in digestible bulleted points.

I have rarely read a textbook for pleasure. This book is the exception. Yes, it is a textbook. Each of the thirteen chapters concludes with a summary, glossary, study and discussion questions, and suggestions for applying the concepts just taught. If you’re using the book as a reference, you’ll be tempted to skip the academic-sounding “Resources for Further Study” sections. Resist that temptation! Those “Resources” sections hook you into Bakan’s On-line Learning Center and gain you access to more musical examples and analyses.

The approach that permeates World Music: Traditions and Transformations is what Bakan calls “musicultural.” Drawing on John Blacking’s definition of music as “an expression of human experience,” he sees a musical tradition not as a set of standards by which contemporary musical developments should be measured but as “a process of creative transformation whose most remarkable feature is the continuity it nurtures and sustains.” (Page xxxi)

This book is aimed at college students, but I believe that Professor Bakan’s musical approach could engage students as young as middle school level. Children could learn the musical basics covered in his six foundations chapters and then discover music from other parts of the world, learning how to listen without the preconceptions that so often hamper adult learning. Wouldn’t that spice up social studies classes!

On the other end of the learning spectrum, I discovered that this state-of-the-art world music primer does very nicely outside the classroom. It can serve as a reference for the older (bolder) set, those of us seeking greater understanding of the music of other cultures and even writing about it. The first six chapters are a good way to revive your music theory chops, too.

I don’t think Professor Bakan will mind if I share the website for his On-line Learning Center. He also makes available his personal website to share his latest discoveries and resources. World Music: Traditions and Transformations is published by McGraw-Hill.