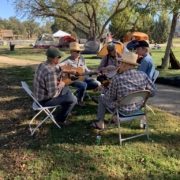 The Pozo Old-Time Gathering in November was my first overnight music event since the start of the pandemic. The Old Time Music Gathering is a 3-day campout organized by the SLO County Stumblers and held at the Pozo Saloon in San Luis Obispo County. I believe it was the third time this event was held, but my first time there. Admission is free, but you pay for camping or taking workshops.

Pozo is an unincorporated area surrounded by the Los Padres National Forest. The closest town is Santa Margarita, about 20 miles away on a winding (but paved) road. The shortest route from LA involves some rougher dirt/gravel roads through the National Forest from the east. The original Pozo saloon opened in 1858; then Pozo was a busier place as it was on the stagecoach route connecting the San Luis Obispo area with the central valley. 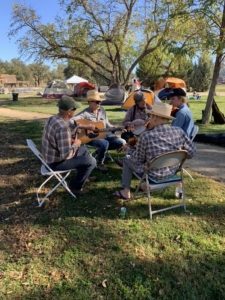 Jamming was the main activity, but there were workshops and band showcases on Saturday evening. I arrived Saturday later in the afternoon when the temperatures were pleasant (the days were still hot and the nights frosty). Three or four jam circles were going, the number of people playing was probably in the 30-50 range.

Tent camping was available on the grassy area behind the saloon for $30 a night and there was plenty of space. It is primitive camping, only porta-potties, but that is much more pleasant than having to share space with RVs running generators. 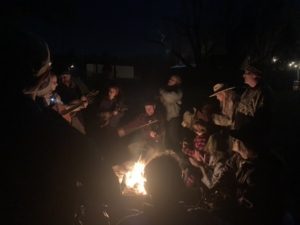 The focus were old-time tunes from the Southeast, but there was also jamming on bluegrass tunes, country songs, some Celtic tunes, and some Southwest tunes. The Southwest tunes primarily came from the repertoire of the Gu-Achi Fiddlers, which is a small niche even among Southwest fiddle tunes, yet one with an outsized impact. I have heard the Gu-Achi tunes in jams from San Diego north to Port Townsend in Washington and east to Denver. The Gu-Achi Fiddlers were a twin fiddle string band from the Tohono O’odham Nation in Arizona (the Gu-Achi district is about halfway between Tucson and Organ Pipe Cactus National Monument).  Libby Bird Song Mazurka (I have transcribed it in a previous column), was re-recorded by the San Francisco Bay Area old-time band Skillet Licorice on their latest CD (fall 2021).

The Gu-Achi fiddlers tuned down almost a whole step, which gives the violin a different tone. Ben Guzman, a recent convert to Southwest fiddling, wanted to jam in the low tuning at Pozo, which we did on the first day. (Skillet Licorice also tuned down a whole step on their recording of that tune). However, it is a bit of jam buster as it makes it harder for others to join because without retuning they would be playing in C or F and can’t follow the fingering. I was ok to retune my fiddle, but not my mandolin. The next day, we stayed in standard tuning, though. 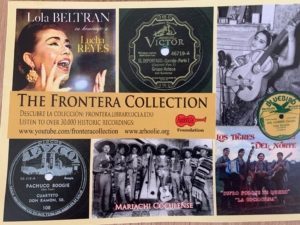 Tom Diamant played guitar during the Southwest jams at Pozo. Tom is with the Arhoolie Foundation, a non-profit documenting and preserving regional roots music (separate from Arhoolie Records, which now belongs to Smithsonian Folkways). Tom is digitizing the huge collection of Mexican-American records that Arhoolie Records’s founder, Chris Strachwitz, had stockpiled. As of now, its YouTube channel has 80,000 historic recordings with dozens added every day. https://www.youtube.com/c/FronteraCollection

That collection is much more than I could digest, but Tom gave me a few CDs that were more along my interest. And so more Southwest fiddle tunes, here is one from Texas:

El Gato Negro comes from the playing of El Ciego Melquíades, recorded in San Antonio in the 1930s. Traditional Southwest Fiddle styles (e.g. Arizona, New Mexico, Texas) sound a lot more Mexican (or Central European) than the better known Old-Time Southeast style (e.g. Virginia, Carolinas, Kentucky). Clearly, the influences and original sources were different even if in both cases European sources filtered through time and local sensibilities to result in new and unique styles of music. Although El Gato Negro is completely square, standard 8/16 bars, the phrasing seems to throw you off, but that is what gives this branch of old-time music a distinct Mexican flavor. If the picture is too small to be readable, below it is the link to a full size pdf. 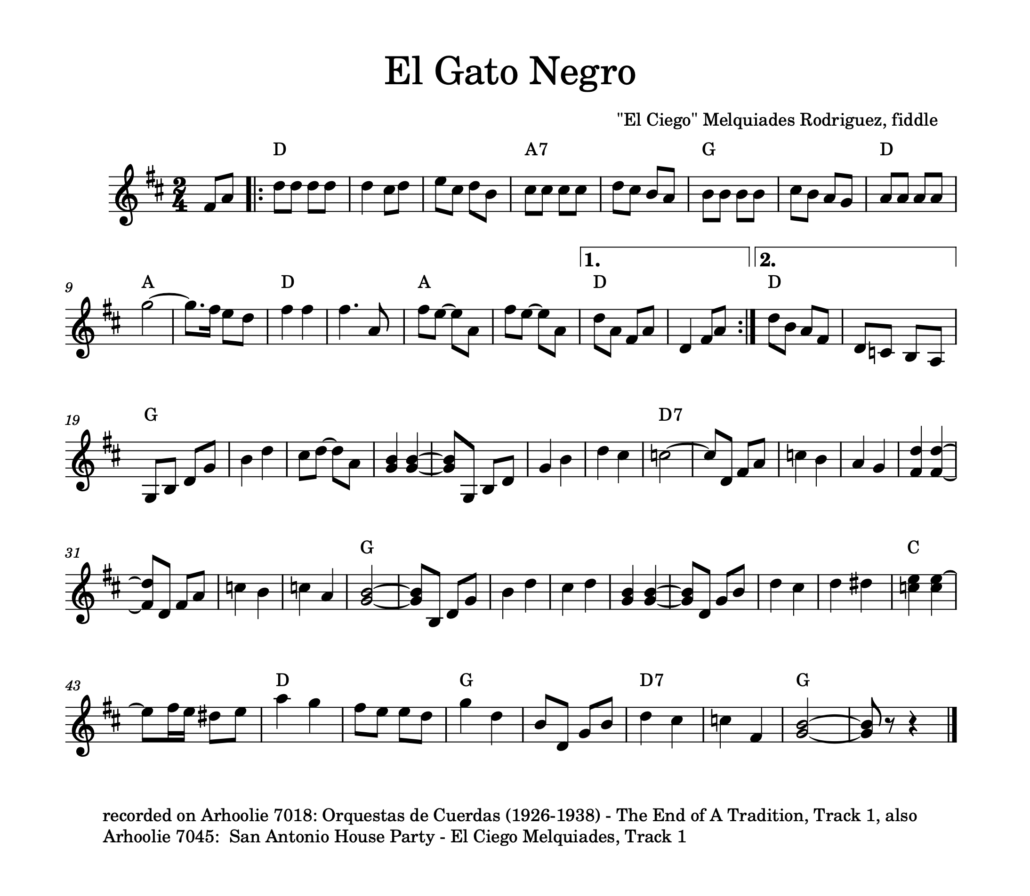 El Ciego Melquíades (Blind Melquíades) Rodríguez recorded in the 1930’s and ’40s in San Antonio. Once electric (rather than purely mechanical) recording technology became available in the late 1920s, record companies went on field trips across the country, setting up temporary studios in hotels to discover local talents. The Bristol Sessions that netted the first Carter Family and Jimmie Rodgers recordings would be the most famous example. By the time Melquíades Rodríguez was recorded, fiddle music was a fading tradition. In Texas, the accordion elbowed the fiddle aside and became the standard instrument for Tex-Mex Conjunto. Not unlike the Gu-Achi Fiddlers whose fiddle music had been superseded by Waila bands with saxophone, accordion, and electric bass for popular events by the time they were recorded.

El Gato Negro  is available on two commercial CDs:  Orquestas de Cuerdas (1926-1938)– The End of a Tradition, Arhoolie 7018 and El Ciego Melquíades, San Antonio House Party, Arhoolie 7045.  In contrast to the Gu-Achi Fiddlers, who were tuned down almost a whole step compared to standard 440 pitch,  Rodriguez is is about 2/3 of a half step sharp. So you can play along without retuning, here is a pitch-corrected (to 440) version of the first time through.