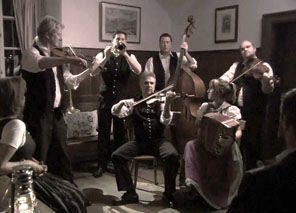 I have played music in bars. All kinds of bars. In California. And Oregon. And Washington. And Colorado. Nice bars. Clean bars. Terrible bars. Dirty bars. Fun bars. Not fun bars. I would always prefer the nice, clean and fun, but sometimes things happen.

Live music and bars go hand in hand. People go to bars to relax and drink. Relaxing to live music is a good thing. Dancing to live music is a good thing. So bar owners hire live musicians. The rules of the road vary wildly, since bars vary wildly. Urban centers often have trendy bars, the type where the bill for those two martinis requires a second mortgage on the old homestead. Small towns and neighborhoods have smaller, more traditional watering holes. Micro-breweries have added a new element for bar gigs, too.

Playing music in bars is different than other venues. You will encounter people who have consumed more alcohol than their bodies and brains wanted them to consume. They could range from friendly folks who just talk a little too loud, love you a little too much or are upset because you don’t travel deep in the Allman Brothers repertoire. They may want to sit in, play your Les Paul and leave little saliva things on your microphone. Tact and discretion go a long way in these situations, and most musicians aren’t known for tact and discretion. But music is supposed to be fun, so if you find yourself not having fun, then decisions need to be made. No one is forcing you to play bars, and many musicians do not. You can join that club.

Bar gigs are often long gigs, too. A few nights ago I played bar/roadhouse with a country band on a weeknight from 7:30pm until 12:30am, and those 5 hour gigs are not uncommon in country music. Trying to keep the set list fresh can be a challenge, as can be trying to motivate yourself at 12:15am while those last two rather inebriated couples stumble dance.

Which brings up a good point. The dynamic for a band gig in bar is hugely different from the dynamic of a solo gig in a bar. To play solo in bars, one must have a lot of self-confidence, a wide repertoire and possibly a small caliber pistol. As in any gig, it’s easier to find the energy/dynamics etc. in a group, or at least it is for most musicians. You can decide whether the money is best un-split, but for many folks dividing the cash in order to have some other musicians on board is well worth it.

Most bars book directly, though I have been booked by agents for a few bar jobs. But generally you’re dealing with someone who is also buying and serving alcohol, juggling service schedules, purchasing food, etc. Live music very well may be less than that individual’s main duty. Are you familiar with the place? I’ve played bluegrass in a bar that was expecting blues. Worked out okay, but there were a few tense moments, and a few folks that left looking confused. You need to have enough info to book intelligently. A nine piece band with four horns will not fit on a tiny stage in the corner of a tiny bar. You will have eight players upset with you on this one…

Let’s chat load in and load out. We can focus on the fun stuff on stage, but the reality is that most likely you’re schlepping a sound system, mike stands, guitars, etc. into the bar. Can you park legally and do so? Those $200 parking tickets kill the profit margin. Does the bar have a place to store your cases and bags that is secure? What’s the deal at load out? Most bars will have whatever staff is on board racing to stack the chairs and mop the floor, count the money and go home. You need to make sure you’re not in their way, but that you have ample time to tear down and load your gear.

What are you getting paid? Cash or check? Who is paying you if the manager goes home early? If it’s a check, is it made out correctly? We once had to take in a CD to the bank to prove that our band name was tied to one member’s bank account. Are you being comped food or drink? Did you run up a tab that exceeds your pay? Done that more than once…Were you served by a waitress? If so, tip her. She’s not there for fun, she’s making a living and even if what she served you was comped, it took her just as much time and effort as it did with the paying customers. Check the culture too… almost all bars let you put out a tip jar and sell CDs, but it’s best to ask if you are uncertain.

The goal is to leave for home having had fun, and entertaining the customers. It’s extra nice to go home with a few CD sales and a good jar full of tips, too.

When you’re out catching live music, tip generously. Tell your friends and family when you discover a new club or an artist you think they may like. Look both ways before you cross the street.