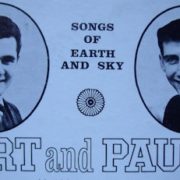 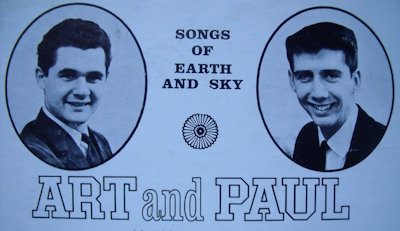 Sony Music (Columbia Records) recently re-released the original recordings made by myself and my partner at the time, Paul Potash. We were known as Art and Paul and our era was the early popular folk music revival – 1960 / 1961. I’ve written both serious and humorous vignettes about our experiences and escapades in this publication. We were well known in Greenwich Village and later here on the west coast and we were the very first folk music act to play the Troubadour when it was about to close. We broke up late in 1961 but we apparently left a mark on the music world and Sony Music has elected to memorialize us with the digital re-release of our two albums (today’s CD sales are diminishing ever so swiftly). Nonetheless, I’m overwhelmed at the confidence that Sony has expressed in the value of the music of Art and Paul. We were truly pioneers at the time, Paul and me, and we did what we did with our versions of traditional folk songs to add drama to the folk lyrics with our complex arrangements for audiences that were just being introduced to this new folk trend. Our albums, Songs of Earth and Sky and Hangin’, Drinkin’ and Stuff can now be accessed on Amazon, Spotify, iTunes, and the other streaming services with a search for “Art & Paul” or by the album titles. What was so surprisingly wonderful about the re-release, was the reaction we received from our friends in the world of popular folk music. Peter Yarrow, Noel Paul Stookey, Van Dyke Parks, Bob Stane, Tracy Newman, Mason Williams, and others. Their comments appear below this article for those who are interested in what we did. I’m humbled by their accolade.

Today, I listen to what we did back then and marvel at the extraordinary measures we took to make folk music available to the public. As mentioned, our arrangements were complex, the accompaniments meticulously crafted to cater to a public that was hungry for folk music but unsophisticated in the history and depth of the resource from which that music was drawn. The music from Appalachia and the Ozarks where banjos and dulcimers droned, the plains of Texas, the labor camps of the great depression where the disenfranchised howled, the streets of Europe where Hassidim danced, the alleys of the south where guitars were pounded to a beat. Music that was the both the voice and balm that soothed souls that often had no idea what tomorrow might bring. Music that changed political landscapes.

And at the bottom of it, music that evokes vivid pictures every time we listen to it, but comes alive even more vividly when we make it ourselves, alone or with others.

Yes, once upon a time a host of popular artists brought this music to us on stages with multi-colored lighting, professional theater sound systems, nationally released and promoted recordings, national television appearances – I was one of them. We all remember that era when the marquees in Las Vegas and other large concert venues were lit with the names of the likes of The Kingston Trio, The Limelighters, The New Christy Minstrels and more. Fans lined up for autographs and the national airwaves and TV sets echoed with Tom Dooley, This Land Is Your Land, and Leaving On A Jet Plane.

To be sure, we will always need dedicated new artists to bring fresh perspectives to us with their music. They will always be welcome guests, but it seems to me that the seeds that were sown in the fifties and sixties still flourish in our living rooms and back yards, when friends and family find release in making music. I would wager that because of that heady era of the folk song, there are more guitars, banjos, etc., in American households than ever before and I can look back at the sixties with pride and the satisfaction that we served the future well.

So, to those who now continue to enjoy the heady pleasure of making music without thought or care about fame and fortune, and to our FolkWorks readers who participate unselfishly, play on!

Some comments from friends about Art and Paul:

“The music on these albums, with their extraordinarily beautiful harmonies, which we heard Art and Paul sing live in the Greenwich Village coffee houses, both informed and inspired Peter Paul and Mary. Though they preceded our appearance on the scene by only a year or so, their music had a profound influence on us and many others and helped pave the way for contemporary folk music to add great richness to the landscape of American music. When you listen, you are listening to history, and an important part of the birth of the 1960s Folk Renaissance that evolved to become one of the most creative musical eras ever in America” – Peter Yarrow/ Peter, Paul and Mary

“…Art and Paul. Greenwich Village folk stalwarts at the Cafe Wha? Podell and Potash were their last names I came to find out eventually, but it was their musicianship, sensitivity to and affection for folk music that identified them to me. Years before Dickie and Tommy Smothers created an artform from their comedic misinterpretation of folk music, Art and Paul were demonstrating their admirable ability to create laughable characters within the framework of tunes like Hole In The Bucket and simultaneously maintain their credibility through an impressive repertoire of serious folk ballads. And all of this while maintaining great rapport with an often skeptical off-the-street audience. It is a memorable and valuable part of my performing history to have shared the stage with them in those early days of the Folk Music revival.” Noel Paul Stookey / Peter, Paul and Mary

“I discovered Art and Paul in 1961 or so. I was 19. I was already a fan of Bud & Travis. Art and Paul were brilliant in a different way. They were more theatrical. Paul was an actor with a dreamy deep voice, and a great all-around entertainer. Art was the brains, the musician and the wit. Together they had it all. I saw them at the Troubadour over and over again. Their act was timeless. Their arrangements were innovative and mesmerizing. I ripped them off and became a much better guitarist. I bought both of their albums and wore them out. I cried for days when they split up. – Tracy Newman / Emmy Award-winning TV writer/producer / singer/songwriter / adoring fan

“‘ART & PAUL’ just the name brings back those times of pleasantly aching nights when we could go to a club and hear “the real thing” with Art and Paul singing and playing our favorite folk songs. So new, so fresh and so good. There was something about their presentation of a set of songs that made us glad to be in the room. If we had known then that it was too good to last we would have put it in a jar and saved it forever. Now their best albums are being released again. What a miracle of good taste. This is like riding a time machine back to the era of the best music ever. A thank you to the gods of music….” Bob Stane / The Ice House and The Coffee Gallery Backstage

“I first played at the Troubadour on Santa Monica Blvd. in 1961. In those days plays went on until midnight. I saw a couple of Edward Albee plays “Jerry & the Dog” and “The Zoo Story”. Folk music started at midnight. I saw the greats there, Bud & Travis, Josh White, Nina Simone and Art & Paul were part of that great experience. I used to keep tabs on who was playing at the Troubadour and it if it was Art and Paul, I’d buy a ticket at the door! I made up a song about them based on the tune “Heart & Soul”, which went “Art & Paul, I fell in love with you”. I did as many others. I’ve been in touch with Art several times recently, he’s played some of my music on his radio show. Great to hear they’re back in town!” – Mason Williams

“Art and Paul forged the template for many folk duos that followed suit, less artfully, perhaps. I was honored to be in such company that defined the ‘60s” – Van Dyke Parks