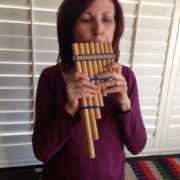 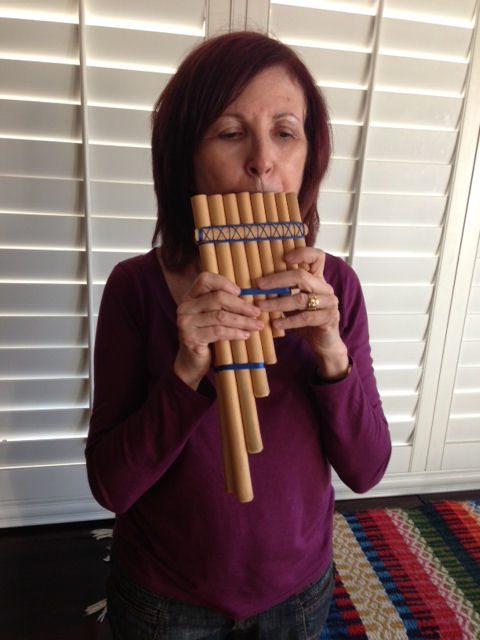 Nearly one year ago on a sweltering June evening in Riverside, I was waiting for a performance of Mayupatapi to begin. It felt as if the air-conditioning was not functioning in the small theater of the UCR Arts Building. Having been accepted into the graduate ethnomusicology program for 2012-13, I wanted to see a performance of the Andean music ensemble that I would be joining in the fall.

The members of Mayupatapi did not walk out on stage. They ran. Clad in black jeans and tops over which they wore heavy colorfully embroidered vests, they ran in a circular formation while playing the pan pipe.

I slumped in my seat. How could I ever hope to do what these ensemble members – young enough to be my children – were doing? Probably it was hotter under the spotlights on the stage than it was in the rest of the theater. Round and round they went for about three minutes until they came to a standstill and played the entire melody again with great verve.

Then Professor Jonathan Ritter, director of Mayupatapi, welcomed the audience and patiently acknowledged his young son who kept yelling, “Daddy!” during his introduction.

Mayupatapi, I learned, means riverside in the Quechua language spoken and sung by a large portion of the Andean population. The program was going to focus on Andean music of Peru.

In the course of the evening, the student musicians played the traditional sikuri pan pipe, the more contemporary mestizo zampoña pan pipe, the highly expressive quena flute, a lute called the charango, and an array of traditional percussion instruments. A local dance group performed Peruvian folk dances as well. But my abiding memory of the evening was that first sight of the musicians playing the pan pipe while running.

I already had purchased a zampona from Professor Ritter so that I could practice during the summer. He advised me not to be surprised if I initially felt lightheaded or queasy after a few minutes of playing. In fact, this did happen to me. But I practiced in short spurts during the day with a timer and by the end of July could play the odd sequence of notes on the pan pipe for up to half an hour, feeling in good form.

I didn’t have any actual pieces to play although I had tape-recorded the Mayupatapi concert. It was a mystery to me how you could get those melodies out of this instrument. Finally, bored with just tooting a series of notes, I decided to compose a melody using the notes that I could play. I even committed my tune to staff paper. The result sounded somewhat Semitic, so I called it Andean Klezmer. I was sure Professor Ritter would be impressed.

The summer of 2012 felt like a long drum roll preceding my entry into the graduate program in ethnomusicology at UCR. I was practicing my pan pipe, resurrecting my piano technique, and even reviewing theory and harmony.

Flash-forward to a Thursday afternoon in late September. I was discussing my progress on the pan pipe with Jonathan in his office. I pulled out my zampoña, thinking that this might be the moment to premiere Andean Klezmer.

“Too bad it doesn’t play a diatonic scale,” I commented, working my way into explaining the genesis of my composition.

“Sure it does,” he countered.

“I don’t think so.” I played the odd succession of notes.

With a grin, Jonathan took the zampoña out of my hands, turned it 180 degrees, and invited me to play. Tooting on one pipe haltingly after another, I produced a diatonic scale. I had been playing the instrument backwards all summer!

I wasn’t exactly back at square one. At least I had breath control and playing didn’t make me feel queasy. But it is taking me more time than I would have predicted to develop speed on the zampoña and on the more traditional siku while maintaining a pleasing tone. The latter is played in a hocketing fashion, which means one group of musicians plays notes in alternation with another group to form a complete melody. In the opening number I had witnessed the previous June, the student musicians had been running while hocketing.

By February I, too, was running and hocketing with my younger peers in preparation for Mayupatapi’s performance at the Society for Ethnomusicology Regional Conference to be held at UCR. Little by little, I found I could actually squeak out the melody while moving at a fast jog. I noticed that when we rehearsed, nobody wanted to stand at the front of the line to lead the running charge into the performance space. Somehow I found myself second in line, behind a confident-looking young man. Well, the young man did not show up for the SEM performance, and guess who led the charge? It wasn’t that bad. Actually, it was invigorating to feel I could do it.

Flash-forward to March 11 when Mayupatapi was about to perform at a Dean’s luncheon in the Humanities Building. As we lined up for our entrance, Jonathan asked who was going to lead. Ensemble members looked at one another uncomfortably. Suddenly I found myself saying, “I am the village elder. I will lead.” And I did.

As I complete my third-quarter at UCR, I look forward to the Mayupatapi performances at the Music Department’s World Music Festival on May 17th and the ensemble’s final concert on Friday, May 31 at 8:00pm. I pray that the air-conditioning in the theater works this time, but, come what may, I shall rise to the occasion.

By the way, no one has heard me play Andean Klezmer.

Audrey Coleman is a writer, educator and graduate student in ethnomusicology at the University of California, Riverside.