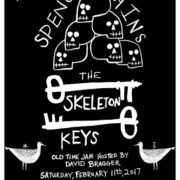 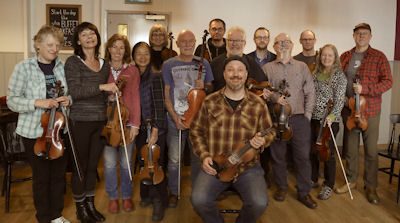 2016 was quite the year for us at the Tiki Parlour. We released critically-praised CDs and DVD sets from Bruce Molsky, Joe Fontenot, Spencer & Rains and myself. We filmed many musicians this year as well. We also saw the revival of the Santa Barbara Old-Time Fiddler’s Convention. In an effort to bring old-time music to a larger audience I took part in some amazing concerts and recording sessions with Social Distortion and Bad Religion’s Greg Graffin. This year also saw the birth of a new ensemble at UCLA: The UCLA Old-Time String Band Ensemble. We just finished our first quarter. The final consisted of a master class with GA old-time musicians Beverly Smith and John Grimm. Finally, the Tiki Parlor’s house band Sausage Grinder sent out Chris Berry and me to teach two intensive weekends of old-time fiddle and banjo in the UK for the FOAOTMAD organization. What a year, for many reasons! 😉

I decided to kickstart the new year with some epic old-time action. We’ll be launching 2017 off with several concerts. On January 7th, three local string bands (Sausage Grinder, Echo Mountain and Swing Riots) will be playing String Band Night at TRiP in Santa Monica. On January 19th, the Tiki Parlour is hosting a concert starring the modern west coast legends of old-time music, Foghorn Stringband. This will be immediately followed up with a special show on February 11th with Spencer & Rains. Howard Rains (TX) and Tricia Spencer (KS) will be performing with their six-piece string band The Skeleton Keys! This will be their Los Angeles debut. A show like this is a very rare treat. In addition to Howard and Tricia, the band consists of Bay Area banjo meister Brendan Doyle, old-time whiz Emily Mann and two of the coolest Georgia rhythm pickers alive, Nancy and Charlie Hartness. The band will feature their signature double fiddle numbers, dreamy old-time songs, harmony vocals and wild, obscure stringband tunes peppered with ukulele, accordion and upright bass!

The show will be preceded by an old-time jam at 7:00pm hosted by yours truly. Tickets are available now HERE! 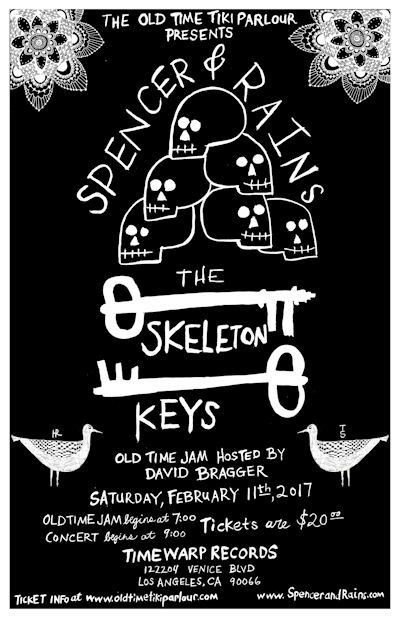 In early 2016, we lost a master old-time fiddler, Trevor Stuart. He and his twin brother Travis, although in their 40s, were already living legends of old-time fiddle and banjo music in North Carolina. Their music and warm friendly character are known worldwide. Trevor is deeply, deeply missed by all of us. Just before his passing, I had the privilege of filming him and Travis for a new Tiki Parlour set. It is due out in early spring. Here is the teaser video for it. Enjoy!